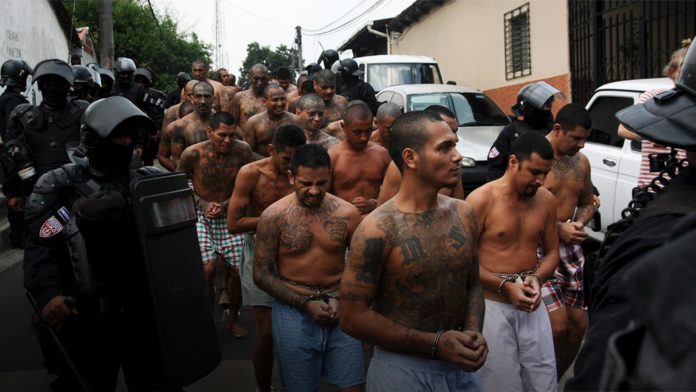 New York prosecutors have announced the arrests Friday of nearly 100 members and associates of MS-13 in what officials say is the largest crackdown against the gang in the state’s history.

The developments come following a two-year investigation involving law enforcement from the local to the federal level in Suffolk County, one of the gangs’ longtime hotbeds.

“The goal of this investigation was to deliver a major blow to the gang’s leadership, operations and recruitment in our region… we did exactly that,” Suffolk County District Attorney Timothy Sini told reporters Friday.

“This operation helped end the New York program,” he added.

Sini says investigators arrested 96 members and associates of the gang, who have been charged with crimes ranging from conspiracy to commit murder to drug trafficking to weapons sales. The ages of those arrested range from 16 to 59 and include U.S. citizens and illegal immigrants, he added.

Sources told the New York Post that most of the arrests were made Thursday and Friday morning.

Sini said throughout the investigation, authorities recovered drugs in gang members’ possession such as cocaine and fentanyl, as well as handguns and more than $200,000 in cash. Investigators’ efforts resulted in the arrests of the leaders of nine cliques of the gang operating in Suffolk County — and foiled seven alleged murder plots, he added.

“MS-13 is a ruthless, savage gang that commits acts of violence to recruit, retain and control its members and exact revenge on its rivals as well as to extort innocent members in our community,” Sini said.

At one point during the press conference, Sini held up a machete that he said was recovered during the arrests. “This depicts how brutal and savage this gang is,” Sini said.

MS-13, also known as Mara Salvatrucha, recruits young teenagers from El Salvador and Honduras, though many gang members were born in the U.S. The gang has been blamed for dozens of killings since January 2016 across a wide swath of New York’s Long Island – where Suffolk County is — the Los Angeles area and the D.C. suburbs.

MS-13 also has been singled out by President Trump for its brutality, which has led to a series of crackdowns by law enforcement.

Earlier this month, the FBI unveiled a new tip line in the hope of gathering information to combat the violence MS-13 uses to terrorize American communities.

“Our message is simple, law enforcement will do what it takes to protect our communities,” Sini said Friday. ” And to MS-13, we are coming for you.”