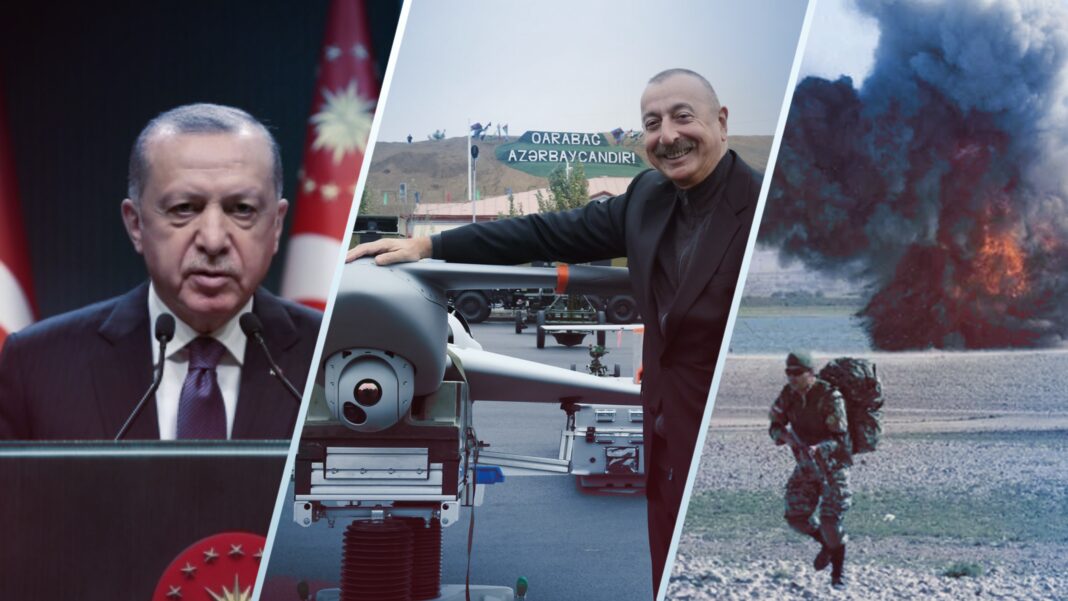 Iran and Azerbaijan continue to lead the news of the Middle East. Iran’s massive military drills along their border are a not-so-veiled threat against their neighbor. The Islamic regime persists with their threats demanding that the Azerbaijanis stop their interference in Iran’s truck transport and sever their ties with Israel.

Azerbaijan is not bowing to the neighborhood bully and has shut down the office of the representative of Iran’s Supreme Leader in Baku. In addition, they have added new restrictions for Iranian trucks seeking to pass through their country, and continue to strengthen their ties with Israel. A smiling President Ilham Aliyev even took a photograph on the banks of the Aras River, which serves as the international border between Azerbaijan and Iran, with his hand on an Israeli Harop UAV (drone). Transport planes shuttled military equipment from Israel to Azerbaijan, and a deal has been worked out for the purchase of the Israeli Arrow 3 anti-ballistic missile system. In response to Iran’s military exercises, Azerbaijan is in the midst of a military drill in their own country with Turkey’s participation called “The Steadfast Brotherhood 2021”. At the same time, they are participating in another exercise in Georgia with both Turkey and Georgia called “Eternity 2021”.

The military aid to Azerbaijan is only one of the reasons that Iran is claiming that war with Israel has already begun. Said Iranian Foreign Ministry spokesman Saeed Khatibzadeh, “Israel has carried out attacks that were intended to destroy our nuclear program for peaceful purposes. It murdered nuclear scientists and harmed Iranian people. Iran is accused of terrorism, but there is no good or bad terrorist. The whole crisis in the region is Israel’s fault.” So, there is “no good or bad terrorist”? Hmmm…spoken like a bad terrorist. Again, a reminder that this will be the topic of my Middle East Update “Has a War Between Israel and Iran Begun?”

While Iran’s suicide drones are operating in a campaign in the northern Syrian province of Idlib, at sunset on Thursday a UAV bombed a site of Iranian militias in the al-Bukmal area, near the Syrian border with Iraq. Also, just last night a shipment of short-range Iranian rockets and launchers were transported from Iraq to the city of Al-Miyadin, Syria and hidden inside an ancient fortress.

While Iran continues to stir up trouble with other nations, their own economy is tanking. Their annual inflation rate has reached 58%, which is the highest rate since the beginning of the Islamic Revolution in 1979.

China has been testing the waters when it comes to the airspace of Taiwan. Over a span of four days this weekend, 149 Chinese aircraft broke into the Taiwanese zone. The U.S. and other nations condemned the action, but it is difficult to not see this eventually ending in a Chinese play for the coveted Taiwan.

In a strangely intriguing story, a trove of offshore banking data was leaked. 650 journalists from 117 countries jumped on the 11.9 million documents, nicknamed the “Pandora Papers”, that implicated leaders of states and governments in corruption and tax avoidance schemes. National heads such as Jordanian King Abdullah II, Czech Prime Minister Andrei Babis, Kenyan President Uhuru Kenyatta, and Ecuadorian President Guillermo Lasso were all named along with other government and business officials. It will be interesting to follow the multi-national political fall-out of this story.

There is a lot of great Israel news this week. In two weeks, Blue Flag 2021 will begin. This is a biannual aerial exercise sponsored by the Israeli Air Force, which will be held at Ovda base, north of Eilat. Aircraft from Italy, Germany, Greece, France, UK, India, and the US will join host Israel who will have their F-35 stealth fighters taking part for the first time.

The Israel pavilion opened at EXPO 2020 in Dubai, UAE. This beautiful, technologically advanced display will be open for the next six months and will allow millions of Arabs to see Israel for the first time through unfiltered eyes. In a further step toward friendship, Israelis and Emiratis will be able to travel to each other’s countries visa-free starting next week.

The lovefest continues to grow with Bahrain, also. Two commercial flights weekly will now begin between Israel and Bahrain. Also, an official delegation from the country visited the western wall yesterday. While they were warmly welcomed by the Jews, the Arabs weren’t too thrilled to see them there.

After the US House passed the funding for the Iron Dome, Senator Rand Paul stepped in to delay the vote in the senate. His issue, however, was not the fact of the funding but the way it was being done. This is typical of the way that Paul operates as someone who is very concerned about the fiscal state of the US. His actions only delayed the vote, which could very well happen later this week.

Microsoft Israel Research and Development has announced that it will open a new campus in Tel Aviv, as well as a new center in Herzliya. Three more centers are slated to open later in Jerusalem, Be’er Sheva, and an undetermined fifth site. Over the next four years, the company plans to double their number of employees from 2,000 to around 4,500.

Russia and Turkey plan to cooperate in the production of various military assets, including submarines, nuclear reactors, jet engines, and more.

13 people were killed after tropical cyclone Shaheen slammed into parts of Oman and Iran causing landslides and flooding Muscat.

The Saudi Arabian foreign minister announced the start of negotiations to end the conflict in Yemen.

Egyptian President Abdel Fattah al-Sisi has decided to impose a closure for security reasons in all or part of the Sinai Peninsula.

There is growing evidence that Turkey’s President Recep Tayyip Erdogan may be too sick to keep leading the country for much longer.

Turkey has closed four border crossings with Iran due to the “corona virus”, although the timing is interesting considering what is happening between Iran and Azerbaijan.

In Hamas-run Gaza, the last Arab Christians are finding it increasingly difficult to hang on.

An Iranian attempt was thwarted to assassinate Israeli businessmen in Cyprus in retaliation for Israel’s effective damaging of their nuclear program and other military operations.

Elections in Iraq are approaching and the main topic of discussion amongst the senior leaders of Iranian-supported Iraqi Shiite militias is how the liberation of Jerusalem will come from their efforts and their country.