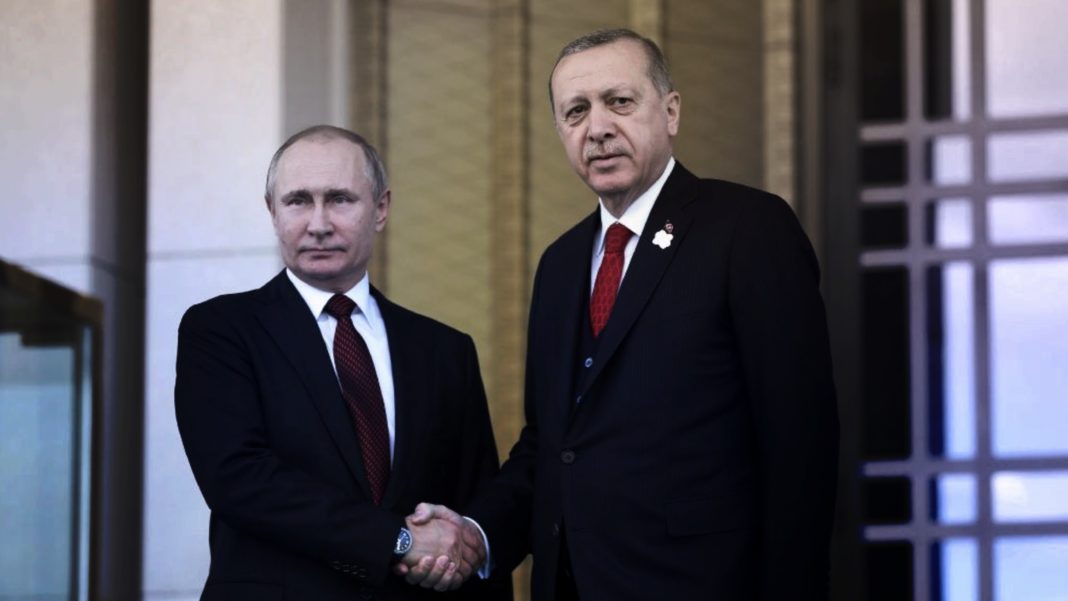 After a recent meeting between Russian President Vladimir Putin & Turkish President Recep Tayyip Erdoğan, Moscow and Ankara are now opening up negotiations for Turkey to receive Russia’s Su-35 and Su-57 jets. The Su-35 is Russia’s proprietary warplane while the Su-57 is their most advanced and versatile.

Additionally, to be involved in this military deal is the possibility of components for electronic warfare. Negotiations are said to be far from final at this point according to the head of the Federal Service for Military-Technical Cooperation, Dmitry Shugayev, who said, “We’ll continue discussing the topics on our agenda. We will move forward with the possible deliveries of the Su-35 or Su-57s (jets), as great interest had been shown, but it’s too early to talk about contract negotiations. If there is still no request from Turkey, consultations should be held,”. While they may not be finalizing negotiations as of yet, both leaders were of the same mind regarding Turkey receiving these jets.

Gomer, Magog, and the house of Togarmah

While the prophet Ezekiel referred to each of these nations by their ancient names, world history shows us exactly who he was speaking to. As Persia is Iran, so Gomer is Turkey, Togarmah is eastern Turkey, and Magog is none other than modern-day Russia. We are able to track down these historic facts by looking into where each tribe had settled during the lifetime of Ezekiel. In Ezekiel 38:15, the prophet said that Gog would come out of the “far north” respective to where Ezekiel was from, Israel. Russia would be that location in the far north or uttermost parts.

In the last 5 years, there has been a convergence of these nations like we’ve never seen before. Israel is back in their land while Iran, Russia, and Turkey are constantly collaborating. All three are now inside of Syria. In short, this military deal that is in the works is only another stepping stone to what the LORD spoke through Ezekiel 2500 years ago. It’s our responsibility to examine what God has said in his Word and discern the times. None of this is coincidental.

Ezekiel 38:1-9 KJV – “And the word of the Lord came unto me, saying, Son of man, set thy face against Gog, the land of Magog, the chief prince of Meshech and Tubal, and prophesy against him, And say, Thus saith the Lord God; Behold, I am against thee, O Gog, the chief prince of Meshech and Tubal: And I will turn thee back, and put hooks into thy jaws, and I will bring thee forth, and all thine army, horses and horsemen, all of them clothed with all sorts of armour, even a great company with bucklers and shields, all of them handling swords: Persia, Ethiopia, and Libya with them; all of them with shield and helmet: Gomer, and all his bands; the house of Togarmah of the north quarters, and all his bands: and many people with thee. Be thou prepared, and prepare for thyself, thou, and all thy company that are assembled unto thee, and be thou a guard unto them. After many days thou shalt be visited: in the latter years thou shalt come into the land that is brought back from the sword, and is gathered out of many people, against the mountains of Israel, which have been always waste: but it is brought forth out of the nations, and they shall dwell safely all of them. Thou shalt ascend and come like a storm, thou shalt be like a cloud to cover the land, thou, and all thy bands, and many people with thee.”