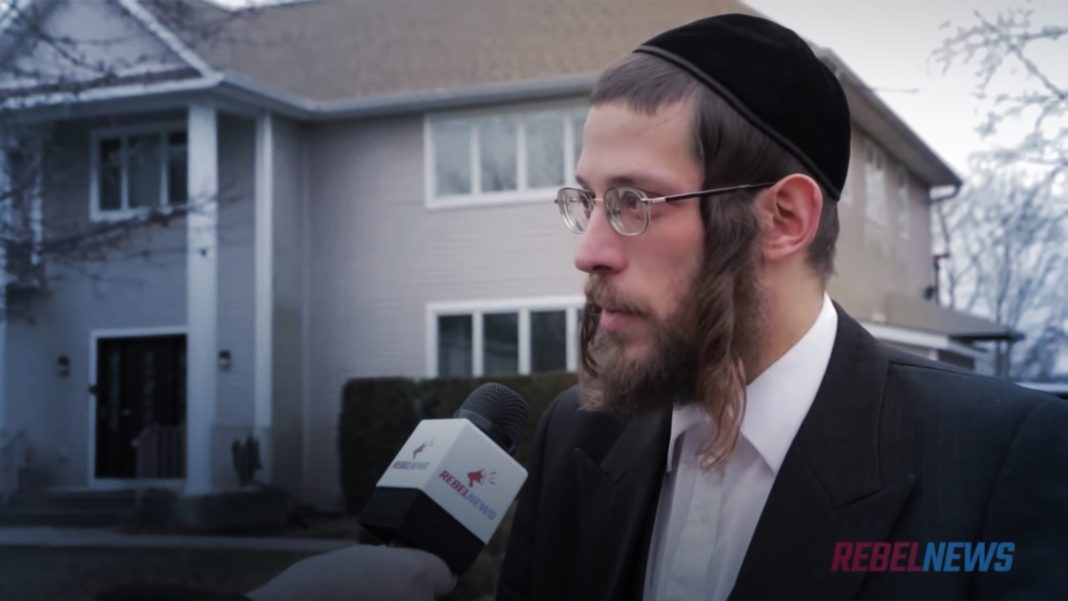 Rebel News’ David Menzies, recently did an interview with Joseph Gluck, who was at the scene where a horrific machete attack took place during a Hanukkah celebration last month. Mr. Gluck’s actions during the event saved the lives of many others, which he credits solely to God, and asks that everyone pray for God’s hand to be on the Jews, to protect them from future Anti-Semitic Attacks.

Isaiah 41:10-11 KJV – “Fear thou not; for I am with thee: be not dismayed; for I am thy God: I will strengthen thee; yea, I will help thee; yea, I will uphold thee with the right hand of my righteousness. Behold, all they that were incensed against thee shall be ashamed and confounded…”

Watch the interview below:

David Menzies: David Menzies for rebel news here in Monsey New York. I’m with Mr. Joseph Glock. He was here in Rabbi Rottenberg house last month when a man with a machete attempted, presumably, a massacre of the occupants inside this house. Many people Mr. Glock are labelling you a hero. Can you take us back to the events of that night in December in terms of what happened?

Joesph Gluck: To start at, Saturday night there was a Hanukkah candle-lighting ceremony in the rabbi’s house. The rabbi just finished the ceremony. The Rabbi went into the private room. The plan was two minutes later to go into the synagogue for a meal next door. I was sitting there still in the room.

A guy came in with a big knife (now I know it was a machete, it looked much bigger than a machete even) and he started hitting people right and left. I ran out through a side door to the kitchen that goes out to the back porch. I tried to grab a few people around me. I picked up a small child, we ran out, everybody ran out through the back porch.

I ran around the building back to the front door. I walked in and tried to save some more lives. I tried to save whoever wasn’t able to go out the first time from the back. I should try to be able to grab them out from the front. I saw the guy was still in was in the kitchen. So, I asked Mr. Neumann the older guy who was critically injured, I begged him to come out. He said, I can’t, I’m injured, call an ambulance, call Hatzalah (that’s the local Jewish ambulance volunteers). He said, I can’t, I’m sorry, I’m bleeding call an ambulance. I said, at least go under the table. he said I can’t.

The guy started coming back from the kitchen with his knife towards me, I ran out the front door. I thought, he’s gonna come after me, so he’s gonna leave the old guy alone. He, unfortunately, he went back to him and hit him again. I ran back through the door, I grabbed a marble-top coffee table that was lying on the floor, and smashed it in his face.

That’s when he started to come after me. I held the door open, he should come out of the house, then he started walking towards the synagogue. He walked past the synagogue, he saw the doors and saw that it was closed. He walked down to his car down the next road, I found him, took his plate number and reported it to the police.

David Menzies: You know it’s a fascinating story. The assailant had a machete or as you described it a very large knife, you had basically furniture and you were putting up a fight. I mean I think a lot of people in a situation like that would have run away, just to save their own skin. Your out weaponized to say the least. What made you stand your ground and fight?

Joesph Gluck: God made me do it. I don’t have a clue why I did it. If you would have asked me a few minutes before if something like this is gonna happen, what are you gonna do? I would say, run for my life! I would have not dared go fight with a machete, a knife, that could reach me and if he throws it at me, I didn’t know what other weapons he might have him on him. I had an adrenaline rush. I was not afraid. I don’t know why I was not afraid. I just had to go in to save people.

David Menzies: I would say you’re right, you’re probably operating on pure adrenaline. I would suggest after you said he was hitting people left and right, that without your intervention we would likely be reporting on a massacre here.

Joesph Gluck: I came back after the police, gave the plate number to the police. I walked around here, I was running to the synagogue, a few to 200 people were in the synagogue. I was looking, only five ambulances went away. Where are all the other injured people? I was sure there were at least a dozen other injured guys. I was afraid there, God forbid they’re gonna build a chapel here. I was sure of the catastrophe is much bigger than it was.

David Glick: Well thank goodness that it wasn’t! You did mention Mr. Neumann’s name, I understand he’s still in hospital and the prognosis doesn’t look so good right now, does it?

Joesph Glick: Not at all, he is still in a coma, I visited him on Thursday. I was by his bedside. It didn’t look good.

David Menzies: If I can ask you mr. Glock moving forward for people like you, people in the Jewish communities in New York and New Jersey, what do you think they should be doing in the here and now to protect themselves, to make sure they don’t join that victims list?

For example, I would have thought that a public place is a dangerous place, a private home, nobody would have thought that you need protection in a private home. Why should everybody have an armed guard in front of his house? It’s not gonna work either way. So we’re anyhow in God’s hands. You have to pray that He should keep his the right hand upon us and protect us.