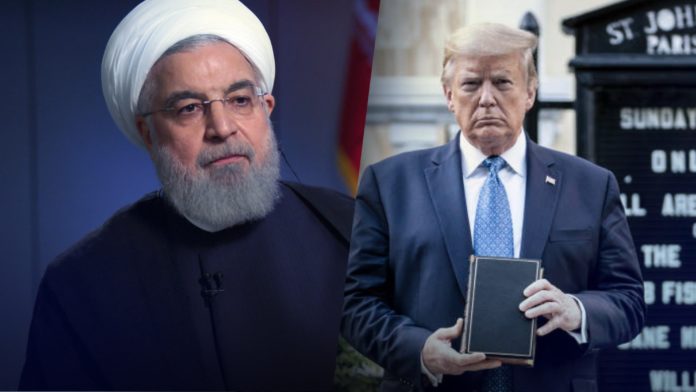 Iranian President Hassan Rouhani, who helps preside over a regime that funds jihadist groups like Hezbollah and routinely threatens the destruction of Israel, attempted to lecture President Donald Trump on Thursday about bringing a Bible to St. John’s Church in Washington, DC.

Trump visited the church on Monday after radical leftists set it on fire over the weekend, part of a nationwide wave of violence triggered by the killing of George Floyd at the hands of Minneapolis, Minnesota, police. The officers filmed killing him now face charges of murder. Floyd is the latest on a growing list of black Americans killed by police while unarmed and apparently presenting no threat.

Rouhani objected in his remarks to Trump holding up a Bible in front of the church, calling it “shameful.” Despite the context of a leader in the Islamic Republic of Iran condemning the public display of a Bible, he did not demand Trump display a Quran. Instead, Rouhani claimed that he understood the Bible better than Trump and that Trump had used the Bible to justify “murder.”

“The Bible is a holy book that invites people to peace and compassion. It is shameful that the U.S. president reaches for The Bible [to justify] issuing an order for murders and crimes against American citizens,” Rouhani said, according to Iran’s state-run PressTV media outlet. “The rulers in the White House have turned the current situation into one of the worst eras in America’s history.”

“It is a shame that the US president holds a Bible when he plans to act against American citizens,” Rouhani reportedly added.

Tasnim News Agency, another radical Islamic outlet in Iran, quoted Rouhani as declaring that Iranians “express sympathy toward the American people who are on the streets and condemn the White House for ordering the crime (against people of color).”

“We are witnessing major oppression against African Americans,” he added.

The Islamic Republic of Iran is a U.S.-designated state sponsor of terrorism, investing heavily in jihadist groups that oppress Christians and Jews, most prominently Hezbollah. Rouhani himself, often branded a “moderate” by leftist media, has repeatedly applauded moves towards the physical destruction of the state of Israel, calling jihad by radical Muslims the only option.

Rouhani’s government – in actuality run by Supreme Leader Ayatollah Khamenei, but with Rouhani’s help during his tenure – has spent much of its efforts attempting to use money generated by the Iranian nuclear deal of 2015, formally the Joint Comprehensive Plan of Action (JCPOA), to fuel jihadist violence throughout the Middle East. With help from Hezbollah and the Popular Mobilization Units (PMU/PMF), an Iraqi jihadist coalition, Tehran has bolstered Shiite governments in Iraq and Syria, particularly dedicating itself to keeping Syrian dictator Bashar al-Assad in power. Iran has developed military assets in both countries, used Afghan refugees as cannon fodder throughout the Syrian Civil War, and persecuted Christian populations in both countries at the height of the Islamic State’s Sunni terrorist wave in the region. Following the demise of ISIS in Iraq, Christians reported that Iran-backed PMF terrorists began stealing property belonging to them, rendering them homeless and at high risk for death by jihadist attack, starvation, lack of water, or all of the above.

“Iranian-backed militias are occupying many of the formerly Christian towns and making it virtually impossible for Christians to come back in. What ISIS failed to accomplish, that is to have a religious cleansing of Christians in the area, Iran, through their surrogates, may accomplish still,” Carl Anderson, the CEO of the pro-Christian Knights of Columbus, said in April 2019 of Iraq following a trip to the Nineveh plains, the homeland of Iraq’s Christian minority.

Many Middle Eastern Christian groups, following the fall of the ISIS “caliphate” in Iraq and Syria, asserted their people did not want to return to previously ISIS-controlled areas because they did not believe that ISIS was the only threat to their existence there and that they had “no hope” persecution would end.

Within Iran, Christians have little ability to practice their faith without rigorous persecution from the Islamic regime.

“Christians are forbidden from sharing their faith with non-Christians in Iran, and it is illegal to produce Christian literature or hold church services in Farsi, the most common language in Iran,” the Christian aid charity Open Doors detailed on its World Watch List, where Iran ranks the ninth most dangerous country in the world to be a Christian. “Converts from Islam face persecution from the government. If Christians attend an underground house church, they face the constant threat of arrest.”

The group documented 169 arrests of Christians throughout the year in anticipation of the publication of its 2020 World Watch List.