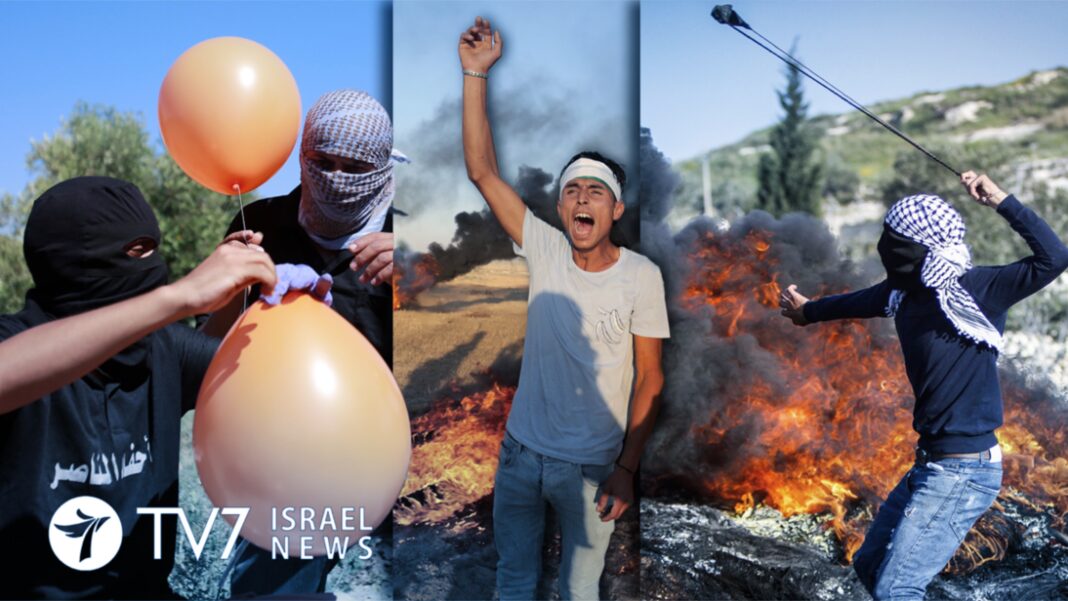 46 separate blazes have decimated southern Israeli agricultural fields and forests over 3 consecutive days of Palestinian airborne arson attacks from Gaza – which include 8 major fires over the past 24 hours, and 26 firebomb attacks in a single day.

The IDF launched overnight retaliatory airstrikes on military infrastructure belonging to the enclave’s Islamist Hamas rulers, for the 2nd time in 3 days.

“Fighter jets attacked Hamas military complexes that served as camps and meeting places for terrorist operatives in the Khan Yunis and Gaza Brigades. Terrorist activity was clearly seen in the attacked compounds,” said the IDF in a statement.

“The attack was carried out in response to the launching of incendiary balloons into Israeli territory. The IDF is prepared for every scenario, including the resumption of hostilities, in the face of continued terrorist operations from the Gaza Strip,” stressed the Israeli military.

Other media outlets reported strikes on Hamas operations in the town of Beit Lahia. According to Palestinian sources, Hamas military wing outposts in the northern and southern Gaza Strip were hit, including one that was attacked 3 times.

For the first time since a fragile ceasefire ended the Operation Guardian of the Walls fighting between the sides last month, air raid sirens were sounded in the southern Sha’ar HaNegev Regional Council. The IDF later announced that the alarms were triggered by false identification of heavy machine-gun fire in Gaza targeting an Israeli drone. There were no reported injuries or damage.

Israel conveyed a message to Hamas yesterday that there would be a military response if the launching of incendiary balloons from Gaza was not immediately ceased. An Israeli National Security Council delegation currently in Cairo issued that warning through the Egyptian intelligence service. The Israelis are in Egypt – which helped negotiate an end to the deadly May conflict – to work toward reaching a long-term truce with Hamas.

This week’s escalation marks the most significant violence since a fragile ceasefire ended 11 days of deadly fighting between the two sides last month. It also presented the first, early test for the government of new Prime Minister Naftali Bennett, whose coalition came to power on Sunday on a pledge to focus on socioeconomic issues and avoid sensitive policy choices towards the Palestinians.

Bennett in the past demanded that Israel respond with extreme force to Palestinian fire attacks. “The south is on fire… and the government’s policy of not eliminating terrorists who launch explosive balloons is life-threatening and detrimental to deterrence,” he said in June 2019, insisting “If explosive balloons were flying over houses in Tel Aviv or a missile was fired at it, the IDF would stop it” in March of the same year.

“Going forward the basic equation must change. We will not accept any breaches of our sovereignty,” stressed Israeli Defense Minister Benny Gantz after the conclusion of Operation Guardian of the Walls in May, underscoring that “We cannot return to the previous reality, and this campaign was designed to change it.”

Following a situation assessment ahead of last night’s air strikes, IDF Chief of Staff Lt. Gen. Aviv Kochavi issued orders to step-up preparation for a wide range of scenarios, including the resumption of robust counterterror operations in the Hamas-controlled territory.

Gen. Kochavi is scheduled to travel to Washington on Sunday for a talks with top officials of the United States Armed Forces and Department of Defense, including a long-anticipated meeting with his US counterpart, Four-Star General Mark Milley. The meeting agendas will focus on a wide variety of issues related to regional security and stability, topped by threats posed by the Islamic Republic of Iran.

Senior Israeli military officials have stressed that despite its critical nature, Kochavi will not hesitate to postpone the US visit if the situation with Gaza deteriorates. The sources also underscored, that in accordance with new IDF policy in the wake of last month’s conflict as well as a change of leadership in Jerusalem, incendiary attacks will draw the same response as rockets.

Speaking to the Hamas-run Al-Aqsa television channel, one of the Islamist group’s officials reacted with fury and proclaimed that any attempt by Israel to implement such a new strategy will be confronted.

In other violence, Muslim worshippers clashed with Israel security forces on Jerusalem’s Temple Mount this afternoon, when several began hurling rocks at the officers following Friday prayers at the al Aqsa Mosque. Palestinian sources said that 3 of the rioters were injured.

8 Arab men were arrested for disorderly conduct at the nearby Damascus Gate into Jerusalem’s Old City last night, during a demonstration against the holding of a controversial Israeli Flag March last Tuesday.

In a separate incident on the West Bank, a Palestinian who threw explosives at Israeli troops was shot and killed yesterday, during a protest against a new settlement outpost. The Palestinian Health Ministry identified the suspect as Ahmad Shamsa, 15, saying that he was the 4th demonstrator to be killed since the outpost was established last month.

Israel Carries Out Second Series of Strikes in Syria this Week