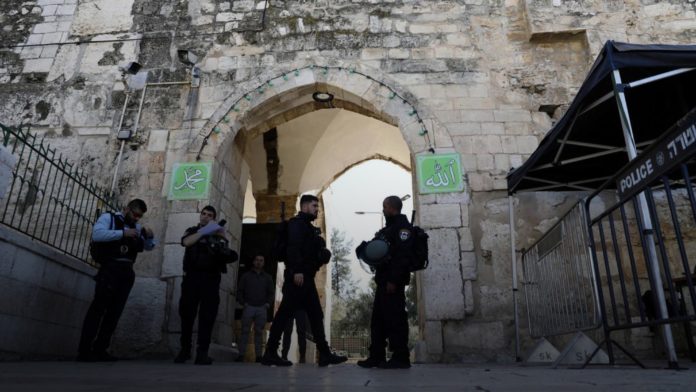 The IDF beefed up troops in the West Bank after a spate of terrorist attacks on Thursday, including a drive-by shooting near the settlement of Dolev that injured an Israeli soldier. It was the third attack against IDF troops in less than 12 hours.

The soldier was lightly injured in the shooting attack against a military post before the assailant fled the scene.Earlier on Thursday, a border police officer was lightly wounded in an attack on the Temple Mount in Jerusalem’s Old City just hours after 12 Israeli soldiers were wounded, including one critically, in a suspected vehicular ramming attack in central Jerusalem.

According to police, the man from northern Israel opened fire with a 9mm pistol at officers from outside the Temple Mount area, lightly injuring one of them. Unconfirmed Hebrew media reports said the man, from the Haifa area, had recently converted to Islam.

The terrorist was shot dead by other officers at the scene. The 38-year-old wounded officer was evacuated to Shaare Zadek Medical Center with bullet wounds to his hand.

“When we arrived at the scene we saw the wounded [officer] walking around, suffering from a wound in his hand. We treated his wounds and transferred him to the hospital,” MDA Paramedic Israel Weingarten said.

Hours earlier, a group of Golani soldiers was struck by a car at high speed near the First Station, a popular entertainment spot on the city’s David Remez Street. The group was on a heritage tour ahead of their swearing in ceremony at the Western Wall when the attack happened.

IDF Spokesperson Brig.-Gen. Hildai Zilberman said that they had been walking on the sidewalk when the vehicle came from behind and struck them. The soldiers were not able to shoot at the driver before he fled the scene of the attack.