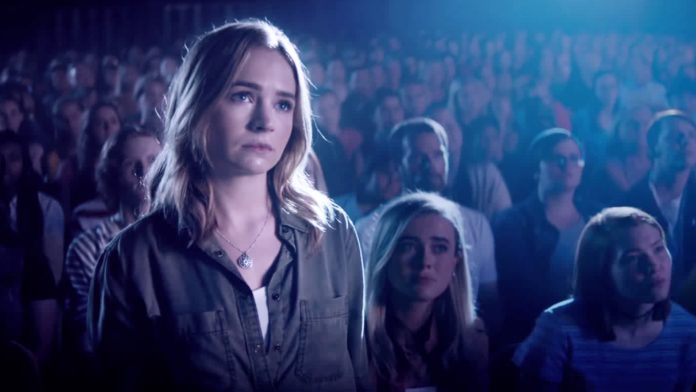 Many in Hollywood routinely mock religion and poke fun at worshippers. But an upcoming Christian film, I Still Believe, is challenging that trend by winning over the media – even before its release.

The film, directed by Andrew and Jon Erwin and distributed by Lionsgate, is based on the love story of award-winning Christian singer Jeremy Camp and his first wife, Melissa. Its star-studded cast includes KJ Apa, Britt Robertson, Shania Twain, and Gary Sinise. Although the movie doesn’t hit theaters until March 13, the YouTube trailer already boasts more than 8.5 million views. It’s also making headlines as the first faith-based film to be shown in IMAX.

With its accomplishments, the film captured the attention of the media, including Forbes senior contributor Scott Mendelson.

“Even in a time when more movies get the ‘IMAX Experience,’ I Still Believe qualifies as a special case,” he wrote February 11.

“Earlier we had some tough news,” his character tells a packed auditorium from the stage, as he strums on his guitar. “Can we do something special for the most special person in my life tonight? Can we pray for her?”

That “tough news” is likely Melissa’s ovarian cancer, which she suffered from in real life.

When Camp’s parents, played by Shania Twain, and Gary Sinise, question his decision to marry Melissa at a young age – and with her cancer diagnosis – Apa’s character urges, “I’m supposed to be with her. I can’t explain it, I just know that.”

He later declares an unconditional love for his bride.

“I want you to know that whatever this is, and wherever it takes us, that I’m with you every step, every moment, I’m with you,” he says in the trailer. “I’m in.”

To him, she’s not the victim, but “the strong one.”

With their love story, co-director Andrew Erwin told Christian Headlines that he hoped to reach a broad audience.

“We’re trying to give the church a tool that they can use to reach their community,” he said in a piece published February 19. “So it’s definitely still engaging the church – but for a different purpose. It’s to reach out beyond the church walls.”

And they’re accomplishing just that. Everyone from women’s magazines to entertainment news sites are already hyping the film.

In December, Seventeen fellow Jasmine Gomez listed I Still Believe first in her “7 Most Romantic Movies Premiering in 2020” piece.

Last month, Vanessa Jackson wrote for E! News that “It’s clear from this trailer that both KJ and Britt have an undeniable chemistry that is sure to make this film a classic romantic film for years to come. It’s a love story for the ages.”

And when the trailer first came out in August, MTV associate editor Jordyn Tilchen predicted that the film “will probably have whole theaters of people in tears.”

“From the looks of the teary trailer, tissues will need to be on hand when the film hits theaters,” agreed Entertainment Weekly correspondent Ruth Kinane.

Bustle writer Jake Viswanath added that the trailer “looks like a musical take on The Notebook, and it’ll have your eyes watering before you even step into the theater.”

While the story centers on Jeremy Camp, the actor who plays him, KJ Apa, has played a role in drawing attention to the film with his millions of fans.

According to the 22-year-old New Zealander, who identifies as a Christian, the movie is about “journeying through your biggest fear and coming out on the other side and still loving God,” the Christian Post reported in November.

Apa rose to fame after starring as Achie Andrews in The CW’s Riverdale series. At the time, he spoke with Elle magazine about how he handled the new attention.

“I’m a Christian, so my relationship with my spiritual side and relationship with God is everything to me. And my family,” he said in 2017. “I guess being on the show does change things a little bit. But I don’t really think it changes you, your character, unless you allow it to.”

“I hope people, after seeing the love between Jeremy and Melissa, think, ‘I hope that I could one day be in love like that,’” Apa added, according to the Christian Post.

It’s a love that, in many ways, appears to be rooted in another, bigger love story – one of God’s divine providence.