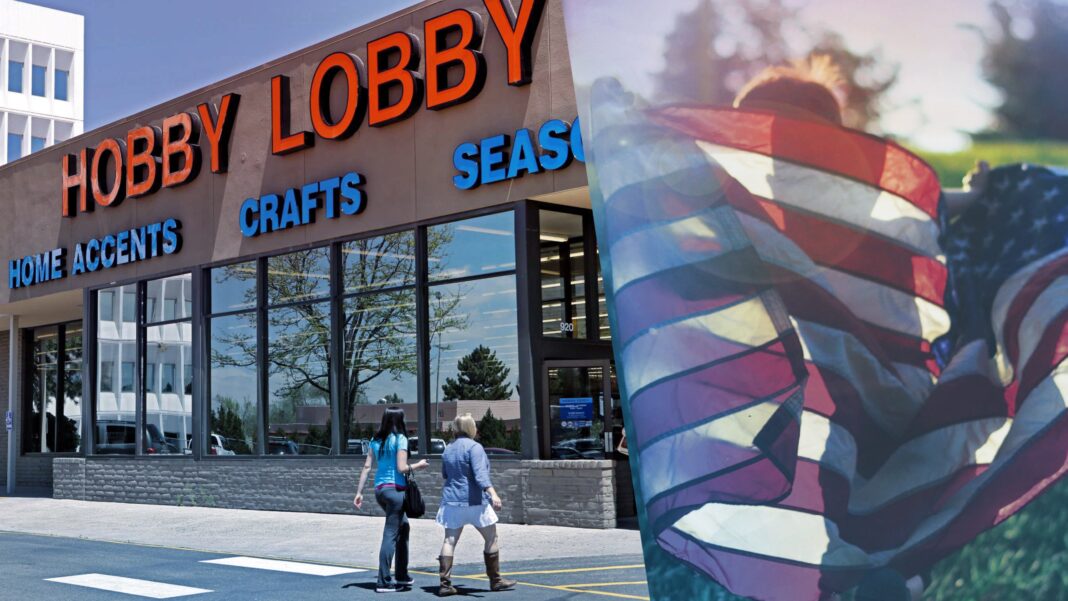 Hobby Lobby drew applause and criticism on the Fourth of July for a holiday-themed newspaper advertisement that cited a Bible verse and said the United States was “One Nation Under God.”

The full-page advertisement ran in newspapers nationwide but also was available on the company’s website. Hobby Lobby, which was founded by a Christian family, has run holiday-themed ads since 1996 and Independence Day ads since 2006.

The 2021 ad showed an American flag alongside the phrase “One Nation Under God” and a verse from Psalm 33:12, “Blessed is the nation whose God is the Lord.”

The bottom of the bad included 20 quotes from Founding Fathers, Congress, the U.S. Supreme Court and others on the subject of religion.

A quote from George Washington read, “It is the duty of all nations to acknowledge the providence of Almighty God, to obey His will, to be grateful for His benefits, and humbly to implore His protection and favor.”

A quote from John Adams read, “Our Constitution was made only for a moral and religious people. It is wholly inadequate to the government of any other.”

Hobby Lobby has run a similar advertisement in the past. In fact, the 2020 ad included the same quotes and the same Bible verse.

Still, this year’s ad sparked a back-and-forth among supporters and critics on social media. “Hobby Lobby” trended in the Top 5 on Twitter for much of Independence Day.

“As an American Jew who served in the United States Army and took an oath to defend the Constitution; I find your statement of America should be lead by Christians to be asinine and unconstitutional,” one person tweeted. “Shame on you”

But the Hobby Lobby ad had plenty of supporters. The company also posted the ad on its social media accounts.

“Thank you Hobby Lobby for the encouraging WORD that you have tweeted,” one person wrote. “May the Lord bless you and all your employees and their families and cause you to prosper and continue to be a bright light in this dark community.”

Hobby Lobby founder David Green came up with the idea for the ads during the 1995 Christmas season.

“Green was reading the Christmas advertisements, including those for his own store, and he felt commissioned by God to do something different,” Hobby Lobby’s website says. “Hobby Lobby was selling all kinds of crafts that customers used to celebrate Christmas, yet David Green was struck by the lack of any testimony in newspapers regarding the meaning of the holiday.

“… Before long, Hobby Lobby was placing beautiful full-page ads celebrating the real meaning of Christmas, Easter and Independence Day in newspapers across the country. The impact and relevancy of these messages is ongoing, so we post them here for your enjoyment.”

Outraging The Enemies Of God

Franklin Graham responded to the backlash received by Hobby Looby for their Christian message, stating:

Hobby Lobby is being attacked for running some beautiful full-page newspaper ads on July 4. The ad was titled “One Nation Under God” and included the Bible verse, “Blessed is the nation whose God is the Lord” (Psalm 33:12). These positive advertisements have outraged enemies of God’s Word such as the Freedom from Religion Foundation. I hope this exposure for their ads, even though it was intended for harm, will actually allow even more people to read the message and appreciate what Hobby Lobby’s owners, the Green family stand for. I thank God for the Green family, their Christian-run business, and their strong public stand for the Word of God and biblical values.

Unsurprisingly, Hobby Lobby came the most prominently under fire by secularists groups for its July 4th newspaper advertisements.

The Freedom From Religion Foundation, published a news release titled, “This July Fourth, celebrate secularism and boycott Hobby Lobby,” in which they slam the craft store for its Christian beliefs, and for the 8th consecutive year call for atheists across America to boycott the company.

Alongside an advertisement that reads “celebrate our godless constitution,” FFRF writes:

The Freedom From Religion Foundation is drawing attention to the harm of theocratic propaganda put out every July Fourth by Hobby Lobby, a for-profit corporation that is assiduously working to undermine America’s secular heritage and impose a Christian nationalist agenda. [emphasis added]

Others took to Twitter claiming that the Hobby Lobby ad advocated for a “Christian only” government. However, the company’s ad simply consisted of:

Secularists may try to twist the message, but their anger is not due to a Hobby Lobby Christian coup conspiracy, their rage is actually fueled by a hatred of God.

Many have pointed out that although the secular left continuously states that they are the group that stands wholeheartedly for tolerance, it is abundantly clear that they only “tolerate” the views and values that align with themselves.

The godless will not “tolerate” the true and living God being acknowledged. The very mention of Jesus is an offense to those who reject Him.

The Bible provides us keen insight into the mind behind this thinking.

1 Peter 2:7-8 states that to those who believe, Jesus is precious, but to the disobedient to God, Christ is a “stone of stumbling and a rock of offense.”

2 Timothy 3:1-13 states that in the last days, perilous times would come and that all that live “godly in Christ shall suffer persecution.” In other words, people would despise all those who live according to the truth and morality standards laid out in God’s Word. The same chapter explains that man in the last days will be corrupt, despise the truth, and be “reprobate concerning the faith.”

In the future, the Bible outlines that a man will come onto the scene, the antichrist, who will establish a world government that is in opposition to God and Christianity.

America and what it stands for (or what it stood for when it was founded) runs in direct opposition to this coming world order. America was founded on Biblical Judeo-Christian values, and it promised freedoms to its citizens. This means that those setting the stage from the approaching antichrist system, knowingly or unknowingly, must remove God, take away basic freedoms, and corrupt the country’s democracy.

It has become trendy to believe America’s founding was evil and that it needs to be torn down and rebuilt (or built back better) upon a Marxist foundation.

David Fiorazo, earlier this year, stated that: “Socialists and globalists have already convinced people that Christianity is intolerant and patriotism is divisive. But we must not allow the left to turn our love for God and respect for our country into something shameful, wrong, or dangerous.”