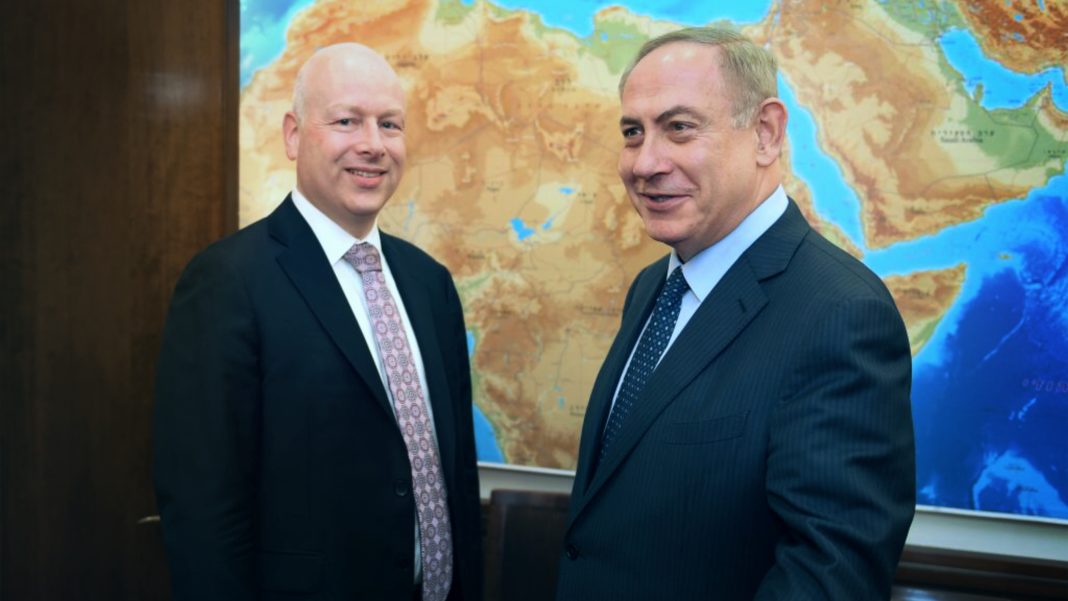 Arutz Sheva spoke with outgoing White House Mideast Envoy Jason Greenblatt, who discussed the US peace plan and summed up his work.

What can you tell us at this stage about the peace plan, when will it be released?

There isn’t much that our team will reveal about our vision for peace until it’s officially released – which we have always said will be when the time is right. Most people who understand the complexity of the conflict know that only a realistic solution has a chance at ending it. It’s our hope that our vision can advance the cause of peace and bring people together to start a productive, realistic discussion – even if it’s not embraced immediately. But it’s important to remember that nobody can force this vision upon anyone. When the plan is released, it will be up to both sides to decide how to proceed. When the vision is released, we hope that both parties will read it carefully and not make any hasty decisions. We fully expect criticism from all sides. No one can put forth a plan that everyone will embrace. But we believe our plan is a realistic and implementable plan, one which can significantly improve the lives of millions of people.

What is your message to Israelis who fear that the plan will include demands for Israeli land concessions, especially after seeing a map presented during the elections by the Yamina candidates?

I don’t know where Yamina got that map. I had never seen that map. I think they may have acknowledged that they developed the map themselves based on how they understood the various messages being sent about the plan. As I said in my July 23 remarks to the UN Security Council, many participants in this conflict’s conversation continue to re-litigate the events of 1967, when Israel heroically acted to defend itself against a threat of its very existence. Both Israel and the Palestinians have asserted a claim to certain land. The dispute over the territory is a question that can only be resolved in the context of direct negotiations between the parties, not by throwing around the traditional phrases about this conflict that has led to nothing. Those who have weaponized the term “occupation” in order to criticize Israel are doing nothing to promote a resolution to this conflict. In fact, they are heavily undermining the chances for peace and the improvement of the lives of Palestinians and Israelis. I prefer the term “neighborhoods and cities” to describe what others call “settlements”. Use of the term “settlements” is purely political and ignores the reality of what they actually are.

Do you believe the Palestinians will cooperate, they seem to be strongly against any US step as we saw regarding the Bahrain conference?

Our hope is that the Palestinian people will recognize what we have tried to create for them in this vision, and the many significant benefits in store for them under this vision. We want to provide them with the opportunity to thrive. The Peace to Prosperity vision we released in Bahrain was designed to outline the investments necessary to lay the foundation for sustainable economic growth if a comprehensive peace agreement is achieved. It is not a bribe to get the Palestinians to surrender their political aspirations. Rather, it is a vision of what we might be able to achieve together in the event of a peace agreement. Yet instead of embracing this opportunity, the Palestinian leadership boycotted the Bahrain workshop and even went so far as to arrest its own people for attending. We had hoped that the Palestinian leadership would have done the responsible thing – attend the workshop, and raise legitimate concerns about the economic vision. Instead they chose to boycott the workshop. How does that help the Palestinians? And yet, they showed up in full force for the AHLC donor conference on the margins of the UN General Assembly a few weeks ago. When it comes to discussing aid, as opposed to investment in their people – that they are prepared to discuss at length. But relying on perpetual donor aid is not a way to build a future. At some point donor countries will tire of this endless cycle of aid. I hope the Palestinian leadership is taking this into account.

How do you sum up your work as envoy and what have you learned about the situation on the field more than you knew as you began your work?

I’ve been fortunate to have had countless candid conversations with Israelis, Palestinians, and regional leaders. After the announcement that I would be stepping down, I received numerous touching messages from Palestinians who I met multiple times over the last two and a half years. They thanked me for all we have done to try to improve their lives and our attempts to bring peace. They may disagree with some (or, in some cases, all) of our policies, but they have expressed deep gratitude to us for trying. This is what allows me to believe that there’s hope that our vision will succeed. If it doesn’t, I hope that in the coming years, in the lifetime of my children, we can finally get this done.

Why did you decide to leave?

My family and I deliberated this decision for a long time as I originally intended to take serve at the White House for about two years. However, with me in Washington and my family several states away, it’s very hard to be separated all week. At some point I knew I needed to start transitioning out, and so I’m transitioning out. It has not been an abrupt departure. Among my primary responsibilities was to study the conflict, come up with a vision together with my co-workers, educate people about the conflict, and be out there changing the conversation about the conflict, which has been an enormous priority for us. We have now studied the conflict and have completed our vision for peace. We have also worked on and seen significant results connecting Israel with its neighbors. Much more needs to be done, but a lot of progress has been made on that front, thanks to the leadership of President Trump, Prime Minister Netanyahu and several of the leaders in the region. I think this is a good time for me to make the transition.