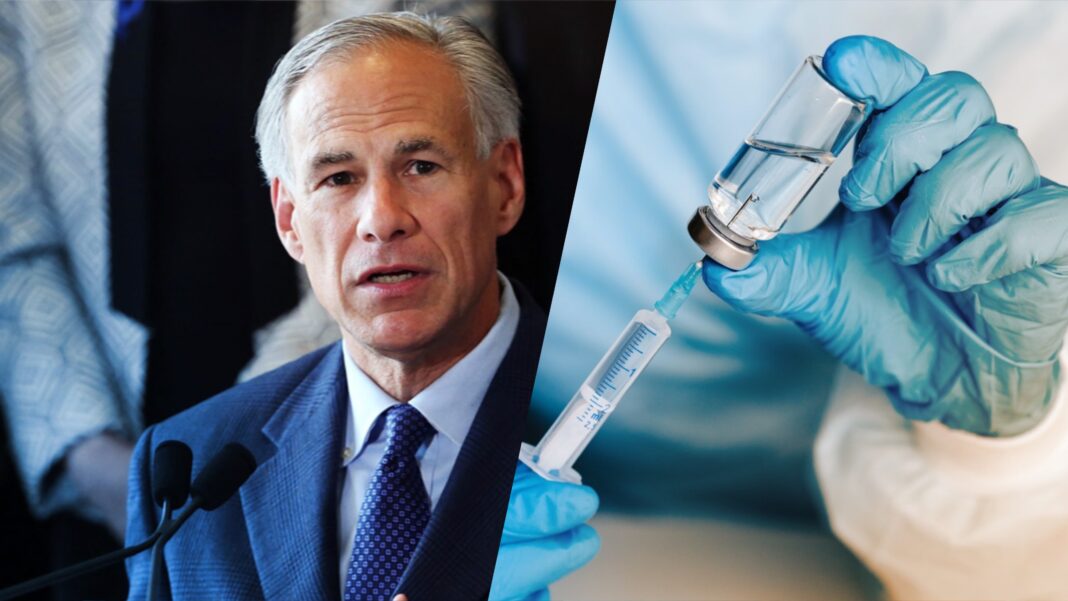 Texas Gov. Greg Abbott (R) signed a measure on Monday banning the use of vaccine passports in the Lone Star State, joining other GOP-led states, such as Alabama and Florida, which have taken similar action.

“Texas is open 100 percent, and we want to make sure that you have the freedom to go where you want without limits,” Abbott said in a video posted Monday.

“The Texas Legislature passed a law that I’m about to sign that prohibits vaccine passports in Texas. No business or government entity can require a person to provide a vaccine passport or any other vaccine information as a condition of receiving any service or entering any place,” he continued, thanking the Texas legislature for getting the measure to his desk.

“Vaccine passports are now prohibited in the Lone Star State,” the Republican governor said after signing the measure, Senate Bill 968, into law:

Entities that violate the law could lose state contracts. Additionally, state agencies “that oversee various sectors of business may decide to make compliance with the state law a condition of getting licensed or permitted,” per the Texas Tribune.

Florida Gov. Ron DeSantis (R) took similar action in May, signing a bill banning the use of vaccine passports in the Sunshine State.

“In Florida, your personal choice regarding vaccinations will be protected and no business or government entity will be able to deny you services based on your decision,” DeSantis said at the time of the bill’s signing.

Last month, Alabama Gov. Kay Ivey (R) signed Senate Bill 267, which stops “state and local governments from issuing vaccine passports to Alabamians” and “also prevents businesses in the state from refusing service to a customer based on their vaccination status.” However, the measure does not prevent employers from requiring employees to get vaccinated.

Other states taking action against vaccine passports, via either executive action or legislation, include Arizona, Indiana, Idaho, Montana, South Carolina, and South Dakota.

Vaccine passports may have been cloaked in the promise of “keeping people safe,” but from the beginning, it has been clear that its purpose has been far more sinister and totalitarian in nature. They are being used to force compliance; to deny freedoms to those who are reluctant or against taking the experimental COVID vaccine.

We applaud those states such as Florida and Texas who have pushed back against such measures and call the vaccine passports what they are: a complete violation of fundamental rights and severe Government overreach.

“The virus itself is very real. But the fear-mongering, progressive push wrecking our country’s economy, and the suffocating of our freedoms should wake us all up,” David Fiorazo recently explained. “The agenda behind it all is pushing us closer to a new world order. It’s a globalist’s dream.”

“But we may have to get used to freedoms with conditions and restrictions. In other words, discrimination and even persecution. And if you don’t blindly follow the crowd; if you disagree or try to simply speak the truth, you will be banned, censored, or canceled,” David Fiorazo further stated. “Keep it all in perspective. This life is a vapor. Take your stand on Christ and then for the truth, even if you feel you’re standing alone. You have no idea who is watching how you respond and whose faith might be strengthened by your example.”

“These tests and trials are temporary,” he continued. “So are the sufferings of this present time, and the Bible says they are not worth comparing with the glory that is to be revealed to us. Jesus is making all things new, and when He returns, what we’re going through will be quickly forgotten and will fade into eternity.”