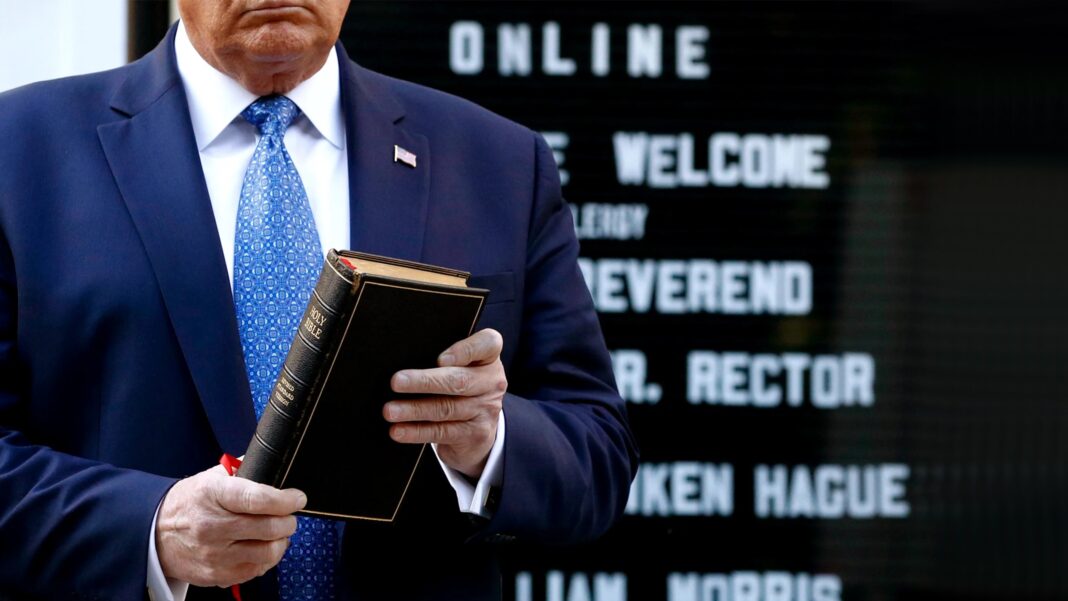 The divide in our nation among Christians seems to be fueled primarily by misinformation and false narratives. I believe that God is allowing these differences so we can practice Scripture and love those we disagree with, but some are taking it too far. Andy Stanley, for example, commented that leaders who align with Trump actually hurt the Church’s ability to reach people outside the Church.

I’m assuming that Andy’s thought process goes something like this: “When you support someone like Trump, you alienate people and turn them off to the gospel.” In order to gain insight into this point of view, I recently spent time with Christians who take this position. Though I left that meeting with a better understanding of how people feel, I was more convinced than ever of the dangers of allowing our feelings to outweigh objective truth. I wondered, “Would these same people use this argument in the late 1800s, suggesting that we shouldn’t support Lincoln because it could hurt our witness to slave owners?” Lincoln was different from President Trump, but the principle still applies: We can’t make decisions based on the fear that something will offend; we must make decisions based on what is right.

A simple study of church history reveals that the pastors often spoke about political hot buttons. In early America, pastors would preach election day sermons. But recently we caved into political correctness because we are more concerned about nickels and noses . . . pleasing men more than God. Political correctness is also why many churches won’t open. It begs the question: Are we watchmen or cowards?

BUT IS NOT OFFENDING OTHERS OUR GOAL?

The view that says supporting the President hurts our witness is flawed in three ways: 1) When people who can support President Trump don’t, they, by default, support the opposing views. You can’t have your cake and eat it too. 2) How can we protect the unborn, bring back God’s Word in many areas of society, and not legalize perversion if we are to remain neutral? We can’t. 3) The view that you can’t support Trump, attempts to scrutinize character rather than policy. Obviously, character is important, but, if a man, who has decent character according to some, is taking America in a very dangerous direction, do we look at his character over his policies? Of course not. Policy speaks louder than character (although ideally, they should match).

The President is hated, not because of his character, but because of what he stands for. He is a disruptive force. As I’ve said many times before: If the abortion industry, George Soros, most of the media, lukewarm churches, ANTIFA, and Hollywood are on your side, are you sure that you’re on the right side?

If we are consistent and take this line of thinking about hurting the gospel to its logical end, does that also mean we shouldn’t speak out against abortion because it may hurt our witness to physicians who perform them? Or what about the parent who had an abortion—should we not mention any pro-life positions because it may offend them? No, it’s okay to speak the truth in love and then offer hope as I did here in “The Day I Told My Daughter about My Abortion Decision.” Offering hope elevates the gospel.

Should I stop talking about the perversion in Hollywood because it might offend an executive on Sunset Boulevard? Of course not. Sharing the good news—the gospel—doesn’t work if we remain silent and capitulate to political correctness. If you’re walking on eggshells and gauging every word carefully so as not to offend, your speech will be spiritually impotent. We have too many cowards and too few Spirit-filled leaders. As Leonard Ravenhill said, “We have too many puppets in our pulpits and not enough prophets.” I couldn’t agree more.

Would many of these Christians tell Jesus not to call the religious leaders whitewashed tombs and vipers because it may hurt His witness to them (Matthew 23:23, 27)? Would they tell Jesus not to say, “A worse thing will come upon you unless you repent,” (John 5:14) because it will turn His hearers off? Would they caution Him against offending His audience when He said, “Don’t fear them who can kill the body; fear Him who can cast both body and soul in hell” (Matthew 10:28)? I think we all know the answer.

In 1 Corinthians 9:22, when Paul said, “I have become all things to all people so that by all possible means I might save some,” he was being culturally relevant, not truth deficient. Our attitude shouldn’t offend others, but truth will. We should be more concerned about God’s opinion than popular opinion. I truly believe that a lack of boldness in the pulpit (and the pew) is the result of not spending sufficient time alone with God while allowing His Word to empower us. Instead of spiritual guns of boldness being loaded in the prayer closet, we are turning into passive cowards who cover our lack of boldness with political spins and worldly excuses.

We must preach the difficult truths to set people free. The church cannot neglect, water down, or avoid preaching hard things because it may offend. Oswald Chambers reminds us that “the words of the Lord hurt and offend until there is nothing left to hurt and offend.” The gospel hurts before it helps; it condemns before it releases. To remove everything that offends is to remove the very foundation of the gospel.

The goal of preaching is to faithfully proclaim the Word of God, and not worry about “crowd appeal.” The church, as a whole, may have forgotten this vital truth, but it doesn’t follow that we should. We need to be “woke” to the things of God and “cancel” cowardliness.