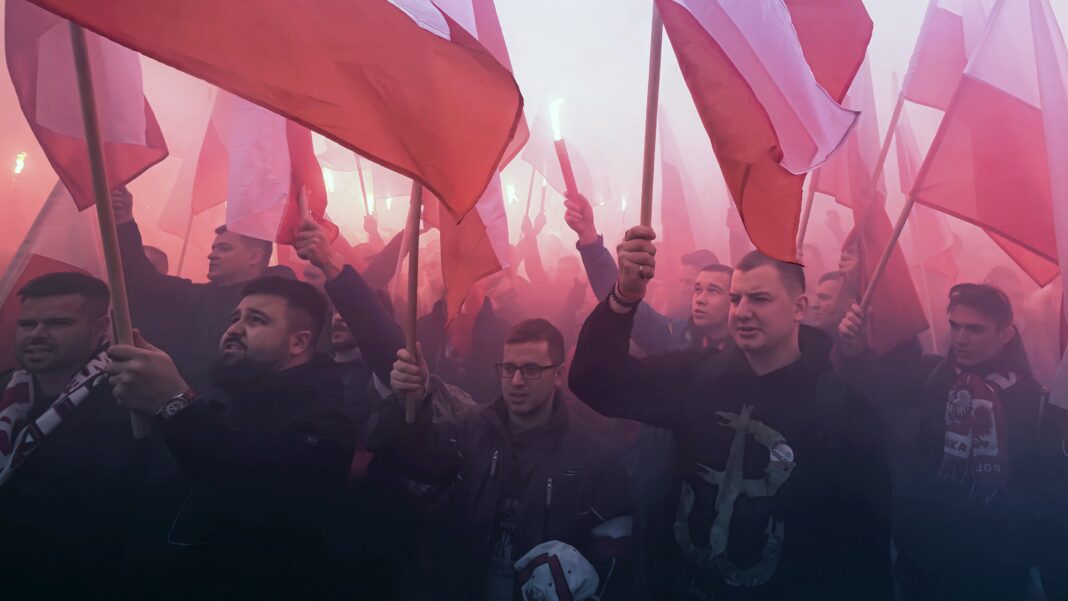 “Death to Jews” was shouted by hundreds of demonstrators at a march in Kalisz to mark Poland’s Independence Day.

Participants at the far-right rally marched to the central square of Poland’s central city of Kalisz on Thursday while chanting for “death to enemies of the fatherland,” according to the local Nasze Miasto news website.

Others shouted “this is Poland not “Polin,” in reference to the Hebrew name for the country; while demanding the expulsion of “Zionists” they branded as state “enemies.”

A copy of the Statute of Kalisz, which provided legal protection and rights to Jews dating back to 1264, was set on fire in front of the town hall.

Far-right activist Piotr Rybak, who was previously convicted for the public burning of a Jewish effigy, also addressed the rally. “We will chase off this mob to Israel, just like in 1968,” he said, alluding to anti-Jewish purges under Poland’s former communist leaders.

Historian Maciej Błachowicz blamed Kalisz Mayor Krystian Kinastowski for not preventing the event and compared the destruction of the historic statute to the burning of books during the Kristallnacht pogroms against Jews by Nazi Germany in 1938, reported Poland’s public television TVP network.

Mayor Kinastowski reportedly condemned the march while simultaneously defending the “multicultural and tolerant” history in the city of 100,000.

Anti-Semitic chants were also hear at a far larger Independence Day march in Warsaw. Mayor Rafal Trzaskowski declared the capital as no place for “fascist slogans” and tried to prevent the march by court order, local media reported, but his effort was overruled by the Polish government.

Widespread condemnation of the incidents was swift.

“The people who organized the shameful and scandalous assembly in Kalisz on November 11 will suffer legal consequences,” said Polish Interior Minister Mariusz Kamiński, while the country’s Foreign Ministry Spokesperson Łukasz Jasina said the march was “used to propagate hate, anti-Semitism and religious intolerance.”

“Such attitudes have nothing to do with patriotism,” said Roman Catholic Bishop Rafał Markowski, who chairs the Committee for Dialogue with Judaism of the Polish Bishops’ Conference. Stressing that such displays of anti-Semitism “undermine the dignity of our brethren and destroy social order and peace,” Bishop Markowski, added, “They are in direct contradiction to the Gospel and the teaching of the Church.”

Underscoring that “the unequivocal condemnation by Polish officials is important and necessary,” Israeli Foreign Minister Yair Lapid said he welcomed Warsaw’s official response and expects “the Polish government to act uncompromisingly against those who took part in this shocking display of hate,” according to a statement obtained by TV7.

“The horrific anti-Semitic incident in Poland reminds every Jew in the world of the strength of hatred that exists in the world,” said Lapid, whose late father was a Holocaust survivor.

98% of the 3.3-million Jews who lived in Poland before World War II were murdered during the Holocaust.

The latest incident comes amid criticism that Poland’s ruling Law and Justice (PiS) party has deepened ties with extremist groups in recent years.