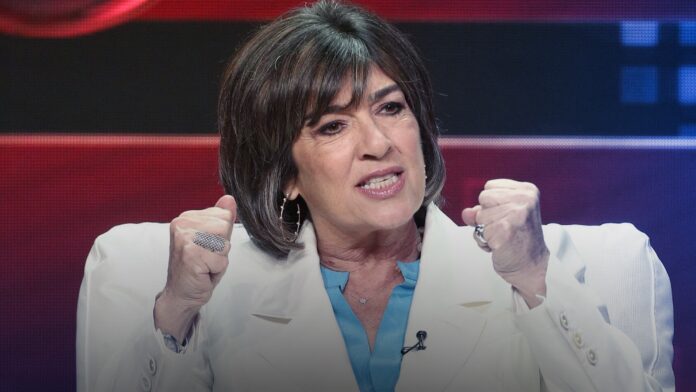 After CNN’s Christiane Amanpour commemorated Kristallnacht — the infamous anti-Jewish pogrom carried out throughout Nazi Germany — by likening it to the Trump presidency, her comments were met with an immediate backlash, with many expressing shock at the belittling of the horrors of Nazi Germany.

The backlash was immediate.

In an exclusive statement to Breitbart News, Morton Klein, head of the Zionist Organization of America (ZOA) — the oldest pro-Israel organization in the United States — expressed disgust at the ill comparison.

Noting his personal experience as a child of Holocaust survivors, Klein stated he was “disgusted” by Amanpour, whom he accused of “trivializing and belittling the Holocaust by absurdly and recklessly comparing President Trump’s pro-Israel, pro-Jewish tenure to that of Nazi Germany,” while demanding she be “condemned, ostracized and fired.”

“This mindless analogy is even more cruel and ridiculous given that he has an Orthodox Jewish daughter, son-in-law, and grandchildren,” Klein added.

He then went on to contrast between the two extremes.

“Would the Nazis have protected the Jewish State, as Trump has, by putting the most severe sanctions on the true enemy of the Jews today — Iran — who is developing nukes and repeatedly threatens to destroy the Jewish State?” he asked.

Pointing out a double standard, Klein continued his criticism.

“Did Amanpour ever compare the Obama regime to the Nazis given that he gave $150 billion to the antisemitic Iran regime, giving it greater ammunition to succeed in its Nazi-like plans of annihilating the Jewish State?” he furthered.

Klein also called out the noted silence from Jewish organizations and those who embrace the “cancel culture.”

“Where is ADL, AIPAC, AJC, the Reform, Conservative, Orthodox and Reconstructionist Jewish movements, Hadassah and the National Council of Jewish Women, Jewish Women International, the Conference of Presidents in demanding her immediate dismissal?” he asked. “Where is the cancel culture when we legitimately need it to rid the journalism world of the always-hostile-to-the-Jewish-State Amanpour?”

Klein was far from alone in his criticism.

“The time has come for the corporate media to fire people like this,” wrote conservative talker Mark Levin. “These media corporations must police themselves and their newsrooms.”

“People are feeling a lot of different things right now after the election. That’s OK,” wrote Rep. Michael Waltz (R-FL). “What’s not OK is @CNN and @camanpour comparing US politics to the Holocaust. Not only are these implications divisive but they’re also incredibly disrespectful to the Jewish community.”

The Orthodox Jewish Public Affairs Council also referred to the comments as despicable.

“Despicable. @camanpour compares verbal fact checking of a POTUS to a Nazi pogrom in which dozens of Jews were murdered,” wrote the group dedicated to countering defamation. “Amanpour uses the book burning of Kristallnacht to reach this comparison thus ignoring the overall deadliness and human cost of the night.”

“Politicizing and exploiting the six million Jews murdered in a systematic campaign of genocide to score cheap political points is reprehensible,” said Linda, founder and CEO of Momsonamitzvah. “At a time when our country needs healing and dialogue, Amanpour must now address her horribly offensive and inappropriate comparison with a public apology immediately.”

“Hey @CNN @camanpour please stop using the horrors of the Holocaust to justify an agenda,” wrote StopAntisemitism.org. “Our suffering is not yours to play political ping pong with.”

“Weimar Jews and the Holocaust that followed have become fun little playthings – media toys – for journalists to casually toss around, use and exploit to make themselves feel way more important than they are and to elevate fear,” tweeted journalist Glenn Greenwald. “This is repugnant and offensive, @camanpour.”

“DISGUSTING demeaning of the Holocaust by ⁦@camanpour⁩, ⁦@CNN,” tweeted republican strategist Boris Epshteyn. “How far the left goes to wrongfully attack ⁦@realDonaldTrump⁩ is depraved. Will ⁦@cnn do the right thing?”

“@camanpour appallingly compares Trump’s tactics to the Nazi kristallnacht?” tweeted Trump campaign adviser Steve Cortes. “So our President criticizing the media and litigating an election = genocide? Such an insult to the victims of the Nazis, and to the brave Americans who smashed that tyranny.”

Author and radio host Eric Metaxas was most blunt.

“Ms. Ahmanpour should be fired. Fired. FIRED,” he wrote. “This is one of the most offensive things ever said on television. But it also reveals a level of ignorance that is frightening.”

Former CNN senior digital producer Steve Krakauer stated that CNN staff as a whole are as responsible as Amanpour.

“@CAmanpour comparing Trump to Hitler and Kristallnacht, saying they ‘assault’ the ‘same values’ is obscene and outrageous,” he wrote. “But Amanpour alone should not be condemned – it took writers, producers and executives at CNN to allow this inflammatory nonsense on the air.”

“@CNN and @camanpour should be ASHAMED of themselves,” tweeted political commentator Bryan Leib. “Serious question…How did this segment make it on the air?”

“Awful from @camanpour,” wrote Algemeiner’s Dovid Efune. “Using the Holocaust as a political cudgel is the height of insensitivity and disrespect.”

Efune also questioned her consistency in commemorating the event.

“Did she mark Kristallnacht in previous years? Or only when politically opportune?”

“The memory of the massacred millions is sacred. This segment is a desecration,” he concluded.

Author and filmmaker Dinesh D’Souza described the comments as a “new low.”

“We all knew CNN has been terrible, but this is a new low,” wrote D’Souza. “Comparing Trump to Nazis purging Jews… REALLY?”

“Why has @ADL not come out to condemn @camanpour @CNN over this repugnant comparison of @realDonaldTrump to Kristallnacht and the Nazis, who murdered 6 million Jews?” he wrote.

“How is this acceptable? Where are all the progressive voices? Is your silence not a gross double standard?”

On Thursday, Breitbart News was first to report on Amanpour’s egregious remarks.

In the opening of her daily global affairs interview program earlier that day, Amanpour dedicated her introduction to commemorating Kristallnacht (or “Night of Broken Glass”) which occurred this week in 1938.

“This week, 82 years ago, Kristallnacht happened; it was the Nazis’ warning shot across the bow of our human civilization that led to genocide against a whole identity,” she stated.

Flashing scenes of Jewish victims followed by the Nazi burning of Jewish books, Amanpour then continued by comparing the forces behind the notorious historical event with the current administration.

“And, in that tower of burning books, it led to an attack on fact, knowledge, history and truth,” she added. “After four years of a modern-day assault on those same values by Donald Trump, the Biden/Harris team pledges a return to norms, including the truth.”

Amanpour is the Chief International Anchor for CNN and host of CNN International’s nightly interview program Amanpour, which has aired for nearly a decade.

In April last year, Amanpour suggested that “lock her up” chants were a form of hate speech that the FBI could have “shut down.”

Amanpour’s latest comments not only grossly misinform but drastically belittle the horrors of the past.

The U.S. Holocaust Memorial Museum describes the period following the night that violent anti-Jewish demonstrations broke out across Germany, Austria, and the Sudetenland region of Czechoslovakia:

Over the next 48 hours, violent mobs, spurred by antisemitic exhortations from Nazi officials, destroyed hundreds of synagogues, burning or desecrating Jewish religious artifacts along the way. Acting on orders from Gestapo headquarters, police officers and firefighters did nothing to prevent the destruction. All told, approximately 7,500 Jewish-owned businesses, homes, and schools were plundered, and 91 Jews were murdered. An additional 30,000 Jewish men were arrested and sent to concentration camps. Nazi officials immediately claimed that the Jews themselves were to blame for the riots, and a fine of one billion reichsmarks (about $400 million at 1938 rates) was imposed on the German Jewish community.

The greater significance of the event is also noted.

“Kristallnacht was a turning point in the history of the Third Reich, marking the shift from antisemitic rhetoric and legislation to the violent, aggressive anti-Jewish measures that would culminate with the Holocaust.”