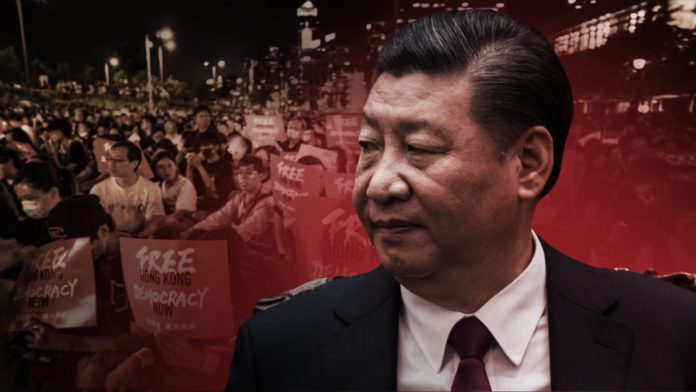 Chinese president Xi Jinping warned his countrymen that they will experience the full weight of China’s might if they attempt to fracture the Chinese Communist state and that outside forces who seek to help the pro-democracy movement expand beyond the borders of Hong Kong will have to face down the Chinese government.

Xi made the comments in a meeting with Nepali Prime Minister K.P. Sharma Oli, whose state borders China, though rarely presents enough of a threat to the Chinese government to hear open warnings. Xi’s statements were, Chinese state media reports, aimed directly at Tibet, Taiwan, Hong Kong, and anyone who expresses concern over Chinese government “reindoctrination” efforts in Xinjiang.

“Anyone attempting to split China in any part of the country will end in crushed bodies and shattered bones,” Xi Jinping is quoted as saying. “And any external forces backing such attempts at dividing China will be deemed by the Chinese people as pipe-dreaming.”

The South China Morning News, which is an arm of the Chinese government’s media empire, claim the statement is aimed not just at Hong Kong protesters but also pro-Tibetan protesters who tried to make their presence known in Nepal ahead of Xi’s visit. The Nepalese government did China’s bidding and cracked down on the demonstrations, but it’s clear that now that Hong Kong is fighting Chinese incursion, other Chinese territories are gaining courage.

Chinese officials later added that American forces should also heed Xi Jinping’s warning, even though the U.S. government hasn’t expressed support for the pro-democracy protests in Hong Kong: “The current situation in Hong Kong is grave, and it is a warning to the US and all other direct and indirect forces standing behind the extremist violence in Hong Kong.”

“He also referred to Taiwan and any forces intervening in the Xinjiang issue,” the official added. “Tsai Ing-wen has leveraged the Hong Kong issue to raise her prospects in the coming election in Taiwan. It is within expectations that the Chinese leader made such remarks during his visit to a neighbouring country.”

China — and the Chinese-backed Hong Kong goverment — seem to be losing control over the island city-state. Last week, Hong Kong police fired the first volley of live ammunition at protesters, criticially injuring at least one student, and protesters responded by attacking police and police vehicles. Police fought back by releasing tear gas in public buildings, targeting protesters; but, in some cases, harming bystanders and journalists in violation of international treaty.