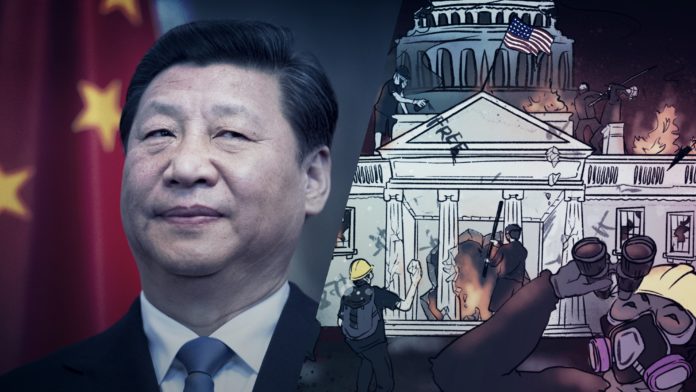 The People’s Daily, the official newspaper of the Communist Party of China, and the government’s CCTV broadcaster published images this week depicting Chinese people ransacking an inaccurate rendition of the White House, a call to violence in response to Washington supporting pro-democracy Hong Kong protesters.

Both outlets shared the image of a poster reading, “The United States passed the Hong Kong Human Rights and Democracy Act. You’re welcome to come ‘renovate’ the White House.” “Renovate” has become the preferred term of Hong Kong protesters for vandalizing and destroying businesses tied to the Chinese government in an effort to take money out of Beijing’s pockets that would otherwise be used to buy weapons to attack peaceful protesters.

The poster shows a burning building that looks like the White House, but also features the dome of the U.S. Capitol, eliciting mockery from many online users, according to several online outlets. The people shown vandalizing the building are wearing black, evoking the image of the anti-communist Hong Kong protesters.

While the “People’s Daily Overseas” Twitter account continues to show the picture, the official Facebook pages of the People’s Daily and CCTV appear to have taken them down. Online users screencapped and otherwise recorded evidence of the images being up on the page.

Chinese state propaganda outlets regularly use Twitter and Facebook to spread their communist ideology, even though the average Chinese person has no access to those outlets, which Beijing bans outright. Chinese citizens are forced to resort to Weibo, a social media outlet modeled after Facebook that faces significant censorship and China often uses to manipulate public sentiment.

The call to destroy the White House appears to be a response to the protesters rendering the Hong Kong Legislative Council unusable in July, breaking into the building and vandalizing the legislative floor. In that event, protesters were careful not to destroy any historical artifacts or areas of the Legislative Council complex not used for passing laws. Protesters stated their intent was to make it impossible for lawmakers to pass a proposed bill that would have empowered China to extradite anyone present in Hong Kong for any reason.

It is also a direct response to President Donald Trump signing the Hong Kong Human Rights and Democracy Act, a law that instructs the State Department to report annually on the human rights situation in Hong Kong and rescind the city’s special trade status if found to be lacking. Hong Kong enjoys special economic privileges with the United States because it is supposed to be governed as an autonomous, capitalist city that respects Western human rights norms, unlike the rest of China. The bill also protects individual protesters by ensuring that arrests during peaceful protests do not jeopardize U.S. visa applications.

As the Epoch Times noted, the response to the post was largely mockery or outrage. Joshua Wong, one of the most prominent pro-democracy protest organizers in Hong Kong, republished the image and compared it to the White House and the Capitol, noting whatever building the illustrator created was neither of them.

Wong was among the high-profile pro-democracy activists featured in the Chinese-produced video game “Fight the Traitors Together” (alternatively translated as “Everyone Beat the Traitors”), in which players assault Hong Kong protesters with baseball bats.

The Hong Kong protest movement began in June, a rekindling of protests against growing Chinese belligerence against the city in 2014. Protesters objected to the extradition bill but ultimately agreed on making five demands of their government: the full withdrawal of the bill, freedom for political prisoners, the right to elect all members of the Legislative Council, an independent probe into police brutality, and an end to the government calling the protests “riots.”

Hong Kong Chief Executive Carrie Lam ceded to withdrawing the bill but has patently refused to engage the other four demands, keeping the protest movement alive. Lam has also unleashed the Hong Kong police to engage in extensive use of tear gas, rubber bullets, water cannons, and live fire to subdue the protesters, even in most cases where protesters arrive at marching sites unarmed. Hong Kong Police Commissioner Chris Tang is currently in Beijing on a working visit in anticipation of large rallies planned for this Sunday.

Communist China is far from the first to threaten or encourage attacks on the White House. Among the most prominent examples of this decade are images and videos from the Islamic State (ISIS), whose propaganda arm regularly threatened bomb attacks on the White House in its heydey during the presidency of Barack Obama. The People’s Daily image also recalls propaganda generated by China’s colony North Korea prior to the in-person meetings between President Donald Trump and Kim Jong-un. In 2017, North Korea broadcast a video simulating a nuclear attack on Washington, DC, an accompaniment to officials’ threats of committing such an attack in statements.