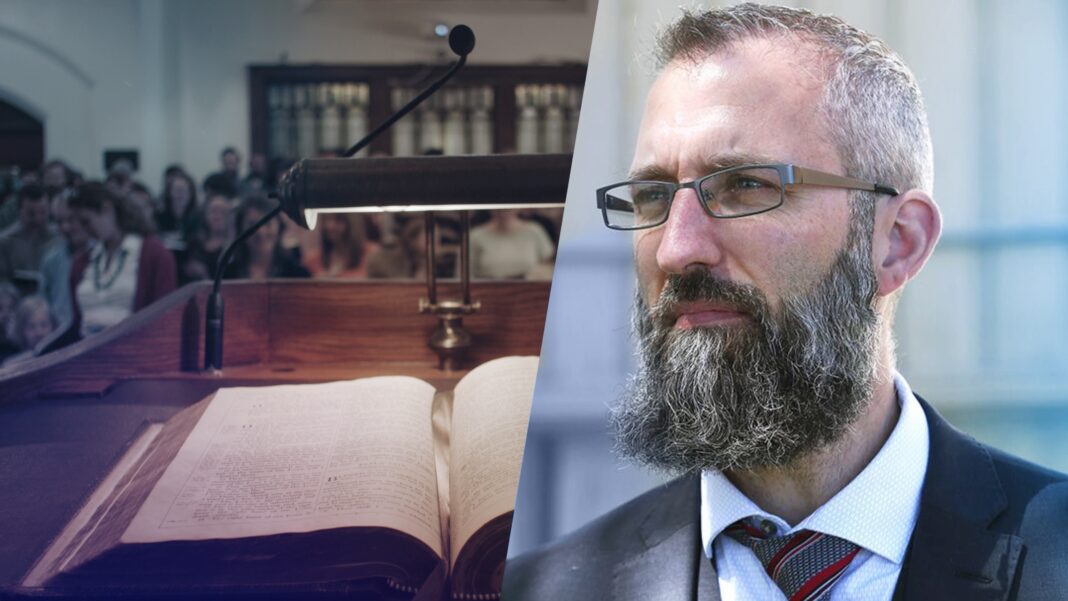 “The Fairview Baptist Church pastor was arrested after police in a helicopter discovered where Stephens was holding worship services,” Faithwire reported Friday.

Law enforcement officers later arrived at his home and took him into custody while his children cried.

Following his release, officials also reopened his church to the congregation, according to World.

“Police arrested Stephens on June 14 for not enforcing pandemic health protocols at an outdoor worship service. Authorities had changed the locks at his church earlier in June. He must return to court on July 14 for a hearing on his alleged health order violations,” the report said.

Rebel News shared video footage of the pastor being reunited with his family after his release:

“Today is a very thankful day. I’m thankful that the restrictions are done and rescinded, including the court orders that go along with that,” he added.

In a press release Thursday, the Justice Centre for Constitutional Freedoms confirmed Fairview Baptist Church and Grace Life Church near Edmonton were “unchained and released from government seizure.”

In an interview with Rebel News prior to his second arrest, Pastor Tim Stephens discussed the astonishing lack of accountability and overreach of the government.

“What has so astounded us in this past year is just how much authority and power the government has and how they essentially do what they want without any kind of accountability,” he told Rebel. “We know ultimately at the end of the day, it’s not about science, it’s not about the data.”

“What’s sad about them coming and taking our personal and private property here is that there’s no accountability, there’s no recourse,” the Pastor continued. “The courts still haven’t even talked about the constitutionality of these orders. We understand that we’re in the minority in terms of our convictions about gathering during COVID-19, but the laws of our land are there to protect the minority from the majority and from essentially the power of the government.”

“It’s clear how inconsistent they are and how discriminatory they are to places of worship,” Stephens explained. “The hypocrisy of it is obvious. Our leaders show the rules don’t apply to them or how they can just make a quick decision and allow a mass gathering, whether that was last June with Black Lives Matter or this June with that vigil in London, Ontario.”

“We’re serving a higher authority than even our governing authorities. We’re trying to serve God and live for Him. That will always be our commitment,” he added.

When asked what the response has been by those in his congregation to such persecution, the Calgary Pastor stated that his church has expanded and that the trying of their faith and conviction has brought them joy.

“The congregation has been overjoyed because it has forced them to count the cost of what it means to truly follow Jesus,” he explained. “When their faith and when their commitments are tested… there is a joy in doing what we believe is right and following God and living for the Lord Jesus Christ.”

“Each and every week, we have others from other congregations in Calgary coming to join us, and so it seems that the more the government pressures to try to suppress our gatherings, it just encourages more people who want to be a part of those gatherings,” he told the reporter. “There is a real joy and a real sense of anticipation for hearing the word preached and for being together in fellowship.”

We were told in the last days “all who live godly in Christ” will suffer persecution (2 Timothy 3:12). We need to be unwilling to be censored from saying truth from the word of God, even if we face man’s consequences. We need to not allow the godless agendas this world is propagating to be pushed through our pulpits as well. We need to instead unashamedly counteract lies with Biblical accuracy, free of conforming, toning down, or silencing our message.