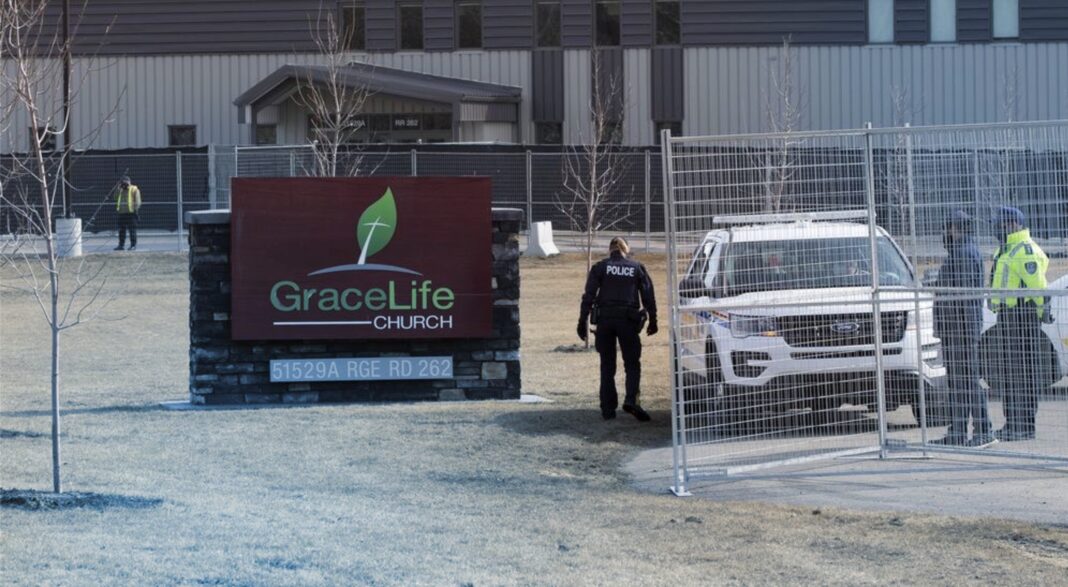 Standing in front of a Canadian church fenced off by police for not following COVID rules, Independent MP Derek Sloan announced a petition to demand the church be allowed to open.

“I have just been here speaking with Pastor Coates and his wife, we have a petition on my website to open Grace Life Church,” said Sloan on Wednesday. “Sign that petition, let’s open this church.”

In an early morning raid on Wednesday, Canadian police constructed a barricade around Grace Life, which has stayed open despite a local health order mandating its closure after its pastor, James Coates, refused to comply with COVID regulations.

Sloan’s petition, just over a day after its launch, has already more than 5,300 signatures. “This act is tyrannical government overreach, and is a direct violation of Canadian Charter rights,” the petition states.

Coates was jailed from February 16 until March 22 for defying COVID-related orders in Alberta. He refused to accept bail conditions which blocked his release unless he agreed to not hold church services amid severe lockdowns.

Coates walked out of the Edmonton Remand Centre as a free man on March 22, after a $1,500 fine was paid “as time served.” He is to stand trial on May 3 to answer for one public health charge. After his release, he went straight back to preaching, despite police presence outside his church.

Sloan spoke with LifeSiteNews about his petition, saying that as an MP, he can present his petition to the Canadian parliament, which he hopes will raise awareness of what is going on with Grace Life.

“I will do that, I will give it a few weeks to try and get as many signatures as we possibly can, but I will present it on the floor of the House of Commons,” said Sloan. “What it will do, hopefully, is play a part in raising awareness of this issue and letting people express themselves. You know, in all honesty, if we have a petition that has tens of thousands or hundreds of thousands of signatures, you know, that means something. I encourage people to sign it.”

Sloan said he was already in the Edmonton area on other business on Wednesday, but when news broke of what happened at Grace Life, he made it a point to “get down there right away.”

“I had planned to meet with Pastor Coates anyways, not knowing this was going to happen, during our time in Edmonton. It was providential that this happened the very day we were scheduled to be there,” said Sloan.

Sloan was booted from the Conservative Party of Canada (CPC) in January by his own caucus members. Since leaving the CPC, Sloan has become more outspoken against COVID lockdowns as well as potential mandatory vaccines.

Sloan is part of the non-partisan “End the Lockdowns National Caucus,” which says it is a group “unified in pursuit of the truth, and resolved to ensure there is open, honest, and public debate regarding the COVID-19 government response.”