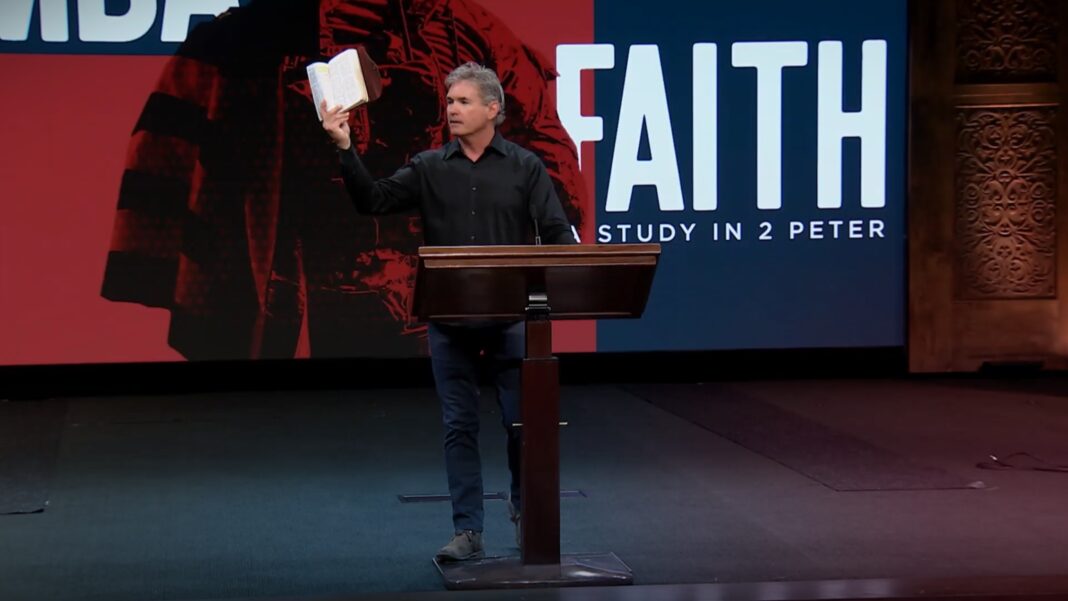 Two churches in California are defying Gov. Gavin Newsom’s orders to keep their doors closed because of the coronavirus, including Grace Community Church in a Los Angeles suburb, where Pastor John MacArthur posted a letter on Friday titled, “Christ, Not Caesar, Is Head of the Church.”

MacArthur laid out his “biblical case for the church’s duty to remain open.” The letter reads, in part:

Christ is Lord of all. He is the one true head of the church (Ephesians 1:22; 5:23; Colossians 1:18). He is also King of kings—sovereign over every earthly authority (1 Timothy 6:15; Revelation 17:14; 19:16). Grace Community Church has always stood immovably on those biblical principles. As His people, we are subject to His will and commands as revealed in Scripture. Therefore we cannot and will not acquiesce to a government-imposed moratorium on our weekly congregational worship or other regular corporate gatherings. Compliance would be disobedience to our Lord’s clear commands.

Some will think such a firm statement is inexorably in conflict with the command to be subject to governing authorities laid out in Romans 13 and 1 Peter 2. Scripture does mandate careful, conscientious obedience to all governing authority, including kings, governors, employers, and their agents (in Peter’s words, “not only to those who are good and gentle, but also to those who are unreasonable” [1 Peter 2:18]). Insofar as government authorities do not attempt to assert ecclesiastical authority or issue orders that forbid our obedience to God’s law, their authority is to be obeyed whether we agree with their rulings or not. In other words, Romans 13 and 1 Peter 2 still bind the consciences of individual Christians. We are to obey our civil authorities as powers that God Himself has ordained.

When any government official issues orders regulating worship (such as bans on singing, caps on attendance, or prohibitions against gatherings and services), he steps outside the legitimate bounds of his God-ordained authority as a civic official and arrogates to himself authority that God expressly grants only to the Lord Jesus Christ as sovereign over His Kingdom, which is the church. His rule is mediated to local churches through those pastors and elders who teach His Word (Matthew 16:18–19; 2 Timothy 3:16–4:2).

Therefore, in response to the recent state order requiring churches in California to limit or suspend all meetings indefinitely, we, the pastors and elders of Grace Community Church, respectfully inform our civic leaders that they have exceeded their legitimate jurisdiction, and faithfulness to Christ prohibits us from observing the restrictions they want to impose on our corporate worship services.

The letter said the church does not need the state’s permission to hold church services and urged other congregations to follow suit.

“Our prayer is that every faithful congregation will stand with us in obedience to our Lord as Christians have done through the centuries,” the letter concluded.

MacArthur’s letter comes weeks after Calvary Church Chino Hills, also a Southern California congregation, opened its door for service on May 31, Pentecost Sunday — the holy day that celebrates the anointing of the church by the Holy Spirit 50 days after Christ’s resurrection.

“The church transcends the governments of this world and the politics of this world because the church is a living, breathing, divine institution,” Pastor Jack Hibbs said in a video addressing other pastors about the lockdown and announcing the decision to reopen the church.

Hibbs said his prayer is that a “revival might break forth across this land” because California churches opened their doors.