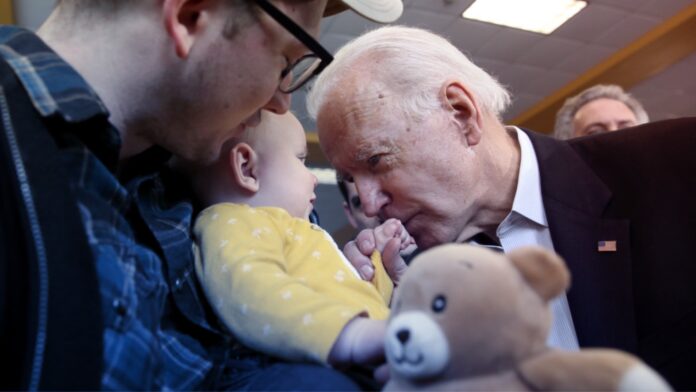 The 2018 initiative, called the “As You Are” campaign, centred on a map tracking LGBTQ “acceptance stories” across the country. It was spearheaded by Biden’s eponymous foundation, which has been described as “further[ing] the work the Bidens did over eight years in the Obama administration and cement[ing] the former vice president’s more than four-decade legacy in public life.”

Of the nearly 500 individuals highlighted, many were children under the age of 18, with one account even chronicling a “gender nonconforming” 18-month-old.

One mother submitted her story to the Biden Foundation about her six-year-old transgender child and saw it promoted by the group, despite declaring her daughter “gender nonconforming” since 18-months-old:

“My youngest child is six and has been gender nonconforming since being able to articulate at 18 months old. [My child] was born biologically male and initially indicated that he was “a boy who liked all girl things.” This past year, [she] has socially transitioned and now prefers the pronouns she/her and will be starting first grade soon as her authentic self.”
Another individual’s story hyped by the Biden Foundation, which was staffed by a host of former Biden aides, was a parent discussing their seven-year-old “gender non-conforming boy” who loves to watch drag race shows:
“My youngest child is a fabulous gender non-conforming boy who loves ballet and the RuPaul Drag Race show… At age 7 he is a powerful advocate for himself and other children just like him.”
Another story the Biden Foundation featured was an individual declared herself “a parent of a 9-year-old transgender son,” chronicling her regret over not letting her child transition earlier:
“But when my son was age 4 and began expressing that he felt like a boy, I did struggle. … I allowed him to express himself with his preferred clothing choices, and even a haircut, but I misstepped on allowing him to socially transition at a young age. Because I wanted an easy path for him. So, I mistakenly stifled him, dismissed him.”
A 17-year-old also submitted their story about transitioning genders “at the end of [their] 8th grade year” to the project, and subsequently saw it promoted by the Biden Foundation:
“I came out as transgender at the end of my 8th grade year. When I started high school, I had socially transitioned.”

What’s more, the Biden Foundation produced exclusive video content to positively chronicle the story of a child who transitioned genders. The video was later promoted across the foundation’s social media platforms.

While the transgender individual’s –”Rio” – exact age is not included in the video, pictures of the child clearly reveal her young age.

In light of the former veep’s presidential campaign, the foundation ceased operations, but its pro-transgender messages for children remain harmful.

Not only does the messaging pushed by the Biden foundation perpetuate radical, far-left narratives about gender, it also okays subjecting children to permanently life-altering surgeries which many ultimately come to regret.

We live in a world where children are continually in peril. Right from the womb, children’s lives are in danger, and after they are born, they are pushed into sin as quickly as possible. Adults (parents, politicians, teachers, entertainers, etc.) in this generation promote homosexuality, transgenderism, sexual immorality, feminism, abortion, meanwhile condemning the Bible, Christians, Purity, and obedience to God.

The preconditioning of children to sin is also something that the Bible does not treat lightly: