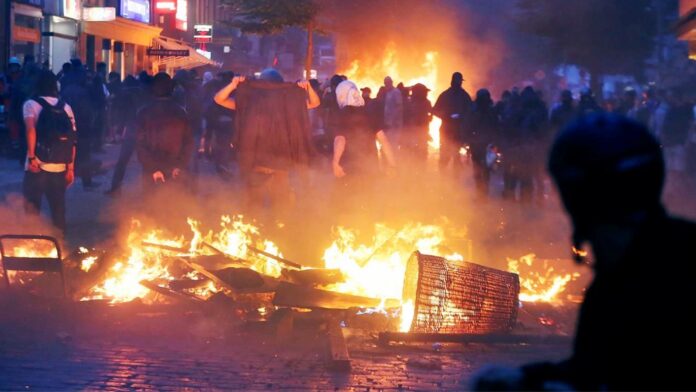 A video produced by the district office of Friedrichshain-Kreuzberg features a sticker promoting the far-left extremist Antifa group as part of a presentation for an anti-right-wing extremism award.

The video, which promotes the Silvio-Meier Prize, features a sticker that states “Antifa is Love”.

According to the Berlin government website, the prize is awarded to those who take “a clear position against right-wing extremism, racism, exclusion, discrimination, and wants to encourage active, non-violent advocacy for freedom, political and cultural emancipation regardless of origin, religion, social position, or sexual identity, and support and honour appropriate action”.

Last weekend, a mob of around 50 Antifa extremists destroyed 19 cars in the district near the Liebigstrasse 34 and Rigaer Strasse 94 buildings which have been squatted and occupied by Antifa for years.

The violence, which included at least 13 local buildings being damaged, was in response to raids by local police at the “Riga 94” building last week.

On Monday, a property manager, construction workers, and a lawyer for the owner of Riga 94 attempted to enter the building but were attacked by Antifa militants. Police later arrived and allegedly used tear gas on the far-left occupiers.

Antifa violence has escalated in Germany in recent years, with a German Federal Office for the Protection of the Constitution (BfV) report released last month claiming that it was not unthinkable far-left extremists may engage in targetted killings of political opponents in the near future.