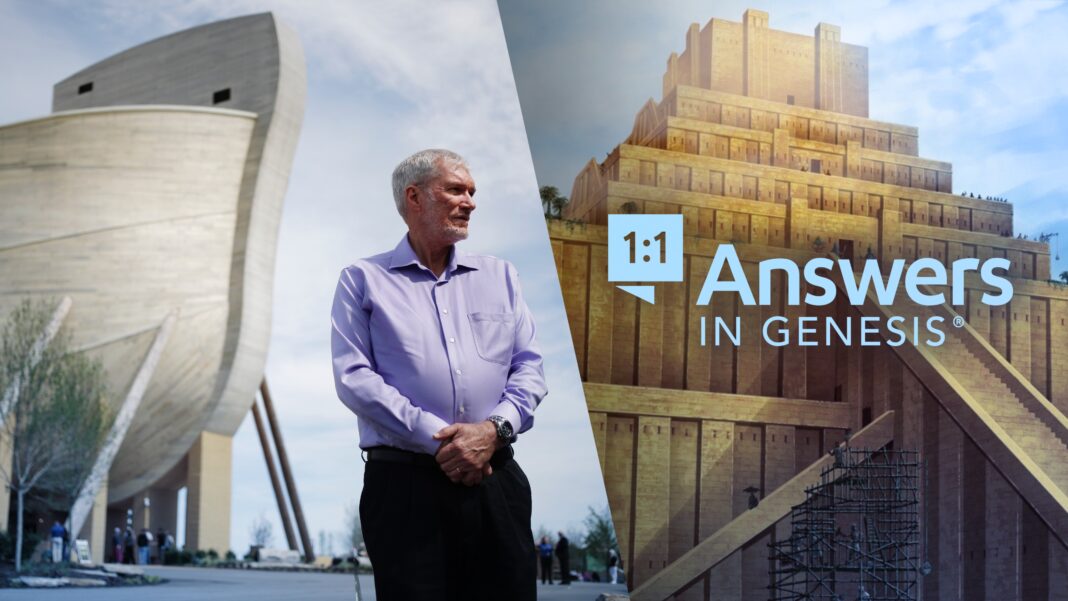 Three reasons Answers in Genesis plans to build a replica of the Tower of Babel, rightfully considered a symbol of man’s rebellion after the global flood.

After Noah’s family disembarked the ark, God essentially gave man an opportunity to start over. As he had done to Adam and Eve (Genesis 1:28), the Lord blessed Noah and his family and instructed them to be fruitful, multiply, and fill the earth (Genesis 9:1). While Noah’s descendants multiplied, they refused to fill the earth. Instead, they decided to stick together and gathered in a place called Shinar. Refusing to scatter and desiring to make a name for themselves, they began to build a city and a tower with a top “in the heavens” (Genesis 11:4).

The Lord confused their language so that the people would not understand one another. Unable to communicate effectively and continue working together, the people ceased their rebellion at Babel and eventually filled the earth as the Lord intended.

Recently, Answers in Genesis announced its plans to build a Babel attraction at the Ark Encounter property. Since Babel is best known for its rebellion against our Creator, this structure might seem like an odd addition for a ministry devoted to upholding the authority of God’s Word and spreading the gospel through its many outreaches. Of course, building the ark made sense since it serves as a constant reminder of both God’s mercy and judgment. But why would anyone, let alone a Bible-believing ministry, want to construct a reminder of man’s rebellion?

Let’s look at a few reasons why we believe this is an important project.

First, our purpose in building a Babel attraction at the Ark Encounter is diametrically opposed to the reasons of the original builders over 4,000 years ago. Our rebellious ancestors started building their city and tower in defiance of God’s command to fill the world and to glorify themselves (“make a name for ourselves”). The structure we plan to build will be for the purpose of glorifying God by teaching the authority and authenticity of his Word and by sharing the gospel of Jesus Christ. Our goal certainly isn’t to build a structure reaching into the heavens!

Second, our culture has been inundated by false views of our origins, teaching that we evolved from ape-like ancestors. While most evolutionists are probably not racists, the philosophy they hold is inherently racist, implying that some people groups are more closely related to apes than others. For example, the late Stephen Jay Gould, a leading evolutionist of the 20th century, acknowledged that acceptance of evolution spurred the rapid growth of racism:

Biological arguments for racism may have been common before 1850, but they increased by orders of magnitude following the acceptance of evolutionary theory. The litany is familiar: cold, dispassionate, objective, modern science shows us that races can be ranked on a scale of superiority. If this offends Christian morality or a sentimental belief in human unity, so be it; science must be free to proclaim unpleasant truths.

A Tie to Recent Events

By eliminating our true history, evolutionists are left with a false view of humanity. Thus, they explain the so-called racial differences through the lens of a fundamentally racist philosophy.

The Bible provides us with the true history of humanity. What people classify today as racial differences are rightly explained by the Babel event. Noah’s descendants scattered from Babel in family groups and settled new lands. Separated from one another, the various groups began to express distinct traits. No group is more “evolved” than any other. Some people may have achieved greater advancements in agriculture, industry, or technology due to having a greater number of skilled tradespeople when the language division occurred, but this does not mean they are “more human” than others. Instead, all people today descended from Noah and are members of the one human race (we’re all of “one blood,” per Acts 17:26).

This teaching leads to a closely related issue and our third reason to build a tower. Education systems and politicians throughout Western nations have incited and encouraged division by promoting racist concepts like critical race theory. A large part of CRT is the ungodly idea that we must instruct people to see and judge people based on the melanin level in their skin, which is the opposite of what Scripture teaches. All people are descendants of Adam, and we are all made in God’s image. Our true problem is sin, which includes prejudice and racism, and the solution is the same for all of us—the gospel of Jesus Christ. Ironically, critical race theory is also the exact opposite of Martin Luther King Jr.’s dream that people would be judged by the content of their character rather than the color of their skin.

Our goal in building the Babel attraction at the Ark Encounter is to proclaim mankind’s true history as described in God’s Word. In doing so, we will boldly confront racist and ethnocentric philosophies and practices. Most importantly, we will proclaim the only solution to racism and every other sin that besets mankind: the gospel of Jesus Christ.

When it’s open, we believe you will be thrilled with its gospel emphasis and its answers to an important question of our day: where did all the people groups come from?