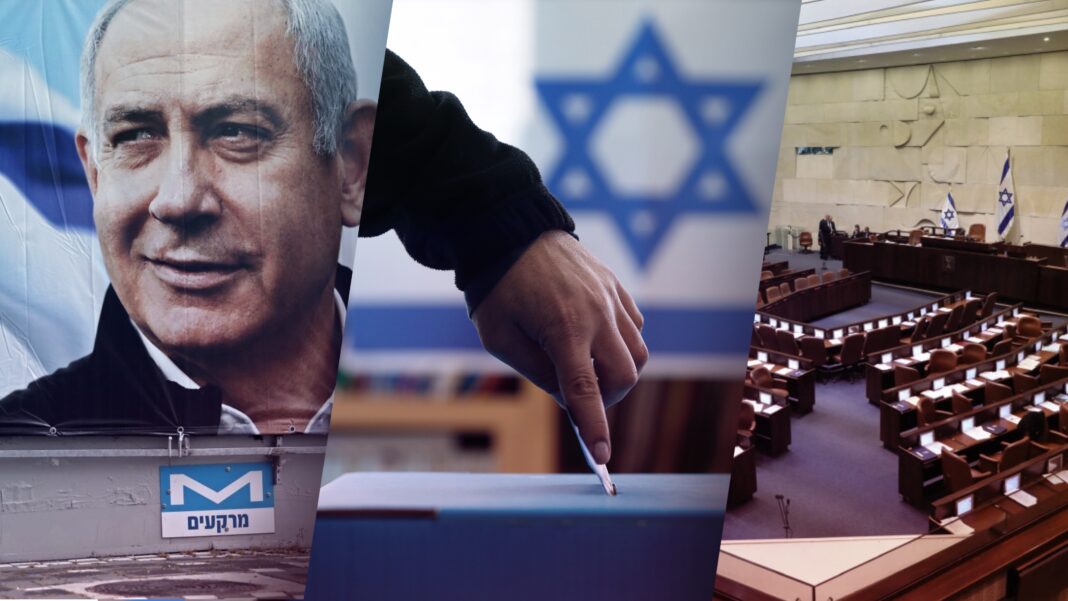 Tuesday saw another round of elections in Israel. I’ll talk in more detail about the vote itself when we begin the Middle East section [below]. I certainly went into the polling place with a very clear idea of my preferred outcome. But I’ve learned over the years that no matter the level of my zeal, my excitement, my desire, what I want does not always fit what God has planned. The Lord does not base His actions on the strength of my passion. He moves according to what best fits His plan for this world.

“Hindsight is 20/20” says the old adage. Hindsight is actually one of the greatest tools toward a deeper faith. Because it is through looking back that we can often see just how wrong we were and how right God always is. When we’re in the midst of it, we cry, “Why didn’t God hear our prayers? Why is He letting this happen? He must be punishing us.” The fact is God did hear your prayer. He just chose a different path. And it’s very possible that His reason for saying “No” to your prayer had nothing to do with you. Instead, He is making moves to forward history toward its final conclusion. Just like we can look back at events in our lives now and say, “Oh, that’s what you were doing, Lord,” there will be a time when we will look back on the events of these days and say, “Now I see what You were doing, God! Great plan!”

This brings to mind words from the wonderful hymn of faith penned by the prophet Habakkuk:

Habakkuk 3:17-18 KJV – “Although the fig tree shall not blossom, neither shall fruit be in the vines; the labour of the olive shall fail, and the fields shall yield no meat; the flock shall be cut off from the fold, and there shall be no herd in the stalls: Yet I will rejoice in the Lord, I will joy in the God of my salvation.”

I may not understand all that God is doing in Israel or in the US or in other nations of the world, but I don’t have to. God is working out His plan. My ultimate citizenship is in heaven, and the day is coming soon when my residency will transfer to the glorious dwelling My Savior is preparing for me even now.

Philippians 3:20-21 KJV – “For our conversation is in heaven; from whence also we look for the Saviour, the Lord Jesus Christ: Who shall change our vile body, that it may be fashioned like unto his glorious body, according to the working whereby he is able even to subdue all things unto himself.”

On Tuesday, Israel had its fourth election in just two years. And, after all is said and done, it looks quite possible that a fifth round might be in our near future. Israel is a parliamentary democracy in which we vote for members of the Knesset (parliament), rather than for a prime minister. It is the Knesset members who then vote a person into the prime minister’s position. There are 120 seats in the Knesset, so it takes a majority of 61 to vote a prime minister in. While this may seem fairly easy in a two-party system like you find in the US, in Israel we had 13 different parties who had members voted into the Knesset.

The party that won the greatest number of seats was Likud, Netanyahu’s party, with 30 seats. Next, with 18 seats, was Yesh Atid, the party of Netanyahu’s current rival, Yair Lapid. From there begins the “Big Bang” of all the rest. One party had nine seats, another had eight, three more had seven, four had six, and on from there. For Netanyahu to be reelected as prime minister, he and his Likud party have to convince at least 31 members from other parties to align with them to form a big enough bloc for a 61-seat majority. Thus, the bargaining began. But try as they might, over all four of the elections, Netanyahu and Likud have only been able to muster together 60 votes – one shy of what is necessary.

In the “politics makes strange bedfellows” category, in his quest for that 61-seat majority Prime Minister Netanyahu has been courting the Arab Israeli population. These are not Palestinians, but Arab citizens of Israel who are a mainstreamed segment of the population. Arab attitudes toward Israel have been changing throughout the Middle East, including inside Israel itself. Omri Saar, an Arab Likud youth manager, affirms this, saying, “I now see a greater attraction from this community appearing since the Abraham Accords, the peace accords with the Arab countries…. It’s not only something that influences countries abroad, it also changes things inside Israel.” Netanyahu recognized this shifting attitude and saw a potential opening. Losing his tie and calling himself Abu Yair (father of Yair, following the Arab practice of referring to oneself as the parent of one’s firstborn son), the prime minister campaigned in areas that have traditionally been strongly against the Likud party. The Arab population, realizing that putting all their political eggs in the Palestinian basket is keeping them from greater political influence, has been responding. “What I tell people is to stop complaining from afar, to stop saying, ‘They don’t give us anything, we have nothing.’ I tell people to come, to influence things by getting closer to the decision-making center, where decisions that concern everyone are made,” says Majdi Qasem, an Arab activist for the Likud party. In one of those bizarre twists that can only happen in the world of politics, it just might be the Arab vote that ultimately gives Netanyahu his majority.

The repeated unfruitful elections are causing a great frustration to settle into the country. People seem to be confused. Emotions are overtaking common sense and reason. As always, though, we as believers seek to look at the current geopolitical landscape through the eyes of Scripture. Based on the mood and malleability of many Israeli voters, it is easy to see how eventually Israel will bow down to an emerging, very different, super-charismatic world leader.

In one more election angle, the Palestinian militants seemed to let folks know who they didn’t want to see in the prime minister position. Netanyahu held an election day visit in the southern Israel city of Beersheba. Hamas seized the opportunity and fired a rocket from the Gaza Strip toward the city. Thankfully, their timing was as bad as their aim, and the rocket landed harmlessly in a field outside of town after the prime minister had already left the area. The retaliation by the Israeli Defense Forces was much more on the mark, with an airstrike destroying a Hamas rocket factory and military outpost.

Southern Israel isn’t the only area where the skies have seen flying weapons. On Tuesday, rockets were fired at the American base located at the Conoco gas field in Deir a-Zour in Syria. According to Lebanese television network Al-Mayadeen, a number of US military personnel were wounded. The Biden administration has yet to comment on the incident.

A Saudi oil refinery in Riyadh was attacked by drones last Friday. Yahya Sarea, military spokesman for the Houthis, gave credit to the Yemeni rebels, saying, “Our armed forces carried out at dawn today an operation…with six drones which targeted the Aramco company in the capital of the Saudi enemy, Riyadh.” It didn’t take long for the Saudis to hit back, using their air force to pound Houthi facilities in Yemen’s capital, Sana’a, and in the port province of Hodeidah.

Not to be outdone, Iran carried out a UAV attack this past week in the Syrian desert near Palmyra. While they have supplied plenty of these suicide drones to their proxy militias, this was the first time we know of that they themselves have used drones to attack ground targets.

This week in Iran nuclear news, western intelligence sources confirmed that the nation is hiding uranium enrichment equipment and other related materials at secret locations. This came as a surprise to absolutely no one. Matériel such as carbon fiber, pumping equipment, spare parts for centrifuges, and whatever else is needed for the enrichment of weapons-grade uranium is being stock-piled in hidden sites, despite the requirement that it all be open and available to UN inspection. These same western intelligence sources claim that new revelations demonstrate a determination by Iranian leadership to never comply with its nuclear agreements. Again, the only surprise there is the claim that these are “new” revelations.

The complicated relationship between the Biden administration and Israel continues to get complicated-er. First, the new administration is formulating a plan to “reboot” US relations with the Palestinians. While still in its early stages of preparation, it pledges to the Palestinian leadership a restoration of hundreds of millions of dollars in economic and humanitarian support. They also have a goal of reopening the Palestinian diplomatic mission in Washington, D.C.10

Yet even while courting a closer relationship with the Palestinians, the US is expecting Israel to be its strong arm of support to American allies in the Middle East. Dhahi Khalfan Tamim is a deputy police chief in Dubai who was made famous after the assassination of a Hamas operative in the UAE city a decade ago.

“We have the Iran nuclear treaty, which is being resurrected from the dead where it belonged & that is almost begging for Iran to dump a nuclear bomb on Israel”
Read more
Israel & Middle East

"UNRWA is an org. that engaged in political advocacy and enables incitement to violence. Therefore, it should not exist in its current form.”
Read more
Israel & Middle East

As world powers ramp up efforts to return to the JCPOA, Iran is testing nuclear-capable ballistic missiles in violation of the agreement.
Read more