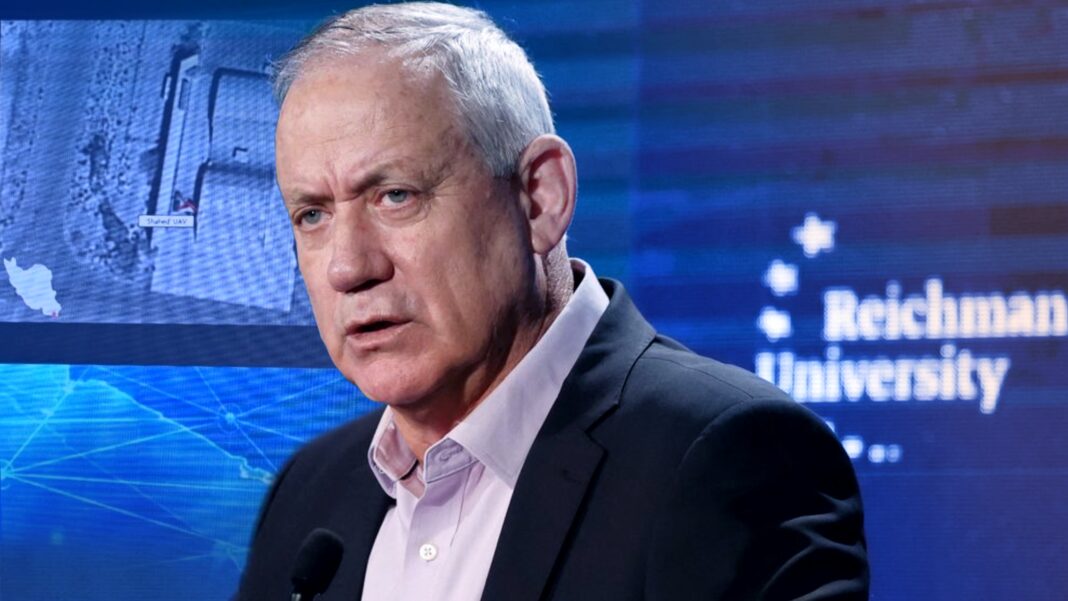 Gantz also uncovered bases in Shabhar and Keshem, in southern Iran used for attacks by UAVs.

In a speech addressed to the world, the Minister of Defense presented Iran’s methods of action and the basis of its ambition to become a global hegemon who would impose its radical ideology. Gantz emphasized the important cooperation and alliance with the United States and the countries of the world.

In his opening remarks, the Minister of Defense said that Israel is not “a lone nation, and the Iranian threat is not just against her.”

The Iranian method of becoming a regional hegemon is to take over backward countries like Yemen which ranks last in the “fragile” index, Syria ranks third before last, Iraq and Lebanon. The method is clear, “as the song goes, ‘first, we take Damascus then we take Berlin,'” Gantz said.

Gantz revealed that Iran was carrying out explosive UAVs using its missiles and presented two major bases in the Shabhar area and the island of Kashm in southern Iran, from which operations were carried out towards the maritime space and where advanced attacking UAVs are still located today.

Gantz added, that “Iran is acting outside the region as well, passing crude oil and weapons to Venezuela, operating its Quds Forces in South America and trying to infiltrate its influence into Afghanistan. Iranian terrorism is exported under the directive of Khamenei and the regime’s top leaders.”

“One of the central tools is UAVs, which are a precise weapon capable of striking strategic targets at a distance of thousands of kilometers, and therefore this ability already endangers the Sunni countries, international forces in the Middle East, as well as countries in Europe and Africa,” he underscored.

The Defense Minister later revealed that: “In February 2018, Iran launched a Shahed m141 type UAV from T4 airport in Syria, which carried TNT explosives. The UAV was intercepted near Beit She’an [in Israel] and its destination was, according to our assessments, terror operatives in Judea and Samaria. Iran not only uses UAVs to attack, but also to deliver weapons to its proxies.”

Gantz referred to the world’s commitment and said: “In the face of the threat, the world has many tools to act, and it must exercise Plan B for the diplomatic option. We will continue to work in full cooperation with our American friends and other countries. Foreign, security, and moral values. There is no doubt that a diplomatic solution is better, but alongside it, there must also be a use of force, which is a continuation of diplomacy by other means. It’s to reach the common goal.”