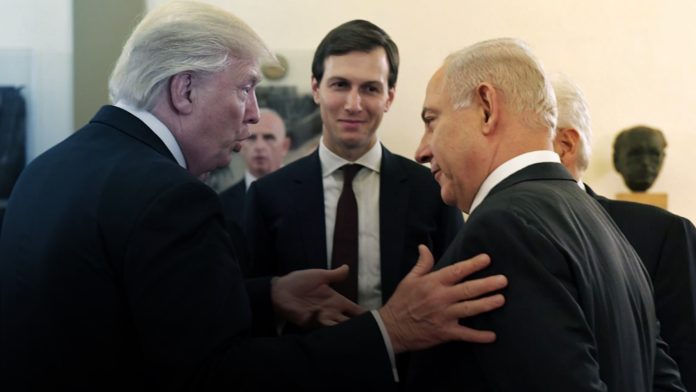 The White House is expected to publish the details of its “Deal of the Century” next week in Washington. Preliminary reports Thursday indicated that the plan would give Israel sovereignty over the Jordan Valley and all the settlements and formalize Israeli control over Jerusalem.

At a meeting at the US Embassy in Jerusalem on Thursday evening, US Vice President Mike Pence invited Prime Minister Benjamin Netanyahu and Blue and White leader Benny Gantz to Washington to discuss “regional issues as well as the prospect of peace in the holy land..”

“The United States and Israel are strong partners, and the Prime Minister’s visit is an opportunity to discuss our shared regional and national security interests,” the White House said in a statement.

The meeting will take place on January 28.

“We’ve had no better friend than President Trump,” Netanyahu said following the invitation. “ That friendship is expressed in the fact that we’re in the American Embassy in Jerusalem, that Jerusalem was recognized by President Trump as Israel’s capital, that President Trump has recognized Israel’s sovereignty over the Golan Heights, and now, with this invitation, I think that the president is seeking to give Israel peace and security, the peace and security that it deserves.

“So, I gladly accept your invitation, his invitation to come to Washington and discuss with him his ideas on how to advance peace and to work closely with him to advance that goal,” the prime minister continued. “With such friends in the White House, with such backing from the United States, we should get as broad a consensus as possible around the efforts to achieve security and peace, peace and security for the State of Israel.”

Channel 12 further reported that all of the settlements will be linked territorially, except for 15 of them, and that Israel will be able to apply sovereignty already, if it agrees to the plan. Moreover, Jerusalem would be under total Israeli control.

Channel 12 noted that all of Israel’s security demands were accepted.

The peace plan includes demanding Palestinians to recognize Israel as a Jewish state, demilitarize Gaza and take away Hamas’ weapons and recognize Jerusalem as the capital of Israel, Channel 12 said. Also, the plan will not have Palestinians control 30% of the West Bank and not control any borders.

The US peace team headed by special advisor Jared Kushner and special envoy Avi Berkowitz was expected to visit Israel this week to discuss the plan. However, they cancelled the trip at the last minute.

News of the plan and its rollout was met with mixed reactions.

Defense Minister Naftali Bennett responded by stating strongly that his right-wing Yamina party would not allow any land to be given to Arabs or for a Palestinian state to be established.

“Israel may be facing a historic opportunity, along with significant dangers,” he stated.

Beit El Council head Shai Alon warned that the creation of a Palestinian state in the West Bank would create a second war front with the Palestinians, akin to Gaza.

“According to reports we are talking about recognition of a Palestinian state,” Alon said. “If that is correct, we are talking about a second Gaza war [in the West Bank] that will take place in the heart of the nation. We will see missiles on Kfar Saba, Rannana Hadera and other areas of Gush Dan.

“The creation of a Palestinian state between the Jordan Valley and the Sea, will [push] the region to new heights of terror and violence that we have never known and do not want to know,” he concluded.

The IDF reported on Thursday that they had in fact increased security in the West Bank amid expectations of the roll out, expecting a potential violent escalation.

However, the settler movement largely celebrated the potential upcoming move.

“This is a dramatic historic moment,” YESHA head and Jordan Valley Regional Council head David Elhayani said. He called it a “huge diplomatic achievement for the prime minister.

“The application of Israeli sovereignty over the Jordan Valley, the [northern] Dead Sea, and settlements in Judea and Samaria is the fulfillment of the Zionist dream and a fateful moment in the history of the settlement movement,” he said.

News of the possible imminent publication of the plan comes as Netanyahu is under pressure from Yamina to take steps as early as next week to annex the Jordan Valley and the Megilot region of the Dead Sea. However, sources said that the White House had asked the prime minister to hold off on any unilateral moves until after publication of their plan.

Right-wing officials told Ynet that what Netanyahu got from the Trump administration is the “gift of a lifetime,” because now, Israelis will discuss the issue of annexing the Jordan Valley instead of his request to be granted immunity for alleged bribery and breach of trust.

They also said that “the Americans are fully involved in the elections here,” meaning that the US is putting its influence behind Netanyahu, who is more than likely to be seen by many Israelis as the better politician to lead such a massive historical move.

The Blue and White Party said the roll out does not mean they will stop their demand for the Knesset to debate the immunity request submitted by the prime minister.

A source close to Gantz says he saw the plan and does not think it will be politically damaging to him.

Joint List leader Ayman Odeh reacted, as well. He said, “I don’t yet know what the ‘Deal of the Century’ includes, but I know full well what is the tragedy of the century: The solution for the [Arab-Israeli] conflict has been known for years, but the governments of Israel prefer [the Jewish settlements of] Ofra and Yitzhar to ending the occupation and a peaceful future of our children.”

He claimed that Netanyahu and Trump are attempting to “save each other” from their respective legal issues.

Similarly, MK Ahmad Tibi called the American invitation extended to Netanyahu and Gantz to visit the White House and learn the details of the deal, “active participation in the Likud elections campaign.”

“Never did a foreign element [such as the US] get so involved in the Israeli elections,” he said.

Tibi added that, “no American administration will be able to extinguish the aspiration of a people [Palestinians] to rid themselves of an occupier [Israel] and win its freedom.”

In Zechariah 12:3, God warns world leaders of the repercussions of seeking to divide Jerusalem saying: “And in that day will I make Jerusalem a burdensome stone for all people: all that burden themselves with it shall be cut in pieces, though all the people of the earth be gathered together against it.”

Michele Bachmann and Bill Koenig have both extensively cautioned American leaders of this Chapter in Zechariah and the prophesied consequences.