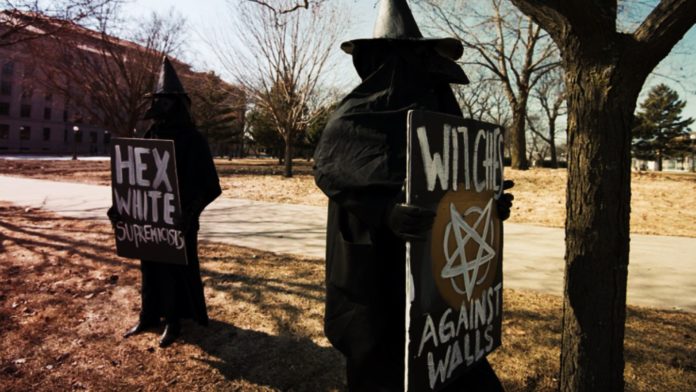 Leviticus 19:31 KJV – “Regard not them that have familiar spirits, neither seek after wizards, to be defiled by them: I [am] the LORD your God.”

As if battling House Democrats’ impeachment inquiry against him wasn’t enough, President Donald Trump will next have to face a “binding spell” cast by “thousands” of witches late Friday night.

As Halloween approaches at the end of the month, several media outlets are reporting witches who oppose President Trump are planning to cast a “binding spell” on his administration. Such reports of witchcraft being used against the President are nothing new. Witches have been trying to cast spells against Trump since his inauguration in 2017.

Scheduled for Oct. 25 at 11:59 pm, these self-proclaimed “witches” are planning to conduct a ritual which is meant to “bind,” but not harm the President unlike a “curse” or a “hex.” These witches believe they are doing something positive for the entire country by not allowing President Trump to cause harm to the US by his actions.

As CBN News has reported, witches have been increasing their political involvement since Trump was elected, casting spells to “Bind Trump.” Last year, the 13,000-member Facebook group was casting regular spells on Donald Trump.

A year ago, a throng of real-life witches was fighting back against the administration by hosting a spell-casting ritual against newly appointed Supreme Court Justice Brett Kavanaugh in New York.

2 Timothy 3:1-3 KJV – “This know also, that in the last days perilous times shall come. For men shall be lovers of their own selves, covetous, boasters, proud, blasphemers, disobedient to parents, unthankful, unholy, Without natural affection, trucebreakers, false accusers, incontinent, fierce, despisers of those that are good”

Witchcraft has been steadily on the rise in the US since the 1990s.

Trinity College in Connecticut tracked witchcraft’s prevalence for some 18 years. Researchers found that in 1990, there were an estimated 8,000 Wiccans in the US. That number grew to 340,000 in 2008.

The Pew Research Center later discovered in 2014 that 0.4% of Americans, or about 1 to 1.5 million people, identify as Wicca or Pagan.

Father Vincent Lampert, a Roman Catholic priest and the designated exorcist of the Archdiocese of Indianapolis, warned those who practice rituals of witchcraft and the occult more broadly give an opening to evil in the lives of participants.

“Some of them may be doing it thinking it’s just fun, but they are gambling with evil, and just because their motive is one way doesn’t mean they’re not opening up an entry point for evil in their own life,” Lampert told The Washington Examiner.

Lampert also warned those who practice witchcraft to beware of a wolf in sheep’s clothing.

“I think evil will present itself as something good, maybe initially to attract people’s attention, to draw people in, but then ultimately people are going to discover it’s all about fracturing their lives,” he said.

Isaiah 8:19-22 KJV – “And when they shall say unto you, Seek unto them that have familiar spirits, and unto wizards that peep, and that mutter: should not a people seek unto their God? for the living to the dead? To the law and to the testimony: if they speak not according to this word, it is because there is no light in them. And they shall pass through it, hardly bestead and hungry: and it shall come to pass, that when they shall be hungry, they shall fret themselves, and curse their king and their God, and look upward. And they shall look unto the earth; and behold trouble and darkness, dimness of anguish; and they shall be driven to darkness.”