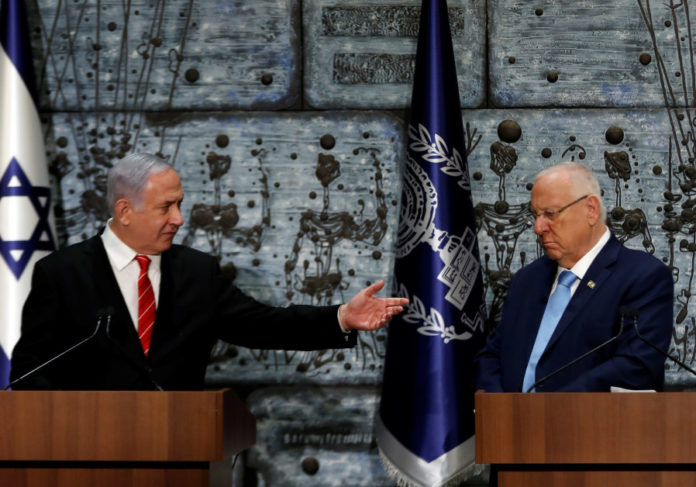 Prime Minister Benjamin Netanyahu has been given the chance to form a government for the sixth time on Wednesday, after succeeding in his five terms in office but not having the opportunity to do so following the April election.

President Reuven Rivlin formally gave Netanyahu four weeks to form the government, after a meeting at the President’s Residence with Blue and White leader Benny Gantz failed to bring about a breakthrough. The deadline will be October 24.

“Netanyahu had the best chance to form a government,” Rivlin said in a speech alongside the prime minister.

A Channel 12 poll broadcast Wednesday night found that the public prefers Netanyahu go first in a rotation with Gantz. But to avoid another election, a majority of respondents would like to see Likud replace Netanyahu with another candidate.

The survey of 700 respondents representing a statistical sample of the population was taken by pollster Camille Fuchs. The margin of error was 4%.

Rivlin said he gave the mandate to Netanyahu, because he received 55 recommendations from MKs, compared to Gantz’s 54. He called upon parties to stop disqualifying each other and lamented that a unity government was not formed.

In his speech, Rivlin revealed that he had offered the possibility of passing a law enabling a prime minister to suspend himself while under indictment and have a vice prime minister take over until the prime minister is cleared. Such a bill could have enabled Gantz to run the country following a potential Netanyahu indictment. But Gantz rejected the idea.

Netanyahu already has a bloc of 55 MKs from his Likud Party and his allies in Yamina, Shas and United Torah Judaism. He would need Yisrael Beytenu, Labor-Gesher or Blue and White to join in order to form a government. All have repeatedly refused to do so.

“My inability to form a government is slightly less than that of Gantz,” Netanyahu said in accepting the mandate.

Netanyahu called on Gantz to form a government led by him, citing security, diplomatic and economic reasons and raising the prospects of both war with Iran and a peace process with the Palestinians led by US President Donald Trump.

If Netanyahu fails, Rivlin could give the mandate to Gantz or to another candidate in Likud. He could also tell Knesset Speaker Yuli Edelstein that there is no candidate. If that were to happen, there would be 21 days in which any candidate could try to get 61 MKs together and form a government.

In his address, Rivlin noted that by law, after the candidate with a mandate fails to form a government, instead of giving the mandate to another candidate, the Knesset can choose a candidate with the support of 61 MKs.

“The people do not want additional elections,” Rivlin said.

Gantz reiterated after Netanyahu was given the mandate that his party would not enter a government led by the premier while possible indictments are waiting in the wings. He blamed Likud for the failure to form a unity government, because Netanyahu’s party refused to give up the other parties in its political bloc.

“Blue and White is committed to the idea of unity, but this requires negotiations among the two largest parties alone in order to reach agreement on the content and essence of the next government,” Gantz said.

Sources close to Rivlin had said on Tuesday that he would likely only appoint a candidate to form a government next Wednesday after the Rosh Hashana holiday. But after no progress was made in initial talks between Likud and Blue and White, Rivlin changed his mind.

Just in case there would be a breakthrough that would lead to coalition talks, Likud’s coalition negotiating team came to the President’s Residence. The Blue and White team did not come. They said that they were prepared to come quickly if there was a breakthrough, but that they had low expectations from Netanyahu.

Rivlin left Netanyahu and Gantz to talk alone for half an hour, but their talks did not succeed.