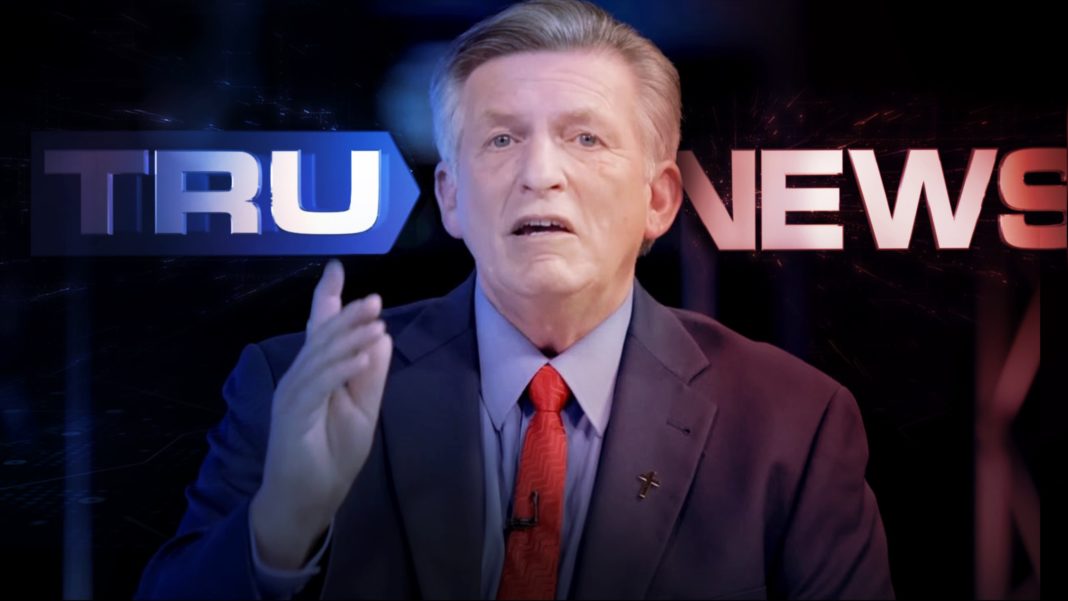 Yet another anti-Semitic rant has emerged from the ironically named “TruNews,” in-which Rick Wiles exclaims to his audience that there is a “Jew Coup” taking place in the United States.

The comments were made in reference to the democrats attempt to impeach U.S. President Donald J Trump. Rick Wiles not only blames the Jewish People for this inquiry but claimes that there is a Zionist Kabal that will soon begin targeting Christians for the slaughter!

Below is a transcript of their comments:

That’s the way the Jews work. They are deceivers; they plot, they lie, they do whatever they have to do to accomplish their political agenda. This impeach trump movement is a Jew coup, and the American people better wake up to it really fast because this thing is moving now towards a vote in the house and then a trial in the senate. We could have a trial before Christmas. This country could be in civil war at Christmas time.

People are going to be forced possibly by this Christmas to take a stand because of this Jew Coup in the United States. We have weeks to stop it. That’s why I am speaking out. That is why I am putting everything on the line, saying: there is a coup lead by Jews to overthrow the constitutionally elected President of the United States, and it is beyond removing Donald Trump. It is removing you and me. That’s what is at the heart of it.

You have been taken over by a Jewish Kabal, a bolshevik revolution and I am going to tell ya, the church of Jesus Christ, your next. Get it through your head. They’re coming for you. There will be a purge. That’s the next thing that happens when Jews take over a country. They kill millions of Christians.

For those who are familiar with this group “TruNews,” these comments are of no surprise, as their anti-Semitic bigotry has been blatantly spouted for some time now. This, unfortunately, has not deterred some 350k people from following them across their social media alone.

Just a couple of months ago, TruNews host Doc Burkhar called on Christians around the world to “repent” for their support of Israel, following which he lead a bizarre alter call styled prayer that encouraged Jewish supporting Christians to asking God for forgiveness.

This so-called “Christian” group, has also claimed that the Jewish state is readying a “final solution” or holocaust to eradicate the Palestinian people.

For anyone who has adopted their dangerous replacement theology and conspiracy theories targeting God’s Chosen people (the Jewish people), I think it is worth explaining exactly what the Bible says regarding this, to avoid any further confusion:

In Genesis 12:3, God says, “And I will bless them that bless thee (Israel), and curse him that curseth thee (Israel): and in thee shall all families of the earth be blessed.”

The single verse written above alone should be enough to dismantle the theology of the Rick Wiles’ of the world. God not only commands the support of the Jewish people, and says that He (God Almighty, creator of everything) will be against those who come against them, but also says something very interesting…

In Genesis Chapter 12, God is explaining to Abraham the magnificent plan that He has for his seed. A plan to bring them into a promised land (Genesis 12:1), to make them into a great nation (Genesis 12:2), and make all the families of the earth be blessed through them (Genesis 12:3). This blessing that the world will receive is God choosing the Jewish people to be the line from which comes the messiah (Jesus Christ). The same Jesus who took the sins of the world and laid them on Himself, so that we, through His payment on the cross and in His resurrection, could receive the blessing of eternal life.

This covenant was made with Abraham, his son Isaac and his grandson Jacob. Jacob’s name later on in his life was changed to Israel. He had 12 sons, those sons had children, and all those after were called, the children of Israel. It is from this seed that Jesus Christ, the son of God, is born. Ie. Jesus Christ, Himself, is a Jew.

The Bible (Old and New Testament), is primarily written by God through Jewish People. The Bible also explains that there will be a time when the Jewish people will come to a saving knowledge of Jesus Christ.

Throughout scripture and history, we see the hatred that satan has for the Jewish people. This same satanic hatred is rearing its head once again in our world today.

I also believe that it would be apt to note what the Bible says about false accusations: In Deuteronomy 19, God, to the Jewish people, explains that if a person falsely accuses another, then the punishment that they sought for that person, will be instead done to them.

Deuteronomy 19:16-19 KJV – “If a false witness rise up against any man to testify against him that which is wrong; Then both the men, between whom the controversy is, shall stand before the Lord, before the priests and the judges, which shall be in those days; And the judges shall make diligent inquisition: and, behold, if the witness be a false witness, and hath testified falsely against his brother; Then shall ye do unto him, as he had thought to have done unto his brother: so shalt thou put the evil away from among you.”

I say that to make a point that should be bone-chilling:  Just because the governing powers do not stand for justice does not mean that God Himself will not choose to step in. That statement should scare the Anti-Israel conspiracies right out of Rick Wiles mouth and should also, for that matter, cause the democratic party to think twice about the actions and accusations they have been making against the President.

The devil has always despised the Jewish people and plotted against them. All of those who reject sound biblical theology for this Hebrew hatred are working on behalf of him and will meet his same end.