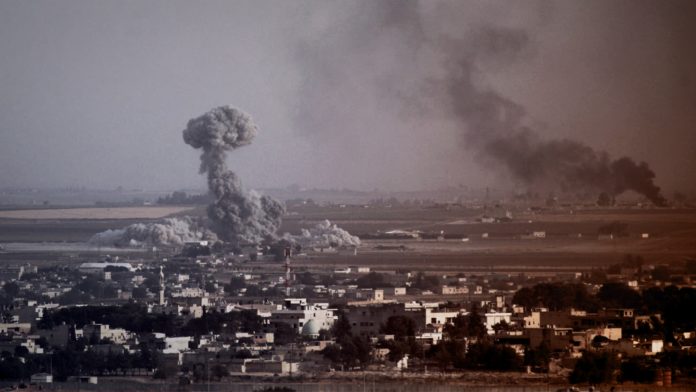 The Organization for the Prohibition of Chemical Weapons (OPCW) said that it was “collecting information with regard to possible use of chemical weapons” following reports white phosphorus was used by Turkish forces against civilians earlier this week, the Guardian reported on Friday.

Despite the US-brokered 120-hour ceasefire between Turkey and the Kurdish-led Syrian Democratic Forces announced by US Vice President Mike Pence, media sources reported the fighting continues, with disturbing images showing severely burned children that were allegedly wounded during Turkish attacks on northern Syria.

One of the images shows 13-year-old Mohammed Hamid Mohammed, who was wounded in Tal Tamir in what Turkey claims is the “safe zone.”

Mohammed suffered severe burns to his upper body, losing most of the skin on his torso, neck and arms.

The boy’s father, Hamid Mohammed, told the London Times that the boy was wounded in a Turkish airstrike in Ras al-Ain at midnight on Wednesday.

“I heard the Turkish jet overhead just before the explosion,” he said.

The boy reportedly endured 12 hours of agony before arriving at the hospital, where it took the nurses 20 minutes to manage to inject morphine into the child’s severely burnt body.

According to Hamish de-Bretton Gordon, a British chemical weapons expert and a former commander of the UK’s chemical, biological, radiological and nuclear regiment, the burns appeared consistent with white phosphorus, the use of which in urban areas and against civilians is deemed a war crime. The Daily Mail reported similar wounds suffered by Kurdish children in Hasakeh,

“The most likely culprit is white phosphorus,” Gordon said. “It is a horrific weapon, and has been used repeatedly during the Syrian civil war; unfortunately, its use has become increasingly normalized.” According to the NY Post,Gordon said that in the last 24 hours he has seen more photographs of the kind of chemical burn seen on Mohammed that in any stage of the Syrian civil war.

According to the Kurdish Red Crescent, six patients – both civilian and military – were hospitalized in the Syrian-Kurdish hospital in Hasakeh, a city controlled by the Syrian Democratic Forces that is now under joint control of the SDF and the Syrian army.

The patients reportedly arrived at the hospital with burns from “unknown weapons.” According to the NY Post, the Red Crescent has said it was “working together with [its] international partners to investigate the subject.”

According to the Guardian, Turkey rejected the accusations regarding its armed forces using white phosphorus or other non-conventional weapons, saying “it is a fact known by everyone that there are no chemical weapons in the inventory of the Turkish armed forces.”

White phosphorus is a substance used in combat to mark territory, as a smokescreen during the day and to light-up an area in the dark.

It is illegal to use in urban areas or in proximity to civilians as it lights up on contact with water – in the air or in the skin – being virtually impossible to put out as long as water is present, causing severe 3rd degree burns. Copper salt solutions must be used to end such fires.