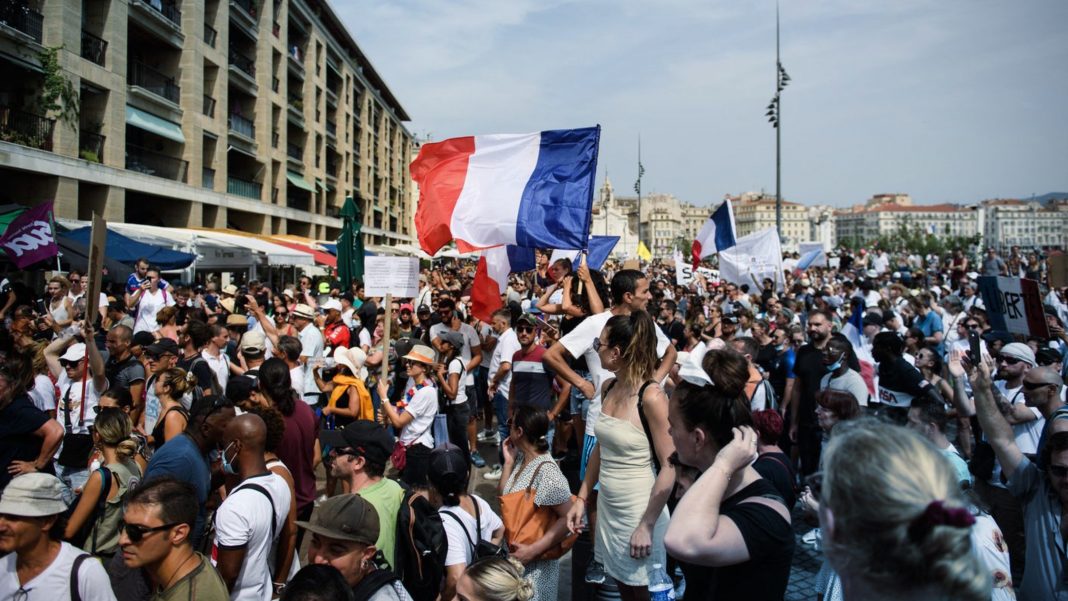 Anti-lockdown and anti-vaccine-passport protests erupted across Europe on July 24, according to media photos and videos.

Thousands upon thousands of demonstrators came out in London, Dublin, Paris, Rome, Athens, and other cities across Europe, according to footage and news reports.

The demonstrations in France appeared to be the most tense, with riot police firing tear gas as clashes erupted in central Paris.

Police sought to push back demonstrators near the capital’s Gare Saint-Lazare railway station after protesters knocked over a police motorbike ridden by two officers, news footage showed. Scuffles between police and demonstrators also broke out at the Champs-Elysees thoroughfare, where tear gas was fired and traffic was halted, it showed.

France’s Interior Ministry said that about 160,000 people partook in the protests on July 24—sharply up from 114,000 the previous week, Reuters reported.

The reason for the protest, in part, was due to pending legislation in France’s Parliament that would set up a vaccine passport system as well as a vaccination mandate for all health care workers. The passport bill would force people to show proof of COVID-19 vaccination or a negative test result to enter restaurants and other public areas—which critics have described as needlessly draconian.

Protesters railed against the proposed legislation, saying, “No to shameful pass,” while denigrating French President Emmanuel Macron as a “tyrant.”

“We need to wait a little bit before the French people can decide. … I think a part of France is always going to be unwilling, and that blackmail and threats won’t work,” protester Ayoub Bouglia, an engineer, told The Associated Press.

Thousands of Italian demonstrators gathered in Rome, Naples, Verona, and Milan on July 24, according to videos and photos published online.

In Verona, thousands chanted, “No Green Pass,” referring to the Italian government’s decision to implement a vaccine-passport-like system for people to enter local fairs, stadiums, theaters, and other gathering areas.

Also on July 24, demonstrators in Dublin, Ireland, emphatically called on the government to rescind lockdown and mask measures.

About 4,000 people appeared outside of the Greek Parliament in central Athens to protest against mandatory vaccinations, DW and other news agencies reported. Greek authorities used tear gas on some protesters.

Politicians in Germany are also deeply divided after Angela Merkel’s Chief of Staff warned the unvaccinated may be barred from entering public spaces, such as restaurants, if COVID numbers increase.

Although This warning proved divisive. Armin Laschet, the Candatate to replace Merkel, stated: “I don’t believe in compulsory vaccinations and I don’t believe we should put indirect pressure on people to get vaccinated,” he urged. “In a free country, there are rights to freedom, not just for specific groups.”

Vaccine passports may have been cloaked in the promise of “keeping people safe,” but from the beginning, it has been clear that its purpose has been far more sinister and totalitarian in nature. They are being used to force compliance; to deny freedoms to those who are reluctant or against taking the experimental COVID vaccine.

In the United States Gov. Ron DeSantis rightfully stated that these types of passports “would create two classes of citizens,” further calling it “completely unacceptable.”

“The virus itself is very real. But the fear-mongering, progressive push wrecking our country’s economy, and the suffocating of our freedoms should wake us all up,” David Fiorazo recently explained. “The agenda behind it all is pushing us closer to a new world order. It’s a globalist’s dream.”