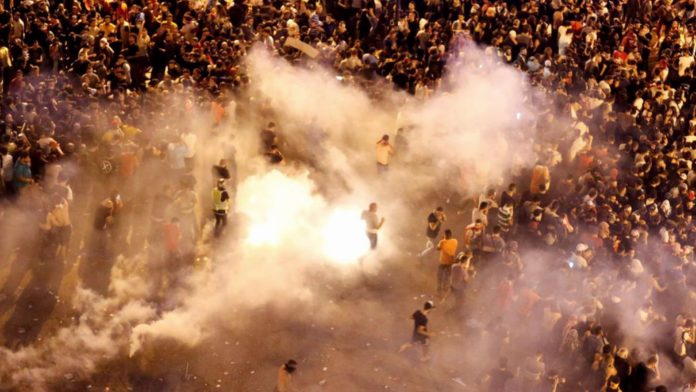 Protests have broken out in several countries across the world, with citizens unhappy for different reasons. Some are protesting over economic conditions, others are protesting over tax hikes and elsewhere protests are breaking out over controversial laws or prison sentences imposed by governments.

Here’s the latest in each of the country’s affected by violent clashes and unrest:

Chile’s president declared a state of emergency in Santiago on Friday night and gave the military responsibility for security after a day of violent protests over increases in the price of metro tickets.

“I have declared a state of emergency and, to that end, I have appointed Major General Javier Iturriaga del Campo as head of national defense, in accordance with the provisions of our state of emergency legislation,” President Sebastian Pinera said.

Throughout Friday, protesters clashed with riot police in several parts of the city and the subway system was shut after attacks on several stations.

Violent clashes escalated as night fell, and the ENEL power company building and a Banco Chile branch, both in the city center, were set on fire and several metro stations hit with Molotov cocktails.

The unrest started as a fare-dodging protest against the hike in metro ticket prices, which increased from 800 to 830 peso ($1.17) for peak hour travel, following a 20 peso rise in January.

Attacks on metro stations forced the closure of the entire subway system, which is the key form of public transport in the congested and polluted capital, carrying three million passengers a day.

“The entire network is closed due to riots and destruction that prevent the minimum security conditions for passengers and workers,” the metro operator said on Twitter, after attacks against nearly all the 164 stations where many gates and turnstiles were destroyed.

The Santiago Metro, at 140 kilometres (90 miles) the largest and most modern in South America, is expected to remain closed this weekend and could reopen gradually next week.

Hong Kong leader Carrie Lam took to the airwaves on Saturday to back the use of force by police ahead of a major anti-government march planned this weekend in the Chinese-ruled city, which has been battered by months of violent protests.

Following a week of relative calm, Sunday’s march will test the strength of the pro-democracy movement. Campaigners vowed it would go ahead despite police ruling the rally illegal.

In the past, thousands of people have defied police and staged mass rallies without permission, often peaceful at the start but becoming violent at night.

The trigger for unrest in Hong Kong had been a now-withdrawn proposal to allow extradition to mainland China, as well as Taiwan and Macau. The case of a Hong Kong man accused of murdering his girlfriend in Taiwan before fleeing back to the city was held up as an example of why it was needed.

Late on Friday the man, Chan Tong-kai, who is jailed in Hong Kong for money laundering, wrote to Lam saying he would “surrender himself to Taiwan” over his alleged involvement in the case upon his release, which could be as soon as next week.

Ms Lam said in an interview on Saturday with broadcaster RTHK that it was a relief as it could bring an end to the case.

She also said that police had used appropriate force in handling the protests, and were responding to protesters’ violence, amid criticism of heavy-handed tactics.

More than 2,600 people have been arrested since the protests escalated in June.

Protesters’ demands have, since then, swelled far beyond opposing the extradition bill, to take in broader concerns that Beijing is eroding freedoms granted when Britain handed the city back to China in 1997.

China denies the accusation and has blamed foreign nations such as the United States and Britain for inciting the unrest.

The crisis in the Chinese-ruled city is the worst since the handover and poses the biggest popular challenge to China’s President Xi Jinping since he took power.

Security forces fired tear gas and chased down protesters in Beirut on Friday after tens of thousands of people across Lebanon marched to demand the demise of a political elite they accuse of looting the economy to the point of collapse.

Riot police in vehicles and on foot rounded up protesters, according to Reuters witnesses. They fired rubber bullets and tear gas canisters, dispersing demonstrators in Beirut’s commercial district. Dozens of people were wounded and detained.

Prime Minister Saad Al Hariri blamed his partners in government for obstructing reforms that could ward off economic crisis and gave them a 72-hour deadline to stop blocking him, otherwise hinting he may resign.

Lebanese from all sects and walks of life have come out on to the streets, waving banners and chanting slogans urging Mr Hariri’s government to go.

The rallies follow warnings by economists and investors that Lebanon’s economy and graft-riddled financial system are closer to the brink than at any time since the war-torn 1980s.

“There are those who have placed obstacles in front of me … and in the face of all the efforts that I have proposed for reform,” Mr Hariri said, without naming names.

“Whatever the solution, we no longer have time and I am personally giving myself only a little time. Either our partners in government and in the nation give a frank response to the solution, or I will have another say,” he said.

Protesters poured through villages and towns as well as the capital Beirut for a second day. No political leader, Muslim or Christian, was spared their wrath.

Their chants called for leaders including Mr Hariri, President Michel Aoun, and Parliament Speaker Nabih Berri to step down.

Violent clashes escalated in Barcelona late on Friday, as radical Catalan separatists hurled rocks and fireworks at police, who responded with teargas and rubber bullets, turning the city centre into a chaotic battleground.

The deterioration came on the fifth consecutive day of protests in the Catalan capital and elsewhere over a Spanish court’s jailing of nine separatist leaders on sedition charges over a failed independence bid two years ago.

Around half a million people rallied in Barcelona earlier on Friday, police said, in the biggest gathering since Monday’s court ruling as separatists also called a general strike in the major tourist destination.

But while most marchers appeared peaceful, hordes of young protesters went on the rampage near the police headquarters, igniting a huge blaze that sent plumes of black smoke into the air, as police fired teargas to disperse them, an AFP correspondent said.

Other fires raged near Plaza de Catalunya at the top of the tourist hotspot Las Ramblas, where hundreds of demonstrators rallied in defiance of the police, who tried to disperse them with water cannon.

“Anti-fascist Catalonia!” they roared. “The streets will always be ours!”

Scores of police vans could be seen fanning out around the streets, their sirens screaming as the regional police warned people in a message in English on Twitter “not to approach” the city centre.

The situation later appeared calmer, according to a police spokesman.

Earlier, many thousands of “freedom marchers”, who had set out to walk from five regional towns on Wednesday, arrived in Barcelona wearing walking boots and carrying hiking poles.

The rally coincided with the general strike, prompting the cancellation of 57 flights, the closure of shops, business and several top tourist attractions, and slowing public transport to a trickle in a region that accounts for about a fifth of Spain’s economic output.