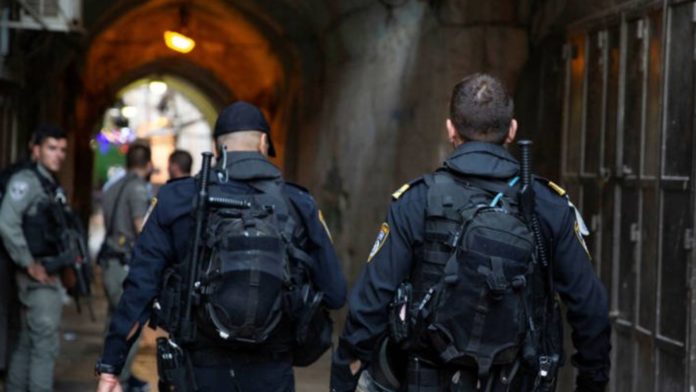 Israel Police released footage on Wednesday of the arrests of two residents of the southeastern Jerusalem neighborhood of Jebl Mukaber who were indicted on terrorism charges in a Jerusalem court on Sunday after they allegedly planned terrorist attacks on military and civilian targets on behalf of Islamic State in Jerusalem on Independence Day.

Ahmed Jabbis, 21, and Basel Abidat, 19, were arrested based on concrete intelligence about their planned attacks.

“On the night of October 28, 2019, dozens of Border Police officers raided two houses simultaneously in the village of Jebl Mukaber,” said an undercover Border Police officer who oversaw the operation. “This was a planned operation. We had information about the location of the accused, and as soon as conditions allowed, we detained them.”

According to the indictment, Jabbis and Abidat were active on ISIS-affiliated websites beginning in 2016, which spread the group’s religious and political messages as well as provide instructions on how to assemble bombs to carry out attacks.

In July, Abidat attempted to enter the Sinai Peninsula via Jordan in order to join with ISIS operatives, but was prevented leaving the Hashemite Kingdom by Jordanian security officials. Jabbis is said to have raised some NIS 2,000 which he transferred to a second party in order for it to be given to ISIS.

In September 2019, the two suspects allegedly discussed where they could carry out a terrorist attack in Jerusalem or against an IDF army base in the Jordan Valley with the aim of killing a maximum number of civilians and military personnel.

They allegedly planned to acquire automatic weapons to carry out a shooting spree at Safra Square in Jerusalem. A second target was an Independence Day event at the Sultan’s Pool. In the event that the two failed to acquire guns, they chose to carry out a stabbing attack as a backup plan.

Prosecutors have requested that Jabbis and Abidat be held until the end of the trial.

“Israel Police and Border Police counterterrorism units will continue operations in order to prevent any terrorist attacks in Israel,” the police said in a statement.

While Israel has largely avoided an attack by Islamic State, numerous Arab-Israelis have been arrested on suspicion of links with ISIS and plans to carry out attacks inspired by the Sunni extremist group.

Dozens of Israeli-Arabs have also been arrested upon their return to Israel after joining the terrorist groups in Syria, out of concern that their battlefield experience would allow them to establish terrorist networks or commit terrorist attacks within Israel.

Several Arab-Israelis are believed to have been killed while fighting in Syria’s eight-year civil war.

Psalm 122:6 KJV – “Pray for the peace of Jerusalem: they shall prosper that love thee.”‘