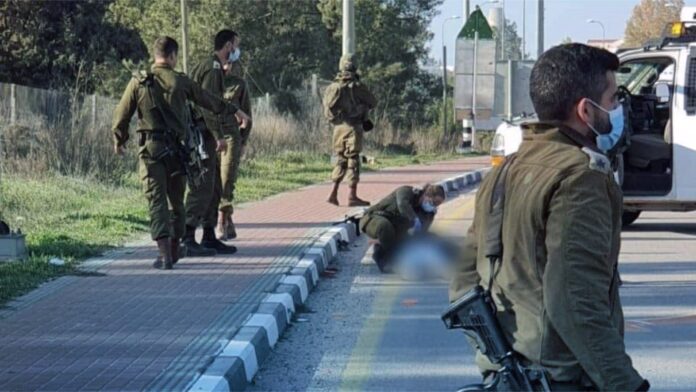 A Palestinian man on Tuesday tried to carry out a stabbing attack in the West Bank, amid rising violence in the area, the Israeli military said.

The Israel Defense Forces said the suspect was spotted by a settlement security coordinator as he approached the Gush Etzion junction, south of Bethlehem. The security official and an Israeli soldier ordered the suspect to stop and fired shots into the air, according to the military.

“The suspect threw a knife at the security coordinator, who responded with fire and neutralized the terrorist,” an IDF statement said.

No soldiers or civilians were injured.

Images from the scene showed the suspect lying immobilized on the ground, along with a meat cleaver he was apparently carrying.

The Palestinian Authority health ministry identified the suspect as Ahed Abd al-Rahman Qawqas, 25, from the nearby town of Beit Ummar.

The junction, in the southern West Bank, has been the scene of numerous attacks and attempted assaults over the years.

The incident came at a period of heightened tensions in the West Bank.

Last month, an Israeli woman, Esther Horgen, was found dead in a northern West Bank forest where she had gone for a run. Troops arrested the prime suspect in the murder, who was identified by the Shin Bet security service on Monday as a 40-year-old Palestinian man from a nearby village.

The Israeli security services reported 13 incidents of stone-throwing by settlers against Palestinians in the days immediately following Horgen’s murder. A 16-year-old settler, Ahuvia Sandak, was killed in a car crash during a police chase after allegedly hurling rocks.

Additionally, an unarmed Palestinian man, Haroun Abu Aram, was left paralyzed from the neck down on Friday after being shot at close range by Israeli forces during an operation to confiscate illegal Palestinian construction equipment in the West Bank’s South Hebron Hills.

On Sunday, an Israeli woman was seriously injured by rocks thrown at her car as she drove in the West Bank. The IDF later announced the arrests of several suspects.