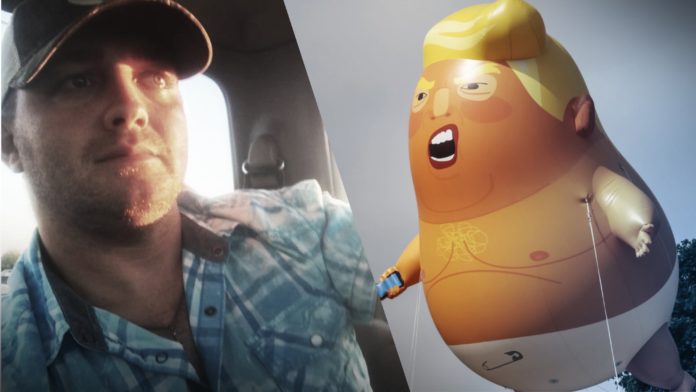 It’s safe to say that the Alabama “baby Trump” balloon-popper is not sorry for his actions.

Hoyt Deau Hutchinson, the man who was charged with slashing liberals’ anti-Trump balloon at a Tuscaloosa protest last weekend, went on the “Rick & Bubba Show” Monday to defend his actions.

Anti-Trumpers used the balloon at a gathering on Saturday to protest the president’s presence at the Alabama/LSU game.

“I was so fired up,” Hutchinson said. “I was shaking I was so mad.”

“I’m not young but I’m not old. I’m sort of middle-aged. I feel like a lot of people my age don’t keep up with the news and politics the way they should. I watch the news every night. I watch Fox News every night. Tucker Carlson and Sean Hannity are my favourite two anchors,” the Alabama man told host Rick Burgess.

“I see this stuff going on out west and up north and all other places,” he continued. “I get so mad about people not taking a stand.”

In Hutchinson’s view, taking a stand and popping the balloon was necessary, and even a moral good.

“The Left wants to use religion against you like you shouldn’t act like this and stuff but I’ll tell you this – the Devil knows the Bible as good as we do,” he said.

“This was your turning of the temple tables?” Burgess asked, referring to Jesus turning over the money changers’ tables in the temple.

“Yes,” the 32-year-old answered. “It comes a point when you gotta take a stand. We don’t have two parties anymore. We have good vs. evil.”

“When you got one party that says it’s OK to kill babies and by the way, this is the first time I’m ever seen a liberal get mad about chopping up a baby,” Hutchinson added, referring to Democrats’ push for abortion-on-demand until the moment of birth.

According to The Washington Examiner, the balloon used by the anti-Trump protesters on Saturday was an “orange, diaper-clad caricature of the president.” “Baby Trump,” which has become a favorite anti-Trump figure for the so-called #Resistance, is clutching a cell phone, presumably mocking the president’s frequent use of Twitter.

“The balloon measures over 20 feet (6.1 meters) tall and was left with an 8-foot-long (2.4-meter-long) gash in its backside” the outlet added.