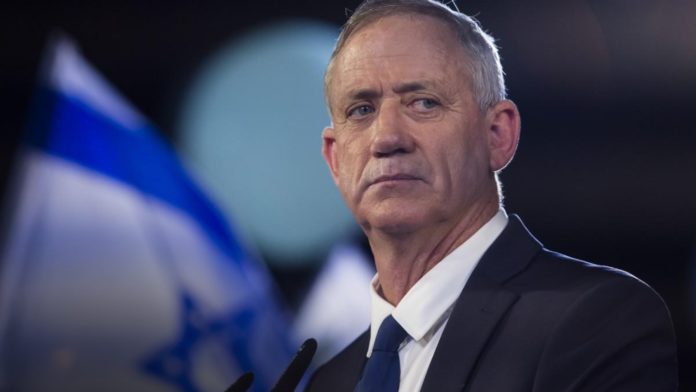 Likud leader Benjamin Netanyahu on Wednesday accused his rival Benny Gantz of seeking to undermine democracy and defy the will of the public after it emerged that the Blue and White party would seek legislation to bar him from serving as prime minister due to his upcoming trial.

“Gantz lost and now he’s trying to steal the election,” Netanyahu said at the start of a meeting of right-wing factions that support him, as a near-final tally of votes in Monday’s election showed his bloc at 58 seats, three short of the Knesset majority he craved. The bloc that opposes him has 62 seats.

Blue and White on Wednesday confirmed it was working on getting a majority to support a law that would prevent an indicted prime minister from serving, which would effectively oust the premier. Gantz proposed such a law after the September election, but it was struck down at the time by Yisrael Beytenu leader Avigdor Liberman. However, Liberman could support it this time, according to a senior source who has spoken with Liberman about the matter, placing Netanyahu on the defensive.

“The people’s will is clear. The national Zionist camp includes 58 seats. The leftist Zionist camp includes 47 seats,” Netanyahu said, including Yisrael Beytenu as part of the left, but leaving out the predominantly Arab Joint List and its apparent 15 seats. “The Joint List, which attacks our soldiers and opposes the State of Israel, is not part of the equation,” he said.

“That is the will of the people. That is what the people decided… the public gave me more votes than any other candidate in Knesset elections in the history of the country.”

The premier said Blue and White’s plan to seek legislation that would ban him from leadership “undermines the foundations of democracy and the will of the voters. We repeatedly warned during the election that Gantz was partnering with terror supporters in [the Joint List] in an attempt to negate the will of the public.”

He added: “My friends and I, and millions of citizens who supported us, will not let that happen.”

Defense Minister and Yamina party chief Naftali Bennett expressed support for Netanyahu while also accusing Gantz of “trying to steal the clear victory of the right.”

Gantz issued a laconic response on Twitter: “Bibi, drink a glass of water, wait for the final results, and promise to accept them,” he wrote, using the prime minister’s nickname.

The tweet was a jab at a Likud statement, days before the election, when it advised Gantz to “calm down [and] drink a glass of water” after he accused Netanyahu of lying and inciting against him in campaign ads.

Meanwhile the head of the Joint List, MK Ayman Odeh, tweeted: “Netanyahu wouldn’t recognize democracy if it filed three indictments against him and prevented him from forming a government for a third time.”

Knesset legal adviser Eyal Yinon on Wednesday said no legislation could be passed until a new parliament is sworn in. But Blue and White is reportedly planning to file the draft law only after the new Knesset is sworn in on March 16.

After more than 99 percent of the votes were tallied, Likud and its allies had 58 seats combined. The right-wing religious bloc supporting Netanyahu — consisting of Likud, Shas, UTJ and Yamina — thus fell short of the 61 seats needed to form a government, and its rivals seem certain to hold a majority in the next Knesset.

While the combination of the centrist Blue and White, the right-wing secularist Yisrael Beytenu, the left-wing Labor-Gesher-Meretz and the predominantly Arab Joint List — which together have a majority in the parliament — have virtually no chance of coming together to form a government, what they do have in common is opposition to Netanyahu’s continued rule.

Monday’s election was largely seen as a referendum on Netanyahu, who will go on trial in two weeks for bribery, fraud and breach of trust but is thought to be seeking support for a legislative mechanism to grant him immunity.

A similar law to the one being pushed by Blue and White, that would have ousted a premier facing an indictment, was supported by Netanyahu himself in 2008, when Ehud Olmert was facing corruption charges, Hebrew-language media reported. The law didn’t pass, but Olmert resigned before the charges were filed.

It wasn’t immediately clear whether the plan to pass a law barring a person facing criminal charges from serving as prime minister was technically possible to implement, with some observers arguing that private, non-governmental draft laws cannot be filed during a transitional government.

Blue and White is apparently convinced it is possible, and that it isn’t different from Likud proposing a law to dissolve the Knesset and call new elections, which was voted on and passed.

Apart from Blue and White, senior members of Labor-Gesher-Meretz and the Joint List on Wednesday voiced support for the law, while Yisrael Beytenu officially kept mum.

But a senior Yisrael Beytenu official familiar with internal deliberations told Zman Yisrael, The Times of Israel’s Hebrew-language sister site, that Liberman and his party would support the law.

The official expressed hope that the law would make a unity government possible, since Blue and White and Yisrael Beytenu say they are willing to join politically with Likud, but not with Netanyahu at its head.

Members of Netanyahu’s bloc reacted with outrage to the initiative.

Bennett on Twitter called it “an anti-democratic move, spitting in the face of half the country.”

Shas leader Aryeh Deri said such a law would be a “disgrace” and break the “rules of the political game.” He lambasted Blue and White for being “willing to sacrifice the benefit of the country and the people’s unity on the altar of personal hate toward Netanyahu.”