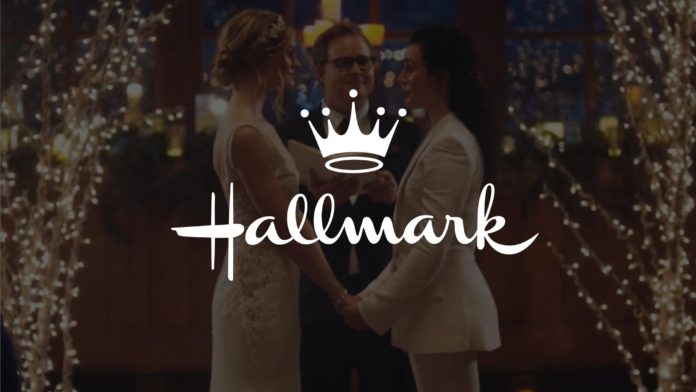 The Hallmark Channel announced Dec. 15 that it will reinstate four LGBTQ-themed commercials after coming under fire from celebrities, politicians and homosexual advocates for its previous decision to pull the ads from its programming.

Six ads for the wedding planning site Zola were submitted to be aired on the typically family-friendly network—with four of the ads featuring a lesbian couple. After an outcry from viewers, Hallmark announced it was pulling the ads, only to reverse course.

“It only took two days, but Hallmark just caved in to the LGBT agenda and the homosexual lobby,” wrote LifeSite News.

“We can change the channel,” Franklin Graham posted on Facebook. “That’s what I’ll do if I’m watching the Hallmark Channel and an ad with gay people kissing comes on. My family has enjoyed this channel for years. We—and millions of others—have appreciated their wholesome content that was unlike so much of what is on television today. But the LGBTQ agenda bullies everybody—including the Hallmark Channel. The Hallmark Channel aired an ad from a wedding planning company showing a lesbian couple kissing, then they pulled it after their conservative base shared concerns. Now they’ve announced that they’re reinstating the ad and will again be airing it and others like it. That’s a shame. Let the Hallmark Channel USA know how you feel about this type of content on their channel.”

The conservative group One Million Moms, part of the American Family Association, condemned Hallmark’s original decision to air the commercials.

“Family entertainment is not the outlet in which to be politically correct by forcing tolerance and acceptance of homosexuality—a sinful lifestyle that Scripture clearly deems as wrong. You can read so in Romans 1:18-32,” reads a petition generated by the group, which garnered over 26,000 signatures. “One Million Moms is asking Hallmark to stay true to its family-friendly roots that so many families have grown to love, and to keep sex and sexual content—including the promotion of homosexuality—out of its programming.”

A separate petition by LifeSite News accumulated more than 42,000 signatures.

One Million Moms later reached out to Bill Abbott, CEO of Crown Media Family Networks, Hallmark’s parent company. Abbott allegedly told the group that the advertisements “aired in error” and assured the group that the offensive content would be pulled.

The decision quickly drew the ire of LGBTQ supporters, including well-known names like Ellen DeGeneres, William Shatner and Pete Buttigieg. And at one point, #BoycottHallmark was trending on Twitter.

LGBTQ advocacy group GLAAD called Hallmark’s initial decision to remove the ads “discriminatory” and threatened to approach other Hallmark advertisers and encourage them to pull their advertising from the channel.

Hallmark quickly succumbed to the criticism and reneged on their promise to conservatives.

“The Crown Media team has been agonizing over this decision as we’ve seen the hurt it has unintentionally caused,” said Hallmark Cards CEO Mike Perry. “Said simply, they believe [pulling the ads] was the wrong decision. Our mission is rooted in helping all people connect, celebrate traditions and be inspired to capture meaningful moments in their lives. Anything that detracts from this purpose is not who we are. We are truly sorry for the hurt and disappointment this has caused.”

Hallmark has vowed to work with GLAAD to better represent the LGBTQ community and reach out to Zola to reestablish its advertising partnership.

But while the network claims to want to be more “inclusive,” conservatives feel left out in the cold.

“Hallmark risk[s] losing a big part of [its] market,” warned LifeSite. “And Hallmark should know that if they give in to the LGBT agenda, the LGBT activists will never be satisfied. They will always want Hallmark to be pushing more and more aberrant views and characters. We call on Hallmark to reflect on who [its] core market actually represents, and to step away from the LGBT agenda before it’s too late.”

Ironically, Hallmark is now facing calls for a boycott by conservatives.