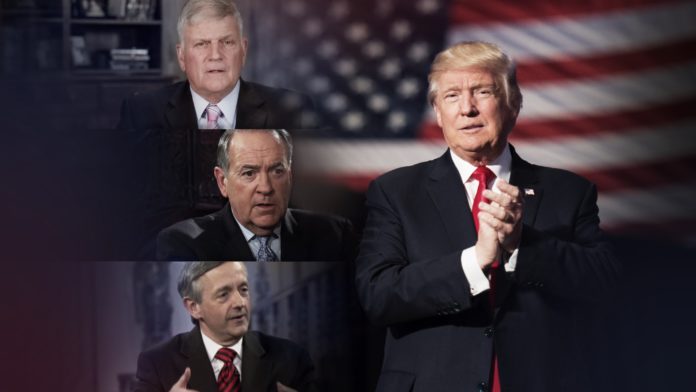 In a special Fox Nation presentation Thursday, host Todd Starnes kept the peace while tossing heated questions at an expert panel of politicians, citizen activists, and Christian leaders about how religious freedom, education and politics is impacting the culture – and how to prevent what each believes will be the demise of America if its people do not rise up and push back.

Joining Starnes in the studio and on the air to talk about issues he explores in his new book, Culture Jihad: How to Stop the Left from Killing a Nation, were Franklin Graham, head of the Billy Graham Evangelistic Association and Samaritan’s Purse; Mike Huckabee, former governor of Arkansas; Robert Jeffress, senior pastor, First Baptist Church, Dallas; Elizabeth Johnston, the activist mommy and author of Not on My Watch; Robert Jeffress, senior pastor, First Baptist Church, Dallas; and Debbie D’Souza, a Venezuelan-born anti-socialist married to Dinish D’Souza, an American political filmmaker and author.

“America is at a crossroads, socialism is on the rise, the Bill of Rights under assault, [and] people of faith are facing persecution,” Starnes told listeners in the 30-minute program, taking them on a deep dive into issues his book confronts. “Gun owners are in the crosshairs. Our borders have been breached and our public schools have been turned into indoctrination centers.

“A leftist mob made up of socialist politicians, academic elites, raging feminists and basement dwelling pajama boys have partnered with Antifa, illegal aliens and other radical groups to finish what President Obama started, a fundamental transformation of our nation.”

Graham, on the air, agreed. President Trump is doing “a terrific job” standing up for religious freedom, Graham said, but it’s time for Christians and other people of faith to vote for politicians and school board members, in particular, who stand for American values.

Johnston, whom Starnes described as “a pit bull on a pork chop” when it comes to tackling tough issues, said she agreed with Graham that running for local school boards is an important part of halting “culture jihad.”

Too much time is spent on questioning the gender of boys or girls at school, Johnston said, and because of “absolutely radical leftist indoctrination and propaganda that I think the basics of reading, writing and arithmetic are going completely untaught.”

Weighing in on the air, Huckabee told Starnes his book has “struck a nerve” and that “culture jihad” is what is happening in America today.

Jeffress warned the upcoming election is no place for “wimpy Christians who won’t stand up.”

“The soul of our nation is at stake right now,” Jeffress said. “I believe that if the left ever seizes control of the White House again and both chambers of Congress, it is not going to be incremental change, it is going to be radical change.”

Wondering aloud, Starnes added perhaps the “dumbing down of American young people,” as evidenced by a move to eliminate New York’s gifted and talented programs, is a move to produce an easy-to-control “stupid populace.”

D’Souza pointed to the breakup of families and kids who are easily indoctrinated throughout elementary school and into college.

“So talk to your children. Talk to a neighbor that has a kid. Tell them that socialism is not cool. Socialism is a bad thing for society,” she said. “Who is going to be our lifeline? How are we going to survive if we become a socialist country?”

In a final “call to arms,” Starnes reminded his “happy warriors” they are, despite “a few sucker punches,” still in the fight – because they are Americans.

“On election day in 2020 do we cling to freedom and liberty or do we surrender to the secularists and socialists?” he asked. “Do we stand up for the First Amendment or do we allow ourselves to be silenced? Do we defend the Right to Bear Arms? Do we stand up for the unborn, or do we turn a blind eye to a modern-day genocide?

“The culture jihadists want to destroy the American family. The sex and gender revolutionaries want to redefine what God defined. The secularists want to evict Christians from the public marketplace,” Starnes continued. “So we must be men and women of courage. It is imperative that gun toting, Bible-clinging patriots rise up and with a mighty voice declare that this great American is worth saving.”