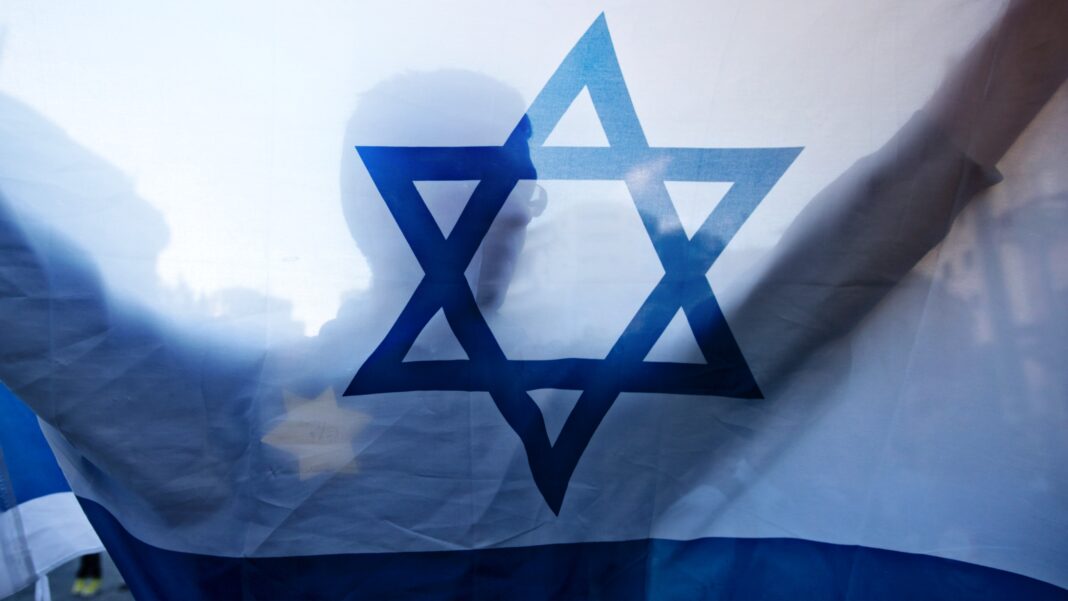 German police in the city of Frankfurt have launched an investigation against an Israeli musician and may press charges against her after she waved the Israeli flag at an anti-Israel demonstration that was organized by a pro-BDS group in July.

Israeli author Chaim Noll wrote on Friday on the popular German website “The Axis of Good” that criminal proceedings could be initiated against Ana Agre, an Israeli musician who works in Germany.

Noll wrote that on July 1 this year, Agre ran into an anti-Israel demonstration near her home that was arranged by the pro-Palestinian organization, Samidoun. She went up to her apartment to fetch an Israeli flag which was about the size of a kitchen towel and returned to the square where the protesters were marching together with their German supporters.

Samidoun seeks to secure the release of convicted Palestinian terrorists from Israeli prisons and supports the Boycott, Divestment and Sanctions (BDS) campaign against Israel.

Noll reported that a Frankfurt police officer addressed Agre in English, recorded her identity and advised her to leave because her presence was “provocative to the young Muslims.”

He added that “Ana obviously entered into a discussion with the police officer, in English, but he ended the conversation by ordering her to leave. When she asked him why, here in Frankfurt, she was not allowed to display the Israeli flag, the officer responded: ‘Because I don’t like it.’”

Noll wrote that several march participants approached Agre and confronted her with slogans, including “Nazis out.”

“In the minds of those young Muslims and their German supporters, an Israeli flag is apparently a Nazi symbol,” Noll wrote.

He said Agre had received a summons in the mail a few days later ordering her to appear at Frankfurt criminal police headquarters on October 7 to make a statement, citing an “offense according to Criminal Code, paragraph 185.”

Failure to appear at the station without good cause would result in the matter being passed on to the “law enforcement agency in charge,” the summons, signed by officer J. Schmidt said.

German-born Noll, who made aliyah in 1995, is a prolific author of books, essays, articles and poems.

Frankfurt police issued a statement on Monday in response to The Jerusalem Post article that “a 50-year-old woman appeared [at the anti-Israel demonstration] and waved the flag of Israel in the direction of the demonstrators who were still there. She held up her middle finger to a 29-year-old demonstrator… [and] the participant filed a criminal complaint on-site for insult.”

It added that the police were obliged to respond and “subsequently established the personal details of all those involved and of witnesses. The police then expelled the 50-year-old to prevent further provocations and possible arguments.”

The statement did not address Agre’s allegations that she was called a “Nazi” and the police official who said he disliked her Israeli flag. It was also unclear how the Israeli flag signified a provocation for the police.

Frankfurt, in the state of Hesse, and is the electoral district of controversial German Green Party MP Omid Nouripour, who is on the advisory board of the German Palestinian Society, a pro-BDS group that has called for Israel to be dismantled. Nouripour declined to answer a Post query about Agre’s case.

German-Iranian dissidents have accused him of stoking racism and antisemitism.

The actual reason is the Jewish people are the “Chosen People of God.” God hand-selected the seed of Abraham, Isaac and Jacob to be the line of the saviour that will bless the world and defeat Satan.

This satanic hatred of the Jews is nothing new; in fact, it is the fulfillment of one of the oldest Bible Prophecies. Satan has tried to foil God’s plan by attempting and failing to wipe out the Jewish people for thousands of years and will try again through the Anti-Christ, where he will yet again fail. (See Revelation 12)