Franklin Graham: The Hope of Christ in the COVID-19 Crisis 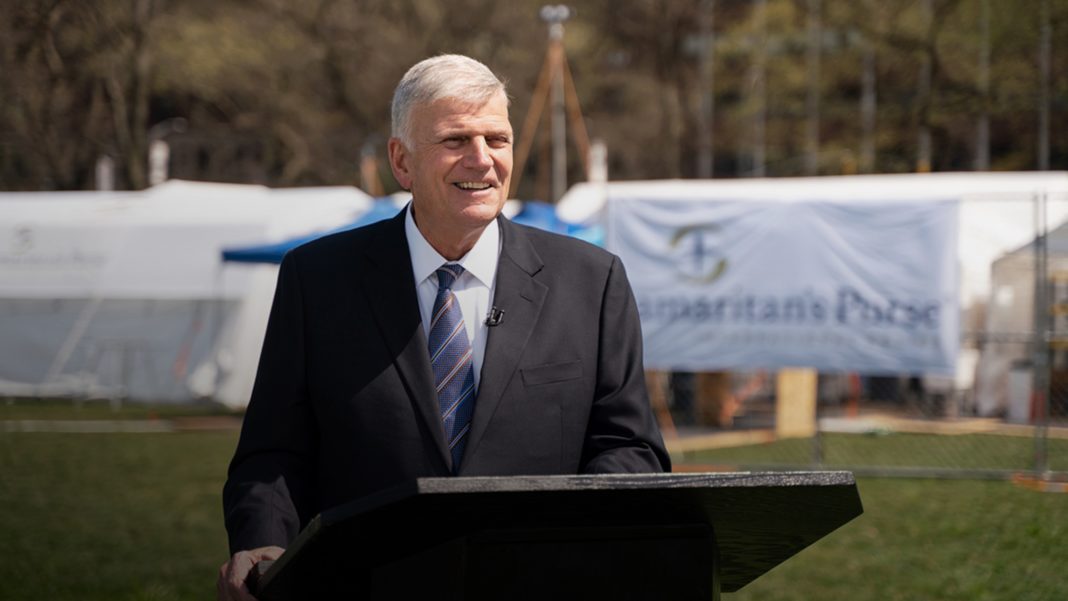 Hospitals have been overwhelmed as they’ve cared for the gravely ill. Health care workers have put their lives on the line and have been working around-the-clock to save lives. President Donald Trump, Vice President Mike Pence and members of the White House Coronavirus Task Force are doing everything they can to alleviate shortages of ventilators and personal protective equipment. The disease has spared no one—statesmen, athletes, actors, musicians, rich and poor.

The global economy has suffered a major setback. Tens of millions of people have been laid off or furloughed from their jobs as nation after nation has mandated shelter-in-place ordinances, shutting down—perhaps permanently—a vast number of businesses.

Virtually every public gathering worldwide has been banned, as social distancing has become the new reality. There are no more sporting events, no theaters, no live concerts. Funerals have been postponed. Restaurants and malls have been shuttered. Most churches have moved their worship services online.

The world has never seen anything like this. The panic, fear and uncertainty swept across the globe like a tsunami.

But in the midst of the fear, I believe that this horrible disease has caused the Gospel of our Lord Jesus Christ to shine in the darkness. This outbreak has stripped away many of the idols that we have accumulated in our culture—sports, entertainment, wealth and a false sense of earthly security.

Officials requested that Samaritan’s Purse, which I also lead, set up our Emergency Field Hospitals in two epicenters of the pandemic—New York City and the Lombardy province of northern Italy. These were the worst hot spots once the virus spilled out of China, and thousands suddenly fell ill and died tragically, gasping for breath.

In the city of Cremona, Italy, Samaritan’s Purse set up in the parking lot of the main hospital, which was so overwhelmed that 40 health care workers were fatally infected as they worked to save lives. In New York City, we set up in the East Meadow of Central Park, at 98th Street and Fifth Avenue, across the street from Mount Sinai Hospital, which had graciously invited us to work in partnership with them. Our tents are barely a mile from the Main Lawn of Central Park, where my father preached to huge crowds in 1991.

Every day, chaplains from the Billy Graham Evangelistic Association’s Rapid Response Team are praying and sharing the hope of Christ with people in our ministry tent and with first responders and others outside the perimeter of the hospital. The chaplains also pray with any patient who asks.

Early in the outbreak, I read stories about patients who were dying, but because the virus was so contagious, they had to be isolated from their families and had no one to pray with them or comfort them. It has been our prayer that everyone who enters our hospitals will be able to walk out, but we make sure that if anyone is beyond medical treatment, they will not die alone. In Italy, we’ve seen several patients trust Christ as their Savior while our doctors and nurses brought them back to health.

It was an incredible privilege for me to be able to stand in front of our Central Park hospital and preach the Gospel for an Easter Sunday broadcast to a nationwide audience on Fox News. I proclaimed the glorious truth that Christ died on a cross for our sins, was buried, and on the third day rose from the dead—never to die again. “For God so loved the world, that he gave his only begotten Son, that whosoever believeth in him should not perish, but have everlasting life” (John 3:16, KJV).

As horrific as this pandemic has been, and the staggering toll it has taken on the world, there is a much more horrible disease that has infected mankind—sin. All of us are born as sinners, and that sin has separated us from a holy God. Without repentance and faith in the sin-bearing work of Christ on the cross, we are doomed to eternal separation from God—hell. “He who believes in the Son has everlasting life; and he who does not believe the Son shall not see life, but the wrath of God abides on him” (John 3:36).

This virus makes no distinction between people. It can kill Republicans, Democrats and Independents alike. There are only two categories with God, the godly and the ungodly, the just and the unjust. How eternally grateful we should all be that our glorious Savior has made it possible that everyone who “believes on Him who justifies the ungodly, his faith is accounted for righteousness”! (Romans 4:5).

In the midst of the pandemic, BGEA opened a 24-hour COVID-19 prayer hotline, and the results have been incredible. As of press time, we have received more than 65,000 calls, and many have come to know Christ as their Lord and Savior as dedicated believers have shared the Gospel with them. We have had calls from people who dialed in with the sole mission of verbally abusing our phone operators—only to be broken by the Spirit of God and surrender their hearts to Christ moments later. We give God all the praise and glory for how He has so powerfully worked!

I’ve had many people ask me in the past few months why God has allowed such suffering from this coronavirus.

God certainly allows suffering, but that comes fundamentally from the sin and rebellion of mankind. Adam and Eve turned their backs on God in the Garden of Eden, and as a result sin and death came into the world. God sent Jesus not to condemn the world, “but that the world through Him might be saved” (John 3:17). One day, when Christ returns, the Lord will wipe away every tear; and sin, suffering and death will be no more in the New Heaven and the New Earth. All will be made right.

I’ve also been asked whether all of this is a sign that the Lord may be returning soon. Of course, there have been many wars, diseases and pestilences in bygone centuries and millennia.

I can’t give an answer to that, because the Scripture says that no one but the Father in Heaven knows when that will occur. “But of that day and hour no one knows, not even the angels of heaven, but My Father only. … Watch therefore, for you do not know what hour your Lord is coming. … Therefore you also be ready, for the Son of Man is coming at an hour you do not expect” (Matthew 24:36, 42, 44).

Rather than speculate on the day and hour, the Bible tells us to focus on watching, praying and working until our Lord does come. That’s what we’re doing here at the Billy Graham Evangelistic Association—working in His Name around the world, lifting up the Name of Jesus wherever we go.

Relying fully on the power of the Holy Spirit, we will preach and proclaim the Gospel of the Lord Jesus Christ each and every day, and we pray, “Even so, come, Lord Jesus!” (Revelation 22:20).