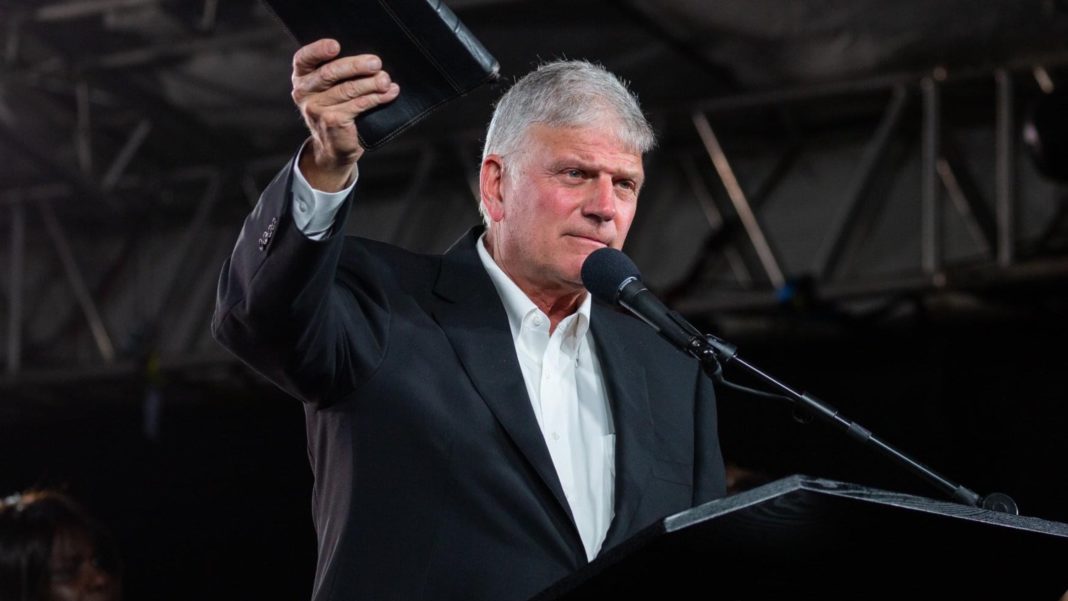 Two years ago, we held an evangelistic Crusade in the seaside town of Blackpool, England. Nine thousand people came to hear us proclaim the Gospel of the Lord Jesus Christ. Hundreds made confessions of faith!

This was in spite of intense opposition from the LGBTQ community, which objected to the advertising message on public transportation buses. The ads simply said “Time for Hope.” The gay activists were successful at the time in pressuring officials to remove our ads from the sides of the buses.

However, the Billy Graham Evangelistic Association coordinated with the Lancashire Festival trustees to take the matter to court to protect the freedoms of Christians to express their sincerely held beliefs.

Two years later, I’m pleased to say that the court ruled overwhelmingly in our favor.

Presiding Judge Claire Evans ruled that the town and transit company discriminated against the Festival because of BGEA’s beliefs.

Even though it took two years to reach this verdict, I thank God for the ruling because it is a win for every Christian in the U.K. And it is most definitely a rebuke of the prevalent cancel culture.

As I write, the specter of discrimination against people of faith in our own country has been raised in the halls of Congress as they debate the Equality Act and H.R. 1, a bill that has been termed the “For the People Act.’’

Neither is what it seems. Both will do serious damage to the free expression of our faith in Christ in so many ways.

The Equality Act supposedly seeks to protect the rights of transgender and gay people, but in doing so it tramples on the rights of Christians and faith-based organizations to live and work by their Biblically based convictions. If passed, it would be a serious blow to religious freedom as we have known it.

And the For the People Act is anything but that and poses yet more possible harm to Christians and the nation as a whole. It essentially strips states of the power to manage their own elections. And it calls for the creation of redistricting commissions that could bar or disqualify individuals from serving on these bodies because of their involvement in churches and charitable ministries. One observer has written that “it would be a religious test” for those who desire to serve, and thus be blatantly unconstitutional.

Of course, under the current president, there are numerous other threats on the horizon for Christians as several of the newly appointed cabinet members and staff have been hostile toward Christian schools, pro-life groups and Christian organizations.

Our nation has slowly and steadily drifted away from God—perhaps even turned our back on God in so many ways—and we are now reaping the devastating consequences. I believe we have come to the perilous point described at the end of the Book of Judges, where “everyone did what was right in his own eyes” (Judges 21:25).

I saw a poster recently that said, “Truth sounds like hate to those who hate the Truth.”

Those who accuse believers in the Lord Jesus Christ of hate speech when they speak about abortion and the sanctity of marriage between one man and one woman are those who hate God’s truth.

At the root of such a contempt is an absolute rejection of the authority of God’s Word. The Apostle Paul, writing to the Thessalonians, described those who are perishing spiritually in this way: They perish “because they did not receive the love of the truth, that they might be saved. And for this reason God will send them strong delusion, that they should believe the lie” (2 Thessalonians 2:10-11).

The Scripture is God’s revelation to man, and it stands as the absolute, unrivaled authority over every domain of life. “All Scripture is given by inspiration of God, and is profitable for doctrine, for reproof, for correction, for instruction in righteousness” (2 Timothy 3:16).

When the Bible speaks about creation, it says, “In the beginning God created the heavens and the earth” (Genesis 1:1) and He is “upholding all things by the word of His power” (Hebrews 1:3).

While a godless culture seeks to radically redefine moral norms and force them upon a nation, the Bible alone is the absolute standard of eternal truth for every person in every age. “The grass withers, the flower fades, but the word of our God stands forever” (Isaiah 40:8).

You can argue all you want, you can try and deny the Truth all you want, but God’s Word is the final arbiter. The great British preacher Charles Spurgeon said, “I believe certain doctrines because God says they are true; and the only authority I have for their truth is the Word of God.”

The only hope for a nation that continues to further distance itself from the anchor of God’s truth is a repentance from sin and a saving faith in the Lord Jesus Christ, who gave Himself for our sins that we might be forgiven and receive the gift of everlasting life.

Once we do that, all of life comes under the Lordship of Christ, and we order our ways before Him to walk in truth and holiness.

I am grateful for the outcome of the Blackpool case before the judge in England. Please pray for several similar cases that we still have pending there, and for the judges who will hear them. But far more important is that we stand before the Judge of the living and the dead one day and hear “Well done, good and faithful servant … enter into the joy of your Lord” (Matthew 25:21).