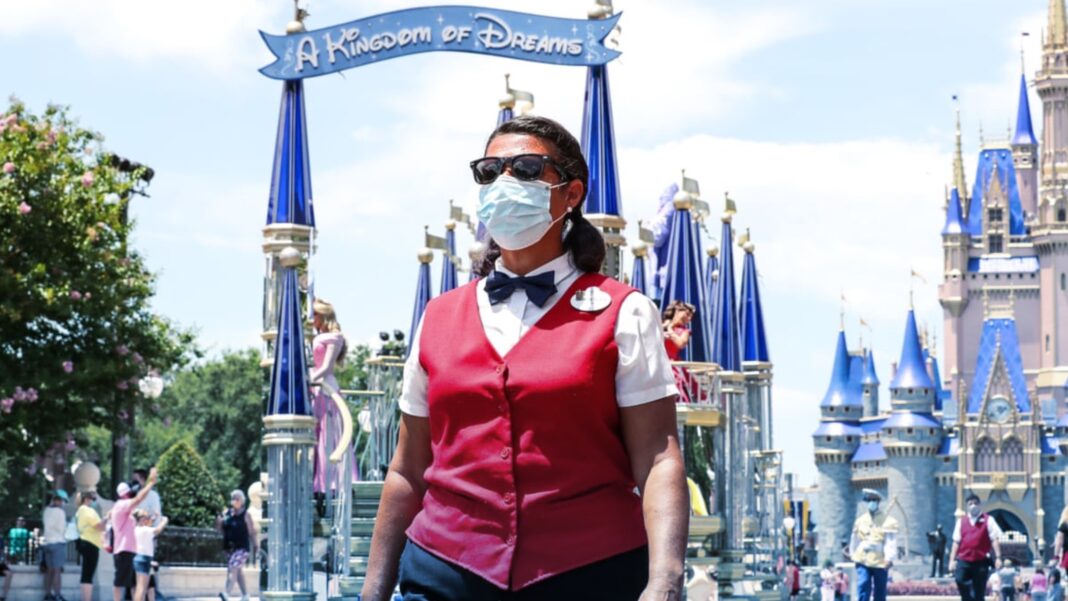 Disney, which owns ABC, ESPN, Touchstone Pictures, Marvel, Lucasfilm, and other major media companies, instructed employees to “take ownership of educating yourself about structural anti-Black racism” as well as “not rely on your Black colleagues to educate you,” which would be “emotionally taxing.”

“When America’s storied places of joy and refuge from the cares of the world turn themselves into partisan actors and political indoctrination factories, the harm to our social fabric is immeasurable,” Stanley Kurtz, a senior fellow at the Ethics and Public Policy Center, told The Federalist. “Disney is dividing the country it once helped to inspire, inviting entirely justified blowback from the vast number of Americans it now derogates, disregards, and caricatures. I thought politicized baseball was the unkindest cut of all, but now this. As Disney and other woke corporations plunge America into the bitterest cultural conflict in memory, they deserve to feel shame, not pride.”

The  training modules centralize the notion of “anti-racism” — the idea that Americans must acknowledge their country is systemically racist and eradicate any semblance of a colorblind society. The company told employees they must also “work through feelings of guilt, shame, and defensiveness to understand what is beneath them and what needs to be healed,” harping on the notion of implicit bias. The phrase “All Lives Matter” was communicated as derogatory, and so was the phrase “I don’t see color.”

One module in the training titled “What Can I Do About Racism?” instructed staff to denounce the idea of “equality” and instead favor “equity.” The corporation crafted a “21-Day Racial Equity and Social Justice Challenge” that was followed by a “white privilege checklist.” The checklist claims a variety of statements, if affirmed, indicate a person’s “privilege.” This includes some of the following statements:

Below is the full document Rufo obtained from a Disney whistleblower:

In addition to other modules, employees were provided several outside resources. This included a guide titled “75 Things White People Can Do For Racial Justice” that claims readers should support “defund[ing] the police” and “decolonize your bookshelf.”

The guide also claims employees should read The New York Times’s inaccurate and divisive “1619 Project” by Nikole Hannah-Jones. Streaming service Hulu, owned by Disney, is streaming a docuseries on Hannah-Jones’s work. The company described the “1619 Project” as “a landmark undertaking …of the brutal racism that endures in so many aspects of American life today.”

Dr. James A. Lindsay, the founder of New Discourses and the author of “Cynical Theories: How Activist Scholarship Made Everything about Race, Gender, and Identity—and Why This Harms Everybody,” told The Federalist that Americans “have to stop being shocked” about critical race theory trainings.

“This is happening pretty much everywhere,” Lindsay said. “What’s happening at Disney, while it looks very extreme, is actually quite typical. We see almost exactly the same kinds of things playing out in terms of what these trainings are made up of and what they include. The picture that has to come across somehow is these aren’t isolated incidents. This is government agencies. This is churches. This is virtually every university. This is many if not most school districts.”

Further dividing its employees by race and sex, Disney crafted “affinity groups” for minority employees to join. The groups are titled “Hola” for latino individuals, “Compass” for asians, and “Wakanda” for blacks. The objective of the groups is to provide “culturally-authentic insights” for employees and encourage “diversity,” “inclusion,” “belonging,” “identity,” and “allyship.” There is no group provided for all individuals to join.

Employees told Rufo the corporation sends “almost daily memos” on such issues and that Disney is “completely ideologically one-sided.” Numerous employees concurred and one claimed the corporate environment is “very stifled.”

“It’s been very stifling to feel like everyone keeps talking about having open dialogue and compassionate conversations, but when it comes down to it, I know if I said one thing that was truthful, based on data, or even just based on my own personal experience, it would actually be rather unwelcomed,” a Christian and conservative employee said.

In a video obtained by Rufo, Executive Chairman Bob Iger allegedly said Disney will not “shy away from politics” and “should be taking a stand” on identity politics issues. Iger also allegedly said the films “Dumbo,” “Aladdin,” and “Fantasia” are “racist content.” The company fired “The Mandalorian” actress Gina Carano in February for not displaying allegiance to identity politics while continuing to do business with a genocidal Communist China.