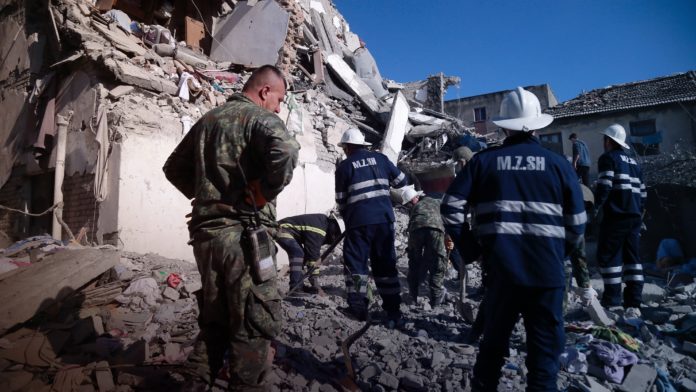 SOURCE: (The Globe and Mail)

Rescue crews with excavators searched for survivors trapped in toppled apartment buildings and hotels Tuesday as the death toll from a powerful pre-dawn earthquake in Albania climbed to 21, with more than 600 people injured.

The magnitude-6.4 quake was felt across the southern Balkans and was followed by multiple aftershocks, with several above magnitude 5. In nearby Bosnia, another temblor with a preliminary magnitude of 5.4 struck southeast of the capital Sarajevo, causing only minor damage.

The quake in Albania knocked down apartment buildings and hotels while people slept, and rescue crews worked into the evening to free more people believed trapped. There was no indication as to how many might still be buried in the rubble, as neighbouring countries and European Union nations sent search-and-rescue crews to help.

The government declared an official day of mourning for Wednesday, with Albanian flags on official buildings to fly at half-staff. Schools would remain closed until Monday, as Thursday and Friday were national holidays. The country’s soccer federation announced all matches would be cancelled for the rest of the week.

Local television stations showed footage in the early hours after the quake of a young boy being rescued from a collapsed building in the coastal town of Durres, 33 kilometres (20 miles) west of the capital Tirana and one of the worst-hit areas. An excavator moved a broken slab of concrete and the boy cried and shouted in pain as local men pulled mangled reinforcement bars out of the way trying to try to free his leg from the rubble.

Hours later, live TV footage showed people cheering as another child was found alive in a collapsed building in Durres where a body had been located earlier. In total, 43 people had been rescued from the rubble of buildings by Tuesday evening.

Health Minister Ogerta Manastirliu said more than 600 people had been treated for injuries, including nine hospitalized with life-threatening injuries.

“It is a dramatic moment where we should preserve calm, (and) stay alongside each other to cope with this shock,” Prime Minister Edi Rama said. He later visited Durres, where 12 people died, and the northern town of Thumane where another seven people were killed by a collapsing apartment building. One person died after jumping from his home to escape in Kurbin, 50 kilometres (30 miles) north of Tirana, while another was killed on a road that collapsed in the northern town of Lezha.

In Thumane, one woman cried and begged Rama to help find her missing daughter-in-law. Rama embraced the woman and tried to console her.

In Durres, the Albanian prime minister was accompanied by Greek Foreign Minister Nikos Dendias, who had been visiting neighbouring North Macedonia earlier in the day.

“We have been through this, we know this, we will do whatever we can to help,” said Dendias, whose country is also in a highly seismically active region and was among more than a dozen countries sending search-and-rescue teams to Albania. “We stand with the Albanian people, with its government, to offer whatever we can.”

Defence Minister Olta Xhacka said the search-and-rescue efforts were “extremely difficult operations, where you have to work slowly because there is a high risk of further collapse, endangering not only residents, but also those trapped, and the rescuers themselves.”

About 400 soldiers set up some 200 tents in Durres and in Fushe Kruje near Thumane in the north to house survivors left homeless by the quake.

As night fell, hundreds of people were taking shelter in the tents, while others were travelling to relatives living in other parts of Albania that had not been affected.

“Damage at the epicentre will be considerable because of its high energy, the magnitude it has,” Ormeni said. “Such quakes are felt in a wider area due to (their) major depth and magnitude. It has been felt all around the territory of our country but also abroad, up to Bulgaria, Bosnia, Italy and other (countries).”

Authorities called on people in the most affected areas to stay out of their homes and avoid driving to allow emergency vehicles free access.

An earthquake in September in roughly the same area damaged hundreds of homes.