Thousands Nationwide Take To Streets In Cuba Against Communism: This Is What Socialism Breeds 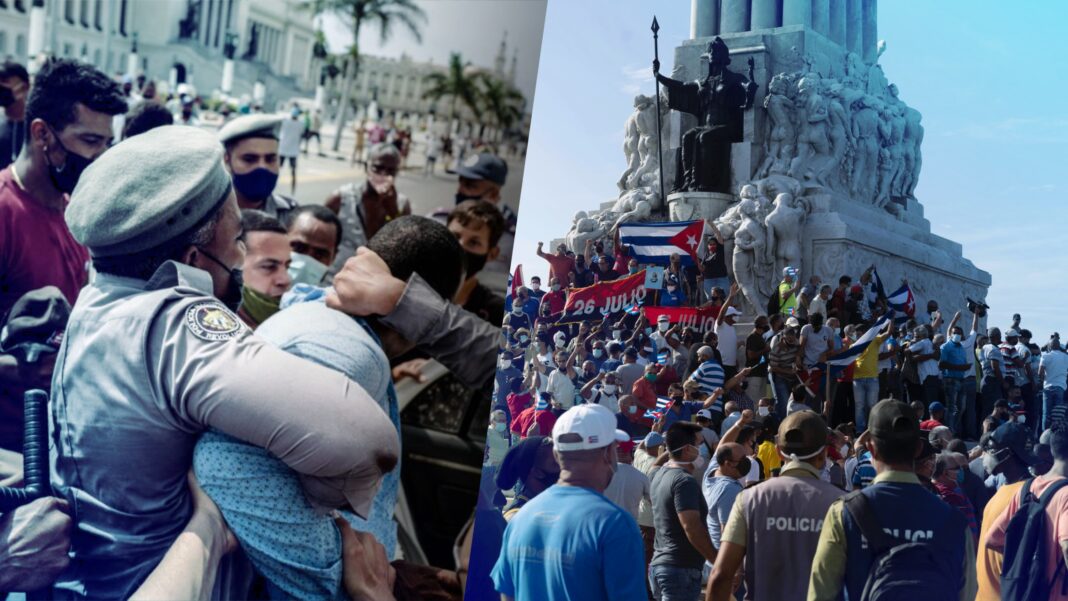 Thousands of Cubans in at least 16 cities took the streets peacefully on Sunday to demand an end to the 62-year-old communist regime, chanting “freedom,” wearing American flags, and in many cases facing extreme police repression.

Videos from throughout the island show both plain-clothed and uniformed state security officers attacking peaceful protesters. In Havana, bystanders recorded the sound of heavy gunfire and public beatings of dissidents. Miguel Díaz-Canel, the “president” appointed by Raúl Castro to be the face of the still-ruling Castro Communist Party, called for street “combat” against anyone demanding an end to the regime in a speech on Sunday.

The protests appeared to begin in the town of San Antonio de los Baños, western Cuba, on Sunday morning. Local independent outlets documented chants of “down with communism!”, “they [the regime] must leave,” and “f*** Díaz-Canel!”, among other anti-government statements. Locals livestreamed the protest on Facebook, triggering an outpouring into the streets of at least 16 major cities including both Havana and Santiago de Cuba, on opposite ends of the island.

The geographically widespread nature of the protests and the secrecy of the Communist Party on the island has made it virtually impossible to estimate exactly how many Cubans took the streets on Sunday. Police have not released any arrest totals or injury statistics, but some local outlets estimate that hundreds were arrested, taken into police stations but not formally charged or appearing in any law enforcement documentation. Among the arrested were several Cuban journalists not participating but reporting on the protests, according to the dissident news service Cubanet. Also arrested on Sunday, though rapidly released, was Yomil Hidalgo, one of Cuba’s most popular dance music artists.

The American flag, popularized as a protest symbol in Cuba by dissident Daniel Llorente, made multiple appearances among Cubans on Sunday. Video authenticated by the Miami broadcaster AméricaTeve showed a group of Cubans carrying an American flag through the streets of Havana on Sunday while chanting “freedom!” Videos taken by Cubans on social media and distributed through other Latin American news organizations also show the presence of the U.S. flag.

Under communism, the regime has outlawed most religious practices it cannot control and regularly persecutes Christians who defy its authority. Fidel Castro sent non-Catholic Christians to labor camps alongside suspected LGBT people, writers and critics, and other “undesirables” in the 1960s.

Reports of the beating and arrest of at least one Catholic priest, Father Castor José Álvarez Devesa, surfaced on Sunday. Álvarez reportedly disappeared in Camagüey, one of the most active protest centers, and resurfaced under the custody of the Communist Party’s secret police.

Camagüey, in the central rural heartland of the island, experienced some of the most violent communist repression on Sunday. Local journalists and citizens recorded police publicly beating protesters. Citizens fought back with rocks – legal weapon ownership in communist Cuba does not exist – in at least one occasion successfully pushing back a police car to protect dissidents in one neighborhood. Citizens appear to begin throwing rocks after police open fire on unarmed, peaceful civilians, hitting at least one man.

An extremely dramatic video of Cuban citizens overturning a police car and standing on it in triumph also surfaced on Sunday. Sources differ on where it was taken, but it appears to be in either Havana or Cárdenas, a city about 100 miles east of the capital.

Other reports indicated heavy gunfire from police at peaceful protesters in Havana. As Havana is one of Cuba’s most densely populated urban centers, opening fire on a tightly packed crowd would likely result in significant injuries, but Cuban authorities have not issued any reports on the damage police caused at press time.

The gunfire was an apparent attempt to keep protesters out of the Plaza of the Revolution, the Spain-based Diario de Cuba reported. The Plaza is the crown jewel of communist architecture in Havana, featuring Soviet-style metal portraits of Fidel Castro, Ernesto “Che” Guevara, and other mass murderers. Diario de Cuba, citing a reporter on the ground, stated that police surrounded the Plaza and deployed a communist mob to wave photos of Fidel Castro. Police carrying baseball bats offered protection to the state-sponsored mob. Photos of the pro-Castro mob in Havana appeared in Granma, the official newspaper of the Communist Party, late Sunday appear to confirm those reports.

“We are convening all revolutionary communists to go out to the streets where these provocations are happening and confront them with firmness,” he commanded. “The order of combat is issued, revolutionaries to the streets.”

Ironically, as Cubans protest and hold up American flags, which represent freedom worldwide, many in the United States are advocating a move toward Communism. These Socialist ideas seem to gain popularity in America thanks to Universities and politicians such as Bernie Sanders. The supporters of this are largely younger generations who have not been taught what this dangerous system consistently brings.

Many Republicans have pointed to the crisis in Cuba, using it as a prime example of what socialism/communism truly breads.

Republican Marco Rubio, tweeted: “Protests in #Cuba aren’t simply about ‘shortages.’ Socialism promises guaranteed food, medicine & income if you give up your freedom. When, as always, it fails to deliver you don’t get your freedom back.”

Sen. Tex Cruz, whose family fled from Cuba, released a statement, which read: “The Cuban people have fought against the tyranny of the Communist regime for decades, and have taken to the streets demanding liberty. This regime has brutalized and denied freedom to generations of Cubans, forcing many including my family to flee or be murdered, and over the coming days will widen its violence to try to suppress the brave protesters in the streets.”

“Socialism leads to pain and suffering and Cuba is the perfect example,” Sen. Marsha Blackburn, said in her statement.

Franklin Graham recently wrote about the growing support of Socialism in the United States, warning, “Godless socialism and communism are threatening our very way of life.”

“America is under attack from within,” Graham stated. “Godless socialism and communism are threatening our very way of life in this country and the inroads already made are shocking. Even though no one has fired a shot, the battle is raging and we’d better wake up before it’s too late. It’s like some people have blinders on and don’t see the dangers of what is coming down the road.”

Jesus’s response is a detailed description of the condition of the world and what it will look like in the last days. Wars and rumours of wars, nation rising against nation, famines, pestilences, earthquakes, these being the beginning of sorrows.