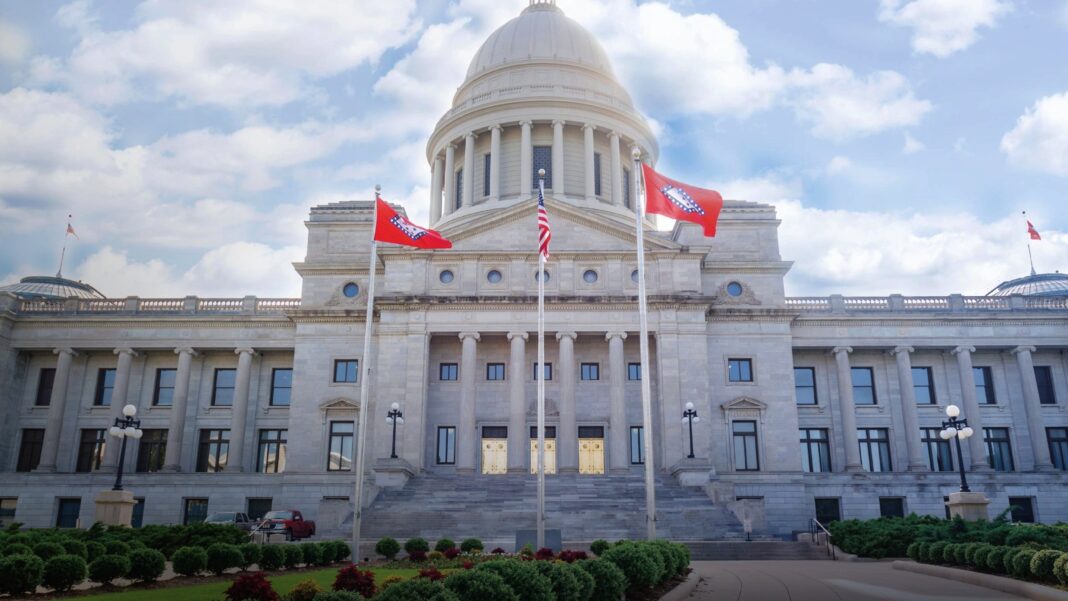 The Arkansas Senate on Monday approved a bill that would ban gender transition procedures on minors, sending it to the governor’s desk.

The Republican-controlled state Senate voted 28-7 in favor of the measure.

Katie Beck, a spokesperson for Gov. Asa Hutchinson, a Republican, said that the governor “will review the bill more closely, listen to the debate, study it and make a decision on the legislation” before deciding if he will sign the bill into law.

Procedures that are not “gender-transition” procedures will not be affected by the legislation. This includes providing services to people “born with a medically verifiable disorder of sex development, including a person with external biological sex characteristics that are irresolvably ambiguous, such as those born with 46 XX chromosomes with virilization, 46 XY chromosomes with undervirilization, or having both ovarian and testicular tissue.”

A second area not impacted by the bill include services provided when the doctor has diagnosed a disorder of sexual development via genetic or biochemical testing that shows a person “does not have normal sex chromosome structure, sex steroid hormone production, or sex steroid hormone action.”

Doctors who perform gender transition procedures on minors, or refer minors for such procedures, will be “subject to discipline by the appropriate licensing entity or disciplinary review board with competent jurisdiction in this state,” according to the bill.

Procedures affected under the bill include the prescription of puberty-blocking drugs and of cross-sex hormones, both of which carry potential side effects that can be serious. Other procedures affected include genital gender reassignment surgeries, which are irreversible and invasive procedures on male or female genitalia of children. The bill also covers non-genital gender reassignment surgeries, which cover various invasive procedures that can change or remove body parts.

If enacted, the bill would be the first of its kind in the United States. Hutchinson has five days, not counting Sunday after the bill reaches his desk, to sign or to veto the legislation. It would otherwise become law without his signature.

Sixteen other states are considering similar bills. Certain advocacy organizations, including the left-leaning civil rights advocacy group American Civil Liberties Union (ACLU), have said they are likely to sue to stop any such bills that are enacted.

Those who oppose the bill say the measures are unconstitutional and rely on outdated stereotypes.

“As a trans person, as a parent, I can’t stress enough how devastating the consequences would be,” Chase Strangio, deputy director for transgender justice at the ACLU, told a news conference on Monday, reported Reuters.

The American Academy of Pediatrics, which represents 67,000 pediatricians, has also signaled opposition to the bill. Its president, Lee Beers, said during an ACLU press conference that the measure is “discrimination by legislation.” She also said that it is “unfortunate and dangerous” to “politicize medical care,” and that the bill will interfere with the physician-patient relationship.

Meanwhile, the conservative-leaning American College of Pediatricians, which represents 600 physicians and healthcare professionals, has come out in favor of the legislation, saying affirming gender discordance too early will push young people to transition.

Supporters of the legislation say they want to protect children from irreversible procedures they could later regret, as well as the resultant potential health impacts from such procedures.

The opening text of the bill notes, “The risks of gender transition procedures far outweigh any benefit at this stage of clinical study on these procedures.”

“This bill sets out to protect children in an area where they very much need protection,” Republican state Sen. Alan Clark, a sponsor of the bill, said before the vote, reported The Associated Press.

“It is of grave concern to the General Assembly that the medical community is allowing individuals who experience distress at identifying with their biological sex to be subjects of irreversible and drastic nongenital gender reassignment surgery and irreversible, permanently sterilizing genital gender reassignment surgery, despite the lack of studies showing that the benefits of such extreme interventions outweigh the risks,” the bill’s opening text reads.