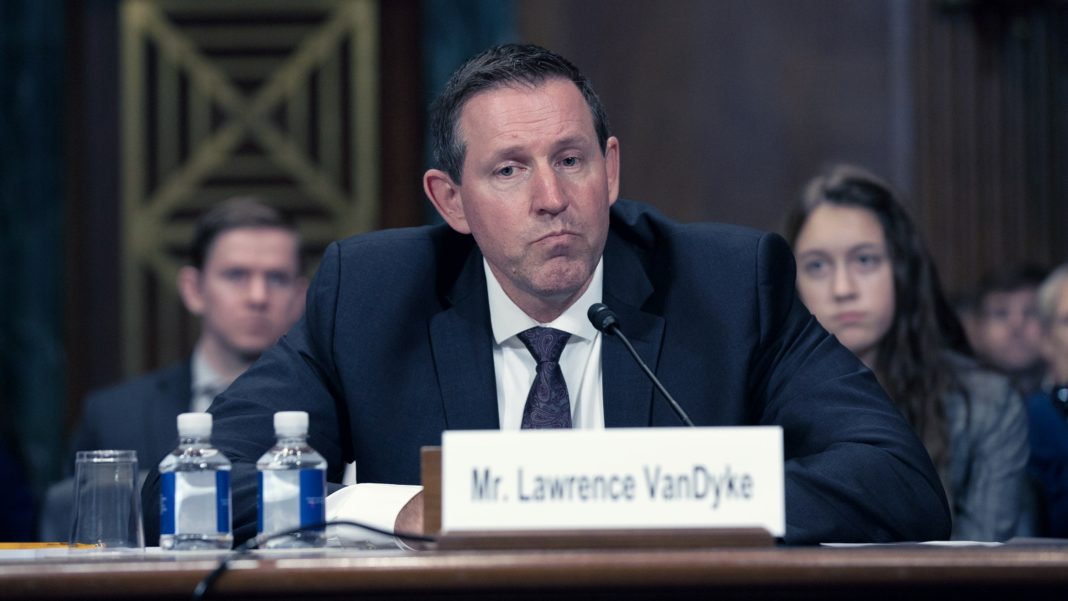 VanDyke, a Harvard Law School graduate and former solicitor general for Montana and Nevada and a professed evangelical Christian, choked back tears during the hearing after it was implied that he would be unfair to members of the LGBTQ community, despite the fact that he previously represented an LGBTQ advocacy group in a U.S. Supreme Court case.

“It is a fundamental belief of mine that all people are created in the image of God and they should all be treated with dignity and respect,” VanDyke contended.

VanDyke spent most of the hearing on the defensive after the American Bar Association (ABA) sent a scathing letter Oct. 29 to the committee claiming that VanDyke is “not qualified” to be a judge.

“Mr. VanDyke’s accomplishments are offset by the assessments of interviewees that Mr. VanDyke is arrogant, lazy, and an ideologue and lacking in knowledge of the day-to-day practice including procedural rules,” the letter read. “There was a theme that the nominee lacks humility, has an ‘entitlement’ temperament, does not have an open mind, and does not always have a commitment to being candid and truthful.”

The ABA’s letter said the evaluation was based on 60 interviews but did not reveal who or how many people expressed concerns about VanDyke.

It is widely known that Marcia Davenport, who led VanDyke’s evaluation for the ABA, had donated directly to VanDyke’s political opponent when he ran for the Montana Supreme Court. Several of VanDyke’s former colleagues described their interviews with Davenport as short and perfunctory, lasting less than five minutes.

In spite of the ABA’s accusations, both conservatives and liberals came to VanDyke’s defense.

“President Donald Trump’s judicial nominee for the 9th Circuit Court of Appeals is being attacked during his confirmation hearings,” Franklin Graham posted on Facebook. “Why? I think it’s simple—it’s because he is an evangelical Christian.”

Twenty-two current and former state solicitors general signed on to a letter to the committee, writing, “Our backgrounds, political philosophies and state interests are diverse, yet we are united in our judgment that Mr. VanDyke’s character, legal acumen and commitment to public service will make him an exceptional member of the federal branch.”

“The American Bar Association’s subversive attack on Lawrence VanDyke should shock all Americans,” said Hiram Sasser, First Liberty Institute’s general counsel. “This eleventh-hour attack and attempted character assassination of a brilliant lawyer was spearheaded by VanDyke’s former political opponent, and it should be rejected without further consideration.”

Although Tony Perkins, president of Family Research Council, vehemently disagreed with the ABA’s treatment of VanDyke, he acknowledged a possible silver lining: “Thanks to this administration, groups like the ABA—who’ve been hiding out as ‘neutral’ parties for years—are starting to be exposed for their unapologetic left-leaning stance. As painful as this parade of character assassination has been for the president’s picks, it could be the force the Senate needs to reconsider how it conducts its confirmation business.”

“Prosecution blames mental illness for the crime. We join AJC in calling for the attack to be recognized for what it is—an act of Jew-hatred"
Read more