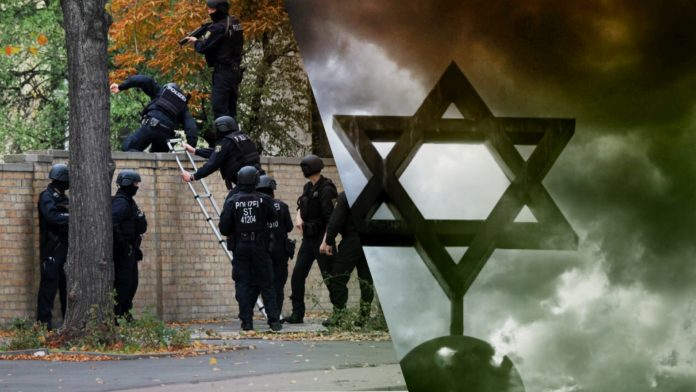 A gunman at a German synagogue ranted about feminism, immigration and the Holocaust before he shot two people dead in a live-streamed rampage on Judaism’s holiest day today.

The shooter killed a man and woman, threw a grenade into a Jewish cemetery and left explosives near the synagogue in Halle after failing to force his way inside while worshippers prayed on Yom Kippur.

The suspect, named by Bild as 27-year-old Stephan Balliet, was later arrested after trying to flee in a taxi, according to German media.

This evening Germany’s interior minister said it appeared to be an anti-Semitic attack, possibly motivated by right-wing extremism, while Chancellor Angela Merkel offered her ‘deep sympathy’.

Wearing military fatigues and a helmet camera, the gunman shot a woman dead in the street after she confronted him outside the synagogue, where around 80 people were praying.

Another man was then shot dead after the gunman drove to a kebab shop close to the synagogue before opening fire a second time.

Video taken outside the shop shows him firing what appears to be a shotgun into the street and his face is then revealed as he walks back up the road.

In the 35-minute video he bemoaned his failure to get inside the synagogue and talked about the Holocaust, women’s rights and immigration, blaming ‘the Jews’ as the root of various problems.

Witnesses said the attacker also used a submachine gun during the attack and threw a grenade into the Jewish cemetery after shooting at the door of the synagogue to no effect.

Improvised explosive devices were also left outside the front of the synagogue as the terrified congregation barricaded themselves inside.

Halle residents were initially urged to stay inside while police hunted for a possible second attacker, but authorities now believe there was only one gunman.