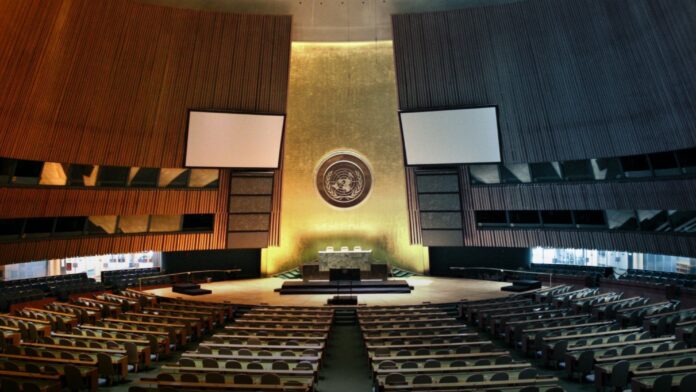 The United Nations General Assembly called on Israel to “renounce possession of nuclear weapons” in a 153-6 vote on Monday, with 25 abstentions.

Israel was asked “not to develop, produce, test or otherwise acquire nuclear weapons.”

The UNGA further called on the Jewish state “to renounce possession of nuclear weapons and to place all its un-safeguarded nuclear facilities under full-scope Agency safeguards as an important confidence-building measure among all States of the region and as a step towards enhancing peace and security.”

Israel is presumed to be one of the world’s nine nuclear powers, but it has never admitted to the possession of nuclear weapons.

There are eight countries acknowledged to be nuclear powers, five of which having signed the Treaty on the Non-Proliferation of Nuclear Weapons. The five signatories are: China, France, Russia, the United Kingdom and the United States.

Three additional countries, which are not signatories to the treaty, have admitted to testing and possession nuclear weapons: India, North Korea and Pakistan.

Overall, 191 countries are party to the treaty, including Iran but not Israel.

In New York on Monday, 153 countries called exclusively on Israel to sign the Non-Proliferation Treaty and renounce its weapons in the resolution titled, “The Risk of Nuclear Proliferation in the Middle East.”

The resolution was part of a large package of resolutions approved by the General Assembly in New York, calling for nuclear disarmament globally and in the region. It is also part of a package of close to 20 annual UNGA resolutions considered to be anti-Israeli and pro-Palestinian.

The Palestinian Authority was among the sponsors of this non-proliferation resolution, as were Egypt, Jordan, Saudi Arabia, Oman and the United Arab Emirates.

The six countries that opposed the resolution were: Canada, Israel, the Marshall Islands, Micronesia, Palau and the United States.

Israel gained support from Croatia, which shifted from a “yes” vote last year to abstaining.

Separately, the UNGA voted 174-2, with one abstention, on a resolution that called for a nuclear free zone in the Middle East. Only Israel and the United States opposed it, with Cameroon abstaining.