The storm that has left scenes of devastation in its wake is moving north into France but not before causing havoc in Spain’s northeastern corner.

The River Ter in Girona burst its banks on Thursday as a result of torrential rainfall brought by Storm Gloria.

Residents in 26 zones around the River Ter were told not to leave their homes but to stay in upper levels of buildings until the floodwater recedes.

Images show bridges that had been destroyed, including a railway bridge that was swept away leaving the tracks hanging over the torrent. Some roads remained blocked and transport continued to be disrupted into Thursday afternoon.

Drivers were warned not to attempt to drive their vehicles through the floods and never to try and cross flowing water.

Eleven people have lost their lives in the storms and five are still missing with three search parties out in the Balearic Islands and two in Catalonia.

The storm damage caused is estimated to be in the millions across Spain’s eastern Mediterranean coast and the Balearic Islands who have declared themselves a “catastrophe zone” and will seek financial aid from Spain’s central government.

Prime Minister Pedro Sanchez visited some of the worst affected areas in Catalonia by helicopter on Thursday.

The AEMET meteorological agency predicts the storm to let up on Thursday but has left yellow warning in four provinces of Catalonia in the Pyrenees area along the border with France as well as yellow and amber warnings in Andalucia.

The latest death was that of a man whose body was found in a flooded river near Jorba, some 70 kilometres (45 miles) northwest of Barcelona, the emergency services said.

Rescuers in Catalonia had been searching for a missing person in the same area but said it was too early to confirm if it was him.

Catalan rescuers had late on Wednesday found another body of a man who died after falling into the water in Palamos, a port town about 100 kilometres up the coast from Barcelona.

They are also searching for a man who went missing from a merchant ship in the same area, as well as a person in Cadaques near the French border.

Earlier on Thursday, regional officials confirmed the death of a 75-year-old woman whose house collapsed because of heavy rain in Alcoi, a town in the eastern Alicante region.

On the Balearic Islands rescuers are still searching for three people, including a 25-year-old Briton who went missing on a beach in northern Ibiza, and a 27-year-old Spaniard who disappeared in Mallorca while practising canyoning — a mix of rappelling, climbing and watersliding through deep gorges.

Rescuers had found three other bodies on Wednesday, including that of a 67-year-old man who went missing in his car near the southeastern resort town of Benidom.

They also found two bodies in the southern Andalusia region, one of a 77-year-old man who died when a greenhouse collapsed on him in a hailstorm in Nijar as well as that of a homeless man who died of hypothermia. 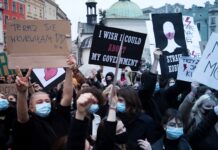