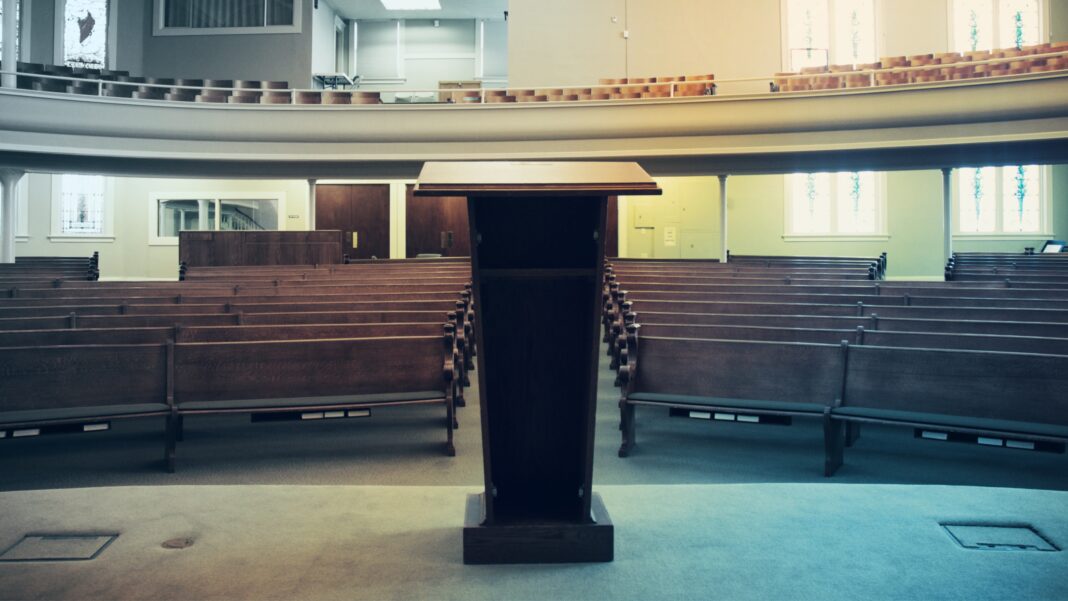 Canadian Pastor James Coates of GraceLife Church held services this weekend. Normally, this would be an unremarkable fact – but given he was recently been released from jail only to see his church fenced off and shut down by authorities, it’s made this worship service all the more impactful.

Earlier today, GraceLife published their service online, with congregants faces blurred out of the picture.

Pastor Coates greeted those in attendance at the “undisclosed location” by saying, “they can take our facility, but we’ll just find another one.”

A few moments later, two gentlemen (who were only identified in the video as Joe and John) came forward to lead the congregation in song. One of the men began by saying, “Did you ever think you’d be part of the underground church?”

A few songs in there’s a beautiful rendition of “It is Well With My Soul” in which the congregation can be clearly heard singing, despite their profiles being intentionally blurred out so as not to be identified on video.

After singing concluded, Pastor Coates took to the microphone to deliver his sermon. Coates said he had been planning to preach from Psalm 56, but said he’d had a nagging feeling that it wasn’t the right Psalm for the upcoming service. After the church was shut down, he said it was confirmation he needed to change course.

Where did he end up?

“We need a Psalm more appropriate for an occasion like this. We need to hear a ‘Jesus is Lord’ kind of sermon,” he explained. That led Coates to Psalm 2, in which he says “As we read Psalm 2, I want you to consider that what we see taking place in this Psalm though it really describes something yet future to us, is a sense in which this is taking right now at present,” Coates said.

He then went on to read Psalm 2, which says:

Psalm 2:1-12 KJV – “Why do the heathen rage, and the people imagine a vain thing? The kings of the earth set themselves, and the rulers take counsel together, against the Lord, and against his anointed, saying, Let us break their bands asunder, and cast away their cords from us. He that sitteth in the heavens shall laugh: the Lord shall have them in derision. Then shall he speak unto them in his wrath, and vex them in his sore displeasure. Yet have I set my king upon my holy hill of Zion. I will declare the decree: the Lord hath said unto me, Thou art my Son; this day have I begotten thee. Ask of me, and I shall give thee the heathen for thine inheritance, and the uttermost parts of the earth for thy possession. Thou shalt break them with a rod of iron; thou shalt dash them in pieces like a potter’s vessel. Be wise now therefore, O ye kings: be instructed, ye judges of the earth. Serve the Lord with fear, and rejoice with trembling. Kiss the Son, lest he be angry, and ye perish from the way, when his wrath is kindled but a little. Blessed are all they that put their trust in him.”

He titled the sermon “A Vain Thing” and after explaining the context of Psalm 2, went on to discuss how Psalm 2 paralleled today in various ways. He said, “governments all over the world are counseling together in a unified effort to oppress the people they govern.”

“In that context, those who are faithful, those who follow Christ and confess that Jesus is Lord are going to be the ones they have to silence and get out of the way because everyone else is going to fall in line.”

“It’s going to be the Lord’s people who stand and herald him as king and call governments to submit to him as king and to govern in accord with the very Word that will judge them on judgement day. Even as we think about our own government, we have called them to their duty. Unmistakably, we have directed them to their duty. They know they are going to be judged in accord with the Word of God, that the Word of God is going to be the standard with which they are assessed and evaluated and they still continue to persevere in their obstinacy. This is defiance.”

After the sermon and prayer, the service closed with a singing of How Great Thou Art and a word from 2 Thessalonians 2:16-17, which reads:

“Now may our Lord Jesus Christ himself, and God our Father, who loved us and gave us eternal comfort and good hope through grace, comfort your hearts and establish them in every good work and word.”

In a statement issued to the media Sunday, the RCMP said it was on the scene in Edmonton to preserve “peace” and “maintain public safety,” claiming — as it has been barring the free exercise of religion — that it recognizes “everyone has a right to peaceful freedom of expression.”

One video circulating on social media showed what appeared to be a great deal of RCMP officers at GraceLife on Sunday.

California-based Pastor John MacArthur commended the members of GraceLife as they have begun meeting privately amid a continued government crackdown on their freedom to hold worship services.

In an email to Faithwire Monday morning, GraceLife Associate Pastor Jake Spenst confirmed the church is meeting at an undisclosed location and broadcasting its services on YouTube.

“Amazing to have an underground church in Canada,” said MacArthur, pastor of Grace Community Church in Sun Valley. “This because the government of Alberta triple-fenced the church in and locked it so people couldn’t get there.”

The American preacher said there is now “a massive outcry” of support for the Canadian church as it continues to face intense restrictions.

The RCMP — at the behest of Alberta Health Services — erected the three-layer fence around the Edmonton church’s building last Wednesday and, on Sunday, locals disturbed by the raid and subsequent closure tore down the chain-link barrier as they protested the government and police.

Somewhere between 300 and 400 demonstrators reportedly showed up at the church’s facility Sunday and began singing Christian hymns.

The Justice Centre for Constitutional Freedoms, the law firm representing GraceLife and its formerly jailed pastor, James Coates, said in a statement that, while they appreciate “the public outpouring of support to fully open churches in Alberta,” GraceLife congregants did not participate in the demonstration outside the facility.

“GraceLife Church has no control of our church or grounds at this time,” read the statement. “The church grounds are fully under the responsibility and control of the RCMP and Alberta Health Services. The closing of the GraceLife facility has understandably resulted in significant public outrage and caused even larger crowds to gather in one place.”

“Albertans have a constitutional right to assemble, associate, and worship,” it continued. “By taking the measures the government has, while the matter is still pending before the courts, the Alberta government has created an even more divisive situation.”

MacArthur pointed out that, of the 4.4 million people living in Alberta, the province has recorded 2,013 COVID-19 deaths, more than half of which were people aged 80 years and older.

Citing those statistics, MacArthur said the Albertan government has “no legitimate reason” to forcibly shutter GraceLife for continuing to hold worship services in defiance of an Alberta Health Services order mandating the church limit its attendance to just 15% of its facility’s total occupancy.

“This is a first for the Western world,” MacArthur said, “to have the government lockout believers from a church.”

As protesters began tearing down the fencing around GraceLife, which was allegedly first approved by Alberta Health Minister Tyler Shandro, RCMP officers starting putting the barrier back up, according to a report from Western Standard. The outlet noted that “dozens of RCMP cruisers” blocked access to the roads leading to the GraceLife worship center.

Shandro, it should be noted, has denied approving the barricade.

Ahead of his sermon Sunday, MacArthur read a letter from Coates, a graduate of the seminary affiliated with Grace Community Church, thanking the California congregation for its steadfast support of him and GraceLife.

The provincial government has dropped most of its charges against Coates, who was released from jail in late March after spending a little more than a month behind bars. The pastor does, however, still face a fine of $1,500 and a charge for violating health orders on capacity limits.

His trial is scheduled to begin May 3, but government officials are attempting to delay the court hearings.

John Carpay of the Justice Centre is arguing there is no reason for a delay because the government has known “for many months” that it would be called to make the case in court for its burdensome lockdowns and COVID-19 restrictions. In a statement issued last week, Carpay said the government has had more than a year “to assemble proper medical and scientific evidence to justify lockdowns” and does not need more time.

He went on to rebuke the restrictions as “unconscionable and completely undemocratic.”

“Why is the government afraid of tough questions?” Carpay asked. “And why, in our 13th month of lockdowns, with three months’ notice of the trial set for May 3, does the government require until July 2021 to assemble medical and scientific evidence?”

The wife of Pastor Coates took to social media recently, saying, although they may have blocked off the area and chained the doors, the “Church isn’t a building” but instead “a blood-bought people”:

This is what happens when you have freedom of religion in a free and democratic society: they jail your pastor for freely opening the doors of the church and serving Christ’s sheep and hurting people. Now they’ve chained the doors of GraceLife Church enclosing in chain link fence. This is all under the guise of a health order. Too bad the Church isn’t a building, it’s a blood-bought people – Christ has and will prevail. We have an enemy and that enemy has been defeated by the death and resurrection of Christ. For all those who find satisfaction in this – you cannot stop the gospel. The name of Jesus Christ will go forth with even more power and conviction. The Word of God will sound out across this nation accomplishing all the work God has ordained to glorify Himself. I pray for all the pastors and Christians that still think this is about a virus and health order. Clearly, our Charter and criminal code mean nothing as long as the government can come up with a good enough story to disregard it. God have mercy on our nation. I pray for their souls. They are clearly under Your judgment.