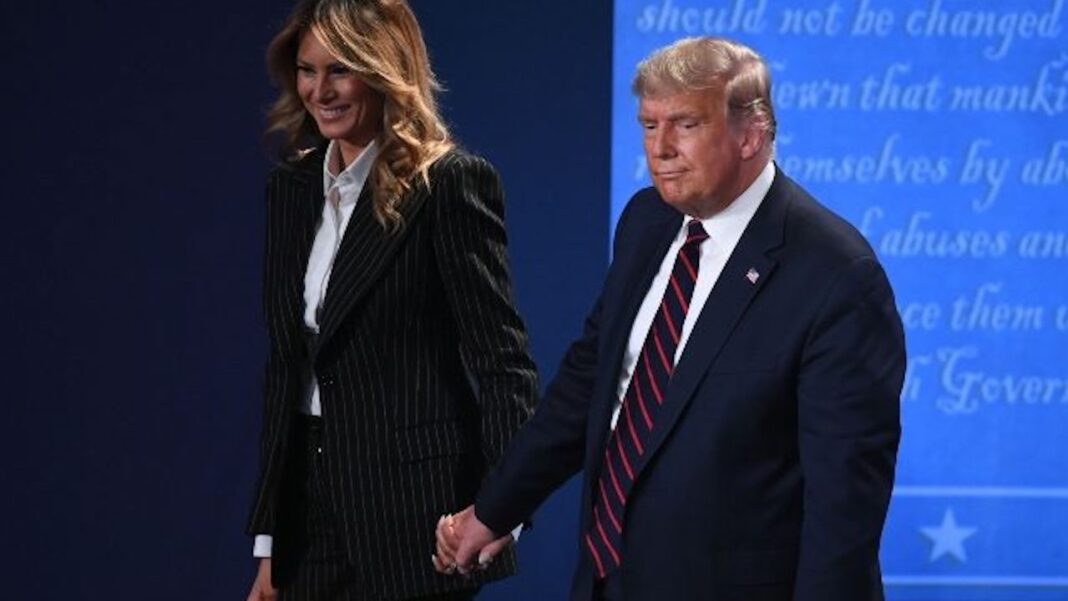 President Donald Trump announced that he would leave Walter Reed Medical Center Monday at 6:30 p.m. after being treated for the coronavirus.

“I will be leaving the great Walter Reed Medical Center today at 6:30 P.M.,” he wrote on Twitter. “Feeling really good!”

The president’s physicians are expected to brief reporters on the president’s condition shortly. The president was transferred to the hospital on Friday and remained there over the weekend.

Trump offered some advice for Americans, after personally experiencing the fight with the virus.

“Don’t be afraid of Covid,” he wrote. “Don’t let it dominate your life. We have developed, under the Trump Administration, some really great drugs and knowledge.”

The president praised the medical care received by the doctors and medical staff at Walter Reed.

On Sunday, President Trump indicated that his experience with the virus had taught him a lot about the disease.

“I learned a lot about COVID,” he said in a video posted to Twitter. “I learned it by really going to school, this is the real school, this isn’t the ‘Let’s read the book school’ and I get it, and I understand it.”

The president’s physician Dr. Sean Connley said that it was important to get patients out of the hospital.

“The president has been a phenomenal patient,” Conley said, and added, “He has never once pushed us to do anything that was beyond what is a safe and reasonable practice.”

President Donald Trump surprised supporters on Sunday by taking a slow drive-by in an SUV past the crowd showing support for him as he is treated for the coronavirus at Walter Reed hospital.

The president, wearing a mask and seated inside a Secret Service SUV, waved at his supporters as they cheered and waved back.

Prior to his visit, White House staff posted a video of the president on Twitter previewing a “special surprise.”

“I learned a lot about COVID [Chinese coronavirus],” he said in the video. “I learned it by really going to school, this is the real school, this isn’t the ‘Let’s read the book school’ and I get it, and I understand it.”

Fox News – President Trump could return to WH ‘as early as tomorrow’ if conditions continue to improve, doctors say

President Trump could be released from the Walter Reed National Military Medical Center as soon as Monday, his medical team said in an update Sunday to members of the White House press pool, as the president continues his treatment on dexamethasone and Remdesivir to fight coronavirus.

At that point, Conley recommended supplemental oxygen treatment due to concerns about the possible rapid progression of the disease. Trump was adamant he did not need the treatment, but it was nevertheless administered for about an hour at the White House.

He began showing milder symptoms and began moving about his residence at the White House, but, despite these improvements, Conley said the medical team determined the best course of action was to transfer Trump to Walter Reed in Bethesda, Md., by Friday afternoon for a more thorough evaluation and monitoring.

Dr. Sean Dooley, a pulmonologist at Walter Reed, said the president has remained without a fever since Friday morning and his cardiac, kidney and liver functions are all still normal. He said Trump has not shown signs of shortness of breath and was walking around his medical unit without limitation or disability.

Dr. Brian Garibaldi, with Johns Hopkins Hospital in Baltimore, said Trump has completed his second dose of Remdesivir and has exhibited no side effects as far as his team can tell. His team will therefore continue plans to keep him on the medication over a five-day period. In response to transient low oxygen levels, the president also has begun dexamethasone therapy and was given his first dose Saturday.

Garibaldi said the president feels well Sunday and the team plans to have him eat and be up and about as much as possible to be mobile, and “if he continues to look and feel as well as he does today, our hope is that we can plan for a discharge as early as tomorrow to the White House where he can continue his treatment course.”

President Trump is “doing very well” and has no difficulty breathing, his medical team said Saturday — although a senior administration official warned that the next 48 hours will be “critical.”

White House physician Dr. Sean Conley and other members of the medical team briefed reporters on Trump’s condition. Conley said they were “extremely happy with the progress” Trump is making.

“This morning, the president is doing very well,” he said.

However, a senior administration official told Fox News that on Friday morning, Trump was showing troubling signs of a possible progression from mild to more severe form of the disease.

The official said that medical professionals moved quickly and decided to transfer the President to Walter Reed out of an abundance of caution over what was seen as a very concerning trajectory of disease progression.

“Twenty-four hours ago, there was real concern about the President’s vitals,” the official said. “For the past 12 hours, there has been zero concern.”

The official added: “Early indications are for an extremely good prognosis – but the next 48 hours will be critical.”

At the press conference, Dr. Sean Dooley said that cardiac, kidney and liver functions are all normal, that Trump is not on oxygen and is not having any difficulty breathing or walking.

He quoted Trump as saying: “I feel like I could walk out of here today.” Separately, Dr. Brian Garibaldi described Trump as being in “such great spirits.”

The doctors also said Trump had been fever-free for 24 hours, and that symptoms of a nasal cough and fatigue had all “resolved.” However, they did not give a date for when Trump may leave the center.

Conley reiterated that Trump had received an antibody cocktail, as well as zinc, Vitamin D, famotidine, melatonin and a daily aspirin. He also said Trump was taking a five day course of Remdesivir.

Conley caused some confusion on Saturday when he said they were “72 hours into the diagnosis,” suggesting that Trump was actually diagnosed on Wednesday. However, he later clarified in a memorandum that he meant to say it was “day three” of the diagnosis — since Trump was diagnosed on Thursday.

Separately, he said that Trump had received the antibody cocktail “48 hours ago” when he meant to say “day two.”

“The President was first diagnosed with COVID-19 on the evening of Thursday, October 1st and had received Regeron’s [sic] antibody cocktail on Friday, October 2nd,” he said.

Trump was moved to the medical center later Friday after suffering symptoms that the White House described as mild. Mrs. Trump, meanwhile, was described as “doing great” on Saturday by the medical team.

Trump, meanwhile, praised the staff at Walter Reed in a tweet, and said he is “feeling well.”

“Doctors, Nurses and ALL at the GREAT Walter Reed Medical Center, and others from likewise incredible institutions who have joined them, are AMAZING!!!” he tweeted. “Tremendous progress has been made over the last 6 months in fighting this PLAGUE. With their help, I am feeling well!”

President Trump is being transported to Walter Reed National Military Medical Center roughly eighteen hours after he announced that he and the First Lady had tested positive for COVID-19, the White House said in a statement.

The president was seen departing the White House late Friday afternoon, wearing a suit and a face covering while walking to an awaiting helicopter on the South Lawn.

“Out of an abundance of caution, and at the recommendation of his physician and medical experts, the President will be working from the presidential offices at Walter Reed for the next few days,” White House Press Secretary Kayleigh McEnany said in a statement late Friday afternoon.

The president “remains in good spirts, has mild symptoms, and has been working throughout the day,” she added.

The president received an experimental antibiotic “cocktail” after his diagnosis with COVID-19, White House physician Sean Conley said earlier in the day.

“As of this afternoon the President remains fatigued but in good spirits,” Conley continued, stating that the president is “being evaluated by a team of experts.”

First Lady Melania Trump, meanwhile, “remains well with only a mild cough and headache,” Conley said. The rest of the First Family tested negative for COVID-19 today, he added.

FRANKLIN GRAHAM via Facebook – Please Join Me In Praying

Early this morning, President Donald J. Trump and First Lady Melania Trump announced that, like many other Americans, they have tested positive for the coronavirus. Please join me in praying especially for them, that they would have a quick recovery.

DR. ROBERT JEFFRESS – Why All Americans Should Pray for the President

Dr. Robert Jeffress interview on “Lou Dobbs Tonight” discussing why all Americans should pray for the President.

BREITBART – President Donald Trump announced shortly after midnight that he and First Lady Melania Trump had tested positive for coronavirus.

The president said he and the First Lady will be going into their “quarantine and recovery process immediately.”

The First Lady added in her own tweet that she and the president are “feeling good” and she has “postponed all upcoming engagements.”

The news of Trump’s positive test came hours after it was earlier confirmed that his close aide Hope Hicks had tested positive for the virus earlier on Thursday after exhibiting symptoms during Trump’s trip to Duluth, Minnesota, for a rally on Wednesday night.

Trump’s announcement that he has contracted coronavirus after had earlier told Fox News’ Sean Hannity that he and the First Lady would go into quarantine after exposure to Hicks. He also tweeted that earlier in the evening:

It is unclear how the president contracted the virus, and it is unclear exactly when he did so.

A letter from Trump’s physician released for the public says the president and First Lady are “both well at this time” and they intend to stay at the White House “during their convalescence.” The letter, from Dr. Sean Conley–Physician to the President and a U.S. Navy Commander–also says that Trump will continue to execute the duties of the office of the president during this time “without disruption.”